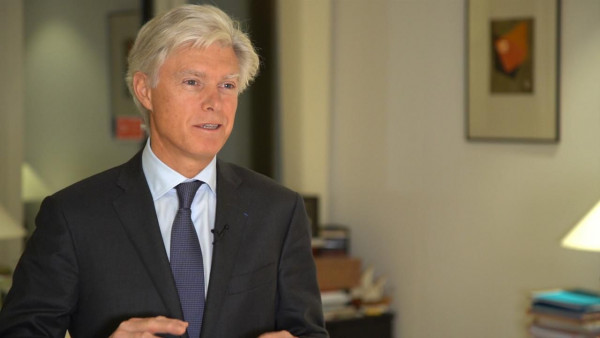 Arnaud Breuillac, President – Exploration&Production, TotalEnergies, has confirmed his attendance and participation at African Energy Week (AEW) 2021 taking place in Cape Town on the 9th-12th of November. Representing one of the seven supermajor oil companies worldwide, and one of Africa’s most active oil and gas explorers and producers, Breuillac’s participation at AEW 2021 is significant and speaks to the caliber of the event as Africa’s premier energy conference. By networking and participating in AEW 2021’s comprehensive event program, Breuillac will promote the role of oil and gas in Africa’s energy future, showcase some of TotalEnergies greatest achievements, and emphasize the value of an Africa-centric energy transition in which natural gas plays a major role.

Active in more than 130 countries worldwide and with an extensive footprint across the African continent, TotalEnergies is one of Africa’s top oil explorers and producers – producing more than 900,000 barrels of oil equivalent per day in 2019. TotalEnergies remains committed to exploring Africa with several large-scale E&P projects, and Breuillac’s participation at AEW 2021 will only enhance the company’s objectives in this area. Notably, the French oil major’s production in sub-Saharan Africa predominantly focuses on Angola, Nigeria, the Congo and Gabon - the Gulf of Guinea makes up 25% of the company’s production. With existing exploration stakes in the Gulf of Guinea, the company has redirected its attention to exploration within West Africa – through stakes in Mauritania, Senegal, Guinea and Côte d'ivoire – as well in Southern Africa with stakes in Namibia and South Africa. If early seismic data is to be believed, compared to Angola there is equal, if not even more, promise in new discoveries offshore Namibia. Currently, all eyes are on Total’s possibly play-opening Venus 1- prospect, which may turn out to be the largest discovery in Africa in a decade. An ultra-deepwater well in the Orange Basin, which straddles the border with South Africa, Venus-1 is thought to have at least 2 billion barrels of oil in place. If Venus-1 is successful, it’s like to attract even more attention to the area. Fortunately, the Namibian government’s oil-friendly policies make it easy for foreign companies to do business there. The fiscal regime is positive, and the state-owned oil company, the National Petroleum Corporation of Namibia (NAMCOR), is a cooperative partner. It also helps that Namibia is politically stable and has some of the best-developed infrastructure on the continent, including a modern electricity distribution grid. Like its neighbors to the west, South Africa has been the site of considerable excitement over frontier discoveries, including Total’s Brulpadda, which opened up the Outeniqua basin in 2019. Brulpadda is considered a world-class oil and gas play that holds as much as 1 billion barrels of oil equivalent of gas and condensate light oil.

In line with AEW 2021’s oil and gas agenda, Breuillac’s participation will enhance a discussion on African E&P, showcasing the company’s achievements and future objectives.

Meanwhile, in addition to being one of Africa’s biggest oil explorers, TotalEnergies has turned a focus to natural gas, recognizing the role of the resource as an intermediary in the energy transition and capitalizing on the vast opportunities present in African markets. Notably, some of TotalEnergies most significant natural gas projects in Africa include the $20 billion Mozambique Liquified Natural Gas (LNG) project; the $4 billion Nigeria LNG Train 7 project; and the $12 billion integrated LNG project in Soyo, Angola. By emphasizing the value of these projects, and initiating a discussion on the role of natural gas in Africa, Breuillac will drive the discussion on the role of natural gas.

“Breuillac’s participation at AEW 2021 in Cape Town emphasizes that oil and gas continue to have a significant role to play in Africa’s energy future. We are proud to host representatives from one of the world’s supermajors, and are excited for the valuable input and dialogue that Breuillac will present at AEW 2021. The African Energy Chamber (AEC) is a strong advocate for both oil and natural gas, and by providing a platform whereby a discussion on the integration, rather than elimination, of oil and gas can be presented, AEW 2021 aims to drive investment and associated economic growth across Africa,” stated NJ Ayuk, Executive Chairman of the AEC.

Despite being a strong advocate for oil and gas, TotalEnergies has placed sustainable performance, environmental safeguarding, and Corporate Social Responsibility at the heart of its operations. With an ambition to become a world leader in the energy transition, and the uptake of renewable energy developments comprising a significant part of the company’s portfolio, TotalEnergies intends to manage its operations with the aim of working in a sustainable, active and positive manner in all host countries. By incorporating clean energy into its portfolio, and redirecting a focus on renewable energy opportunities in Africa, TotalEnergies aims to address the two-fold challenge prevalent in Africa today: satisfying the energy needs of an ever-growing world population while reducing global warming.

In realizing the company’s ambitious target of reaching carbon neutrality by 2050, TotalEnergies has executed a series of initiatives to reduce greenhouse gas emissions at its operations while ensuring development and associated economic benefits in host countries are not at risk. By improving energy efficiency, eliminating routine flaring, electrifying its processes and reducing methane emissions, TotalEnergies is not abandoning oil and gas for renewables, but is focusing on an integrated approach to energy.

By promoting the utilization of oil – ensuring operations are environmentally friendly and efficient – as well as the role of natural gas in providing a cleaner and more reliable energy source in the long-term, TotalEnergies emphasizes an adapted energy transition vital for Africa’s economic growth. Breuillac’s participation at AEW 2021 will only further promote Africa’s energy transition by emphasizing the role that oil and gas continues to play in Africa’s energy future.