In the hunt for Dubai's most affordable supermarket, Souqalmal.com puts six of the top supermarket chains in the region to the ultimate price comparison test. Read on to find out where to get the best value for your money.

For the frugal shopper, the preferred choice of supermarket is one of the hardest decisions to make. As grocery retailers battle for market share, the average consumer gets the benefit of broad selection of groceries and low prices. We compare the cost of 11 everyday essentials at the most popular supermarkets in Dubai to help you decide on the best value chain to buy your groceries.

Here’s our bill at each… 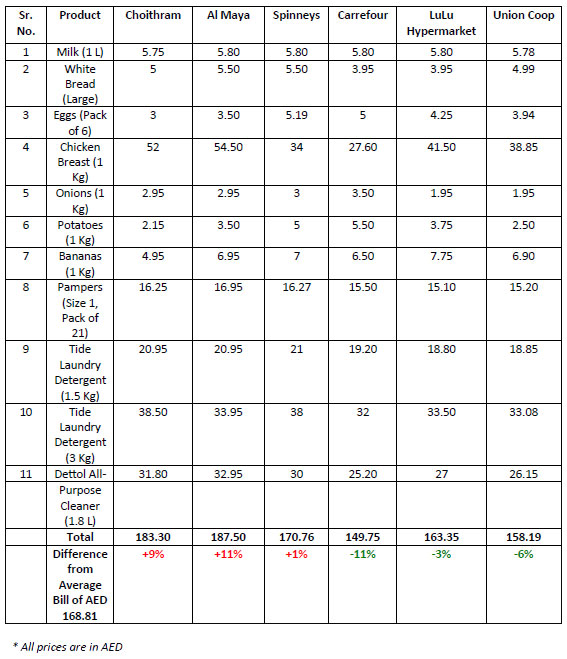 * All prices are in AED

In a bid to sustain growth and strengthen their brand, supermarkets are increasingly offering their house brands alongside name brands.

Our analysis revealed that while there is a smaller difference in the price of name brand items between different supermarkets, the price of house brand items varies significantly. It is only fair that we compare some products like eggs, chicken and bread from the supermarket private label brands in order to get a better idea of the actual retail chain pricing. The quality of private label meat, poultry and baked goods between different supermarkets, however, can be argued upon.

Ambareen Musa, Founder & CEO of Souqalmal.com says, “By stocking home brands on their shelves, supermarkets are competing with premium name brands for a slice of the market share. Ultimately, this works in favour of consumers who get more economical options to choose from.”

So which supermarket won the price test?

Based on the scope of our research, Carrefour emerged as the best value for money supermarket in Dubai with a total bill that was 11 per cent lower than our average bill across all the six supermarkets surveyed. Union Coop and Lulu Hypermarket came almost neck-to-neck, bagging the second and third spot, respectively. Al Maya was revealed to be the most expensive grocery retail chain (with an 11 per cent higher bill than average) while Choithram trailed just behind.

Musa adds, “While the prices that shoppers see in supermarket aisles play a big role in how they choose supermarkets and specific brands, there’s more to the story. Supermarkets also compete in terms of customer loyalty programs or ‘club cards’. This aspect needs to be factored in to better understand why consumers may prefer a certain supermarket over others.”

“Loyalty programs are big in the UAE – In fact, the results of our recently concluded annual analysis showed that co-branded credit cards that offer loyalty rewards at supermarkets were the most popular credit card variant among UAE residents.”

While major UAE supermarket chains have not yet resorted to aggressive price wars and price-matching schemes as seen in other global markets, it remains to be seen if this will change in the near future.

Souqalmal.com is the biggest personal finance comparison website in the UAE and Saudi Arabia, allowing users to compare personal finance products such as Credit Cards, loans, bank accounts and Insurance.

Envisioned as a highly transparent marketplace, Souqalmal.com empowers consumers to make the right choice by bringing together on one convenient platform all the latest details on more than 3,200 banking, Insurance and education products offered by providers in the UAE and Saudi Arabia.

Since Souqalmal.com launched its Insurance aggregator portal in June 2016, it has become the fastest growing retail car Insurance platform in the country, offering the widest selection of coverage to UAE residents. With its instant quotes, the platform provides unprecedented levels of ease and convenience for time-crunched residents buying car Insurance. Souqalmal.com won “Best Technology Firm” at the 2017 MENA Insurance Awards, which further solidifies the role that it is currently playing in the InsurTech arena. For more information visit: http://www.souqalmal.com