Migration flows to US, Canada, other OECD states fall 30% due to COVID-19

The number of people migrating to OECD countries, which are mainly wealthy industrialised economies, has plummeted by more than 30 percent due to the coronavirus pandemic, according to the latest OECD report.

Total migration flows to OECD states reached 3.7 million in 2020, the lowest level since 2003. The number of individuals moving overseas for work dropped significantly, with labour migration falling by about 24 percent, the OECD International Migration Outlook 2021 reported.

All other categories of migration, including family, humanitarian and intra-company transfers also dropped.

Notable declines were reported in humanitarian migration flows to countries like the United States and Canada, as well as temporary labour and intra-company movements, which fell by 58 percent and 53 percent, respectively.

“The COVID-19 pandemic has also wiped out much of the progress in migrant integration achieved across OECD countries over the past decade… Governments should urgently pursue comprehensive and coordinated action to avoid the pandemic leading to a lasting setback on migrant integration, which would have major negative economic consequences,” the report said. 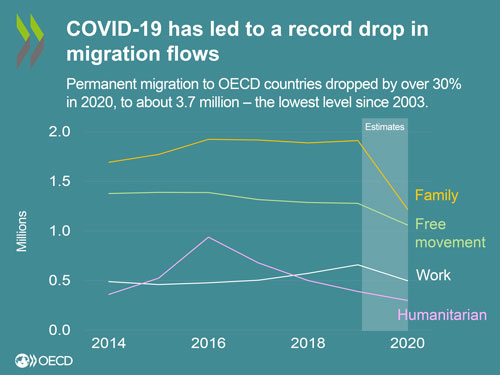 OECD countries include developed and high-income states like the United Kingdom, United States, Switzerland, France, Germany, Canada and Australia, among many others.

Studies have shown that migrants contribute to the economic growth in their host countries by boosting local demand, consumer spending, productivity levels and tax payments.

“While there are differences across them, overall migrants contribute more in taxes and contributions than they receive in health, education and social protection,” the report said.

“Better integration of immigrants can further the fiscal gains. For example, just closing the employment gap between working-age migrants and native-born of the same age and education level could increase the total net fiscal contribution of migrants by over one-third of a GDP percentage point in one in three countries.

The report also highlights the need for governments to consider how they can promote better integration of migrants.

“This will require broadening the focus of integration policies, as well as coordinated action across policy domains, such as health, labour, education and housing,” the report said.

“Given migrants’ overrepresentation among those in low-skilled jobs, attention needs to be paid to ensuring that migrants can acquire the skills to fill the jobs of the future. This requires addressing the training gap between migrants and native-born.”

The UAE, which is not part of the OECD group of countries, has been rolling out a series of legal reforms and initiatives to attract more expatriates, as well as foreign investments.

Like most countries worldwide, the UAE has also seen a decline in its expatriate population, considering the tens of thousands of foreigners who were repatriated last year due to the pandemic.

However, while the expat population has declined since the start of the pandemic, Dubai saw 2,000 millionaires moving into the emirate during the first six months of the year, according to New World Wealth.

Validity of iqama, re-entry and visit visas in Saudi extended till January 31

Omicron variant: Here are the latest protocols for travellers to India

House prices jump 21% as rich flock to Dubai, but 2021 could be peak of current property cycle

Russian rouble recovers from over seven-month low vs dollar

Australia looks set for May 2022 election as budget brought forward