The RoE has reached its highest level of 10.9 percent for the first time in the last five quarters with 13.3 percent in Q4’19 as economic conditions continue to improve.  An increase of +2.8 percent quarter over quarter (QoQ) in operating income coupled with lower impairment charges of-9.3 percent QoQ were the key drivers for growth in profitability.

The L&A increased by 1.9 percent QoQ, after declining for three consecutive quarters. Dubai’s mortgage market has indicated robust signs of improvement, with the number of mortgage issuances almost doubling between December 2020 and June 2021.

The asset quality of the UAE banks has stabilized overall after deteriorating in 2020. Three out of UAE’s top ten largest banks, including Emirates NBD, Mashreq and RAK Bank, have a coverage ratio of over 100 percent. The banks have shown that they are better positioned than before in managing stress in their balance sheets in view of higher capital buffers, improvement in recoveries and improving profitability. The lower provisioning by banks underlines an improved credit outlook for the sector.

The prevailing trends identified for Q2 2021 are as follows:

The table below sets out the key metrics: 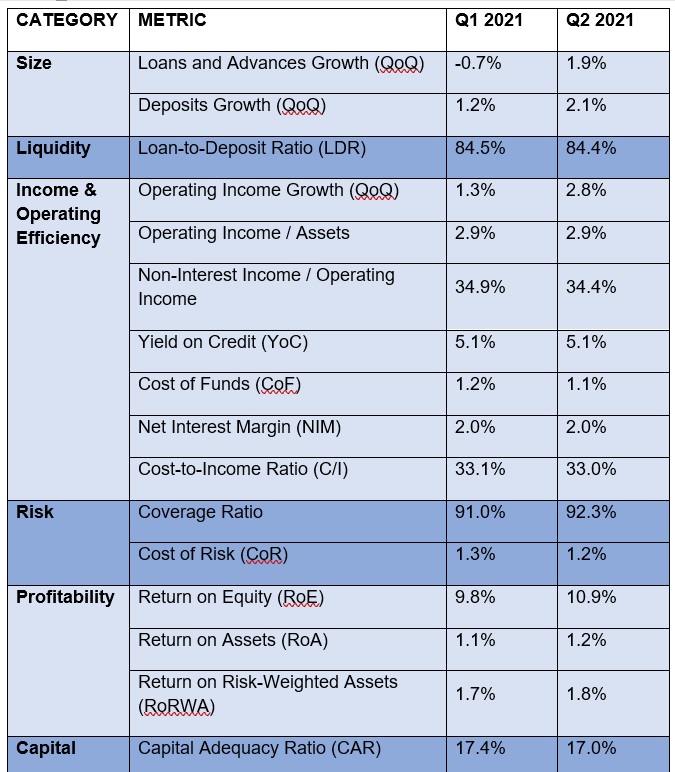 Mr. Ahmed commented: “Improvements in asset quality are helping to drive the UAE banking sector turn around. We look forward to this trend continuing. The UAE’s Central Bank’s Q2’21 credit sentiment survey notes a strong, ongoing domestic credit demand across all sectors of the economy indicating that a vibrant recovery is on track. However, the U.S. Fed’s commitment to maintaining the current low level of interest rates is expected to keep domestic banks’ income streams under pressure. We believe focusing on significant efficiency improvements, continuing to adopt technology, either organic or in partnership with fintech’s, and actively managing non-performing portfolios are critical to driving improvements forward.”

Companies, investors and government entities around the world turn to Alvarez & Marsal (A&M) for leadership, action and results. Privately held since its founding in 1983, A&M is a leading global professional services firm that provides advisory, business performance improvement and turnaround management services. When conventional approaches are not enough to create transformation and drive change, clients seek our deep expertise and ability to deliver practical solutions to their unique problems.

S.Korea says it reaches goal of 70% vaccinations for COVID-19