Demand in segment seen to continue to outweigh larger properties

Image used for illustrative purpose. Aerial view of Dubai Marina in the evening.

The affordable housing segment is experiencing the strongest demand in Dubai as properties priced below Dh1.5 million dominated transactions in the emirate's real estate market during the first nine months of 2019, latest data shows.

Low-cost properties or affordable housing units' sales registered 10.87 per cent year-on-year growth during the January-September period this year as Dubai recorded 18,858 transactions for properties worth up to Dh1.5 million, compared to 17,009 deals in the same period last year, Property Finder Group's report says.

Analysts said sales and leasing demand for affordable units will continue to outweigh larger properties in Dubai due to a growing young population, higher percentage of bachelors and small families, and greater yields offered to investors.

Experts said a correction in prices is steadily making Dubai property more affordable to investors and end-users. Dubai realty has emerged as a mature and affordable market after shedding almost 25 per cent of its value in the past five years, they added. 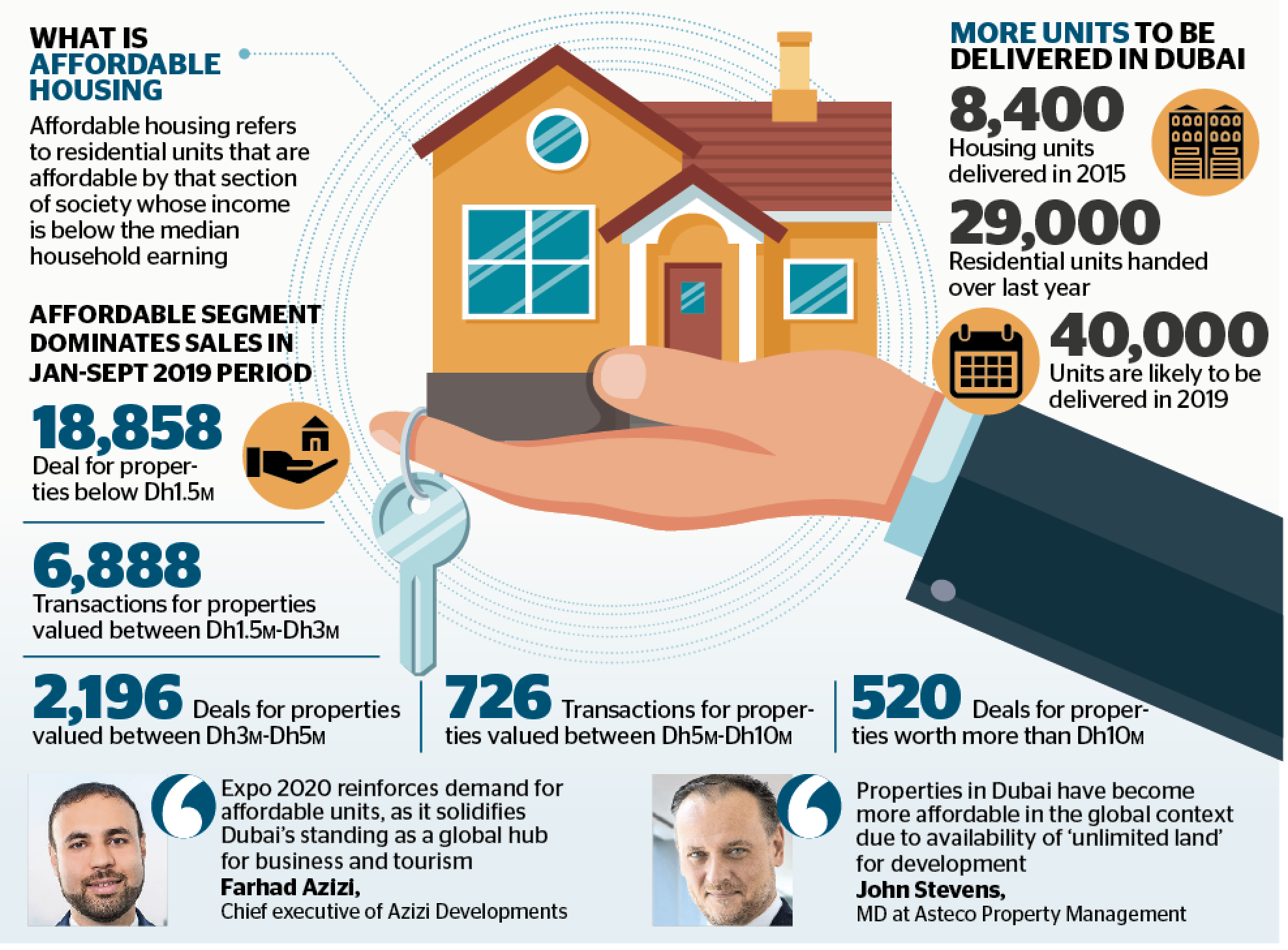 "Affordable end-user housing demand is still high and is expected to continue to be the case for many years to come," Haider Tuaima, head of real estate research at ValuStrat, told Khaleej Times. "Our research has found that current prices reached previous low levels of 2012, which in turn is prompting many households to consider and/or move to Dubai from the Northern Emirates," he said.

John Stevens, managing director at Asteco Property Management, said properties in Dubai have become more affordable in the global context due to availability of 'unlimited land' for development compared to very saturated and restricted markets of London and Hong Kong, among others.

"Affordability is not only measured in terms of the price, but also in regards to payment terms. Developers have shifted their focus to the price and flexible payment plan due to global/regional headwinds and the general squeeze in purchasing power," he said, adding that this trend is not expected to change in the short- to medium-term period.

"Expo 2020 reinforces demand for affordable units, as it solidifies Dubai's standing as a global hub for business and tourism and sets strong fundamentals for long-term growth across a multitude of industries, including real estate," Azizi told Khaleej Times. "This world-class event, and especially its after-effects, will result in an increased number of visitors, business relationships being formed and infrastructure investments being driven, propelling the vision of Dubai's visionary leadership."

"With the emirate retaining a large number of visitors and jobs being created, the event boosts demand. The affordable segment benefits from this the most, as new residents tend to prefer value-for-money units as their initial homes," he said.

Stevens of Asteco said there is enough stock coming to the market, but whether it will meet affordable the housing requirement is a different question.

Referring to the Dubai Statistics Centre's Labour Force Survey in 2014-15, he said approximately two-thirds of people earn less than Dh5,000 per month.

"This means that a large population is not eligible for a mortgage because it requires a Dh15,000 minimum salary. This segment cannot buy off-plan units also as most developers require a minimum income of Dh10,000," he said.

Stevens said that while many residents have been able to upgrade to larger and/or better units due to increased supply and declining rates, a significant number of people still live in shared units as the current 'affordable housing' is inaccessible to them.

"The number of affordable properties is expected to rise amid considering present and future supply that will intensify competition among the developers," Stevens said.

Azizi said there is ample supply in the market and developers are sure to meet investor interest - some better than others.

"Units need to be the right types and sizes, situated in prime locations, have the desired amenities and have the right connectivity and accessibility to major business, leisure and retail hubs. Those whose developments meet these criteria will thrive and see a substantial increase in sales," he said.

"Our research has shown that new-build average prices per square foot are still relatively high when compared to older ready counterparts," he said.

"There are many units set to be completed which fall within the affordable category, therefore when they become available in the market, we should expect to see sales activity in the secondary market continue to increase over the next year," said Lynnette Abad, director of data and research at Property Finder.