Qalaa Holdings, a Cairo-based company that invests in energy and infrastructure projects across Africa, is intending to follow the listing of part of its stake in the huge new Egyptian Refining Company plant later this year with a string of other company listings on the Egyptian Exchange, its chairman has told Zawya.

Ahmed Heikal, the founder and chairman of Qalaa Holdings, said: “We have eight companies in 12 strategic sectors that we are focusing on as we complete our transformation to an investment holding company.  Moving forward, we will only grow in those sectors. Our risk appetite for investments in sectors where we are not currently present is limited,” Heikal said.

He added that Qalaa Holdings also intends “to list its eight companies on the Egyptian Stock Exchange (EGX) starting Q4 2019 and (to) be done with this program in 2021”.

Heikal said that his company intends to pump over 40 billion Egyptian pounds ($2.25 billion) worth of investments into its home market over a five-year period (starting from January this year through to the end of 2022).

“This includes around 20bn pounds for the completion of ERC (Egyptian Refining Company),” Heikal told Zawya in an interview at the company’s headoffice in Cairo last week.

The Egyptian Refining Company is a $4.3 billion joint venture between state-controlled Egyptian General Petroleum Corporation (EGPC) and Arab Refining Company – a company in which Qalaa Holdings, Qatar Petroleum International and several other Egyptian and Gulf investors have a stake.

It will have the capacity to refine 4.7 million tons of diesel and other petroleum products per year, which will allow Egypt to refine more fuel within the country, reducing the amount of imports by around $3 billion a year, Heikal said. He added that this would lead to annual net savings to the Arab world’s most populous nation of around $350 million.

“Construction at ERC is almost complete and technical commissioning has begun with operations expected to gradually commence by the end of 2018, becoming fully operational towards mid-2019,” Heikal said.

“As Egypt strengthens its competitive position as a regional energy hub, we plan to make several new investments in the energy sector, starting with two projects that are complementary to the Egyptian Refining Company (ERC),” he added.

The first of these would be a $60 million upgrade that would add a further 15 percent of capacity to the plant by mid-2021, Heikal said.

“We also plan to invest in a petrochemicals project that will use output from our refinery and turn it into new value added products,” he added, stating that he expected petrochemical operations to begin in 2023.

According to Heikal, technical trials are already in progress at ERC, with more than 900 pieces of machinery and equipment having already been tested.

“Through TAQA Arabia, the company will invest around 1.5 bn pounds in 2018, a figure that is expected to increase in the following year to 2.5bn pounds and 8bn pounds by 2020. A portion of these investments will go to the Benban solar power project in Aswan. TAQA Marketing is also planning to double their number of gas stations from 51 today to 100 by 2020,” Heikal said.

“TAQA Arabia’s new 1.35bn pound solar project in Aswan will produce 50 MW of solar power generating circa $10.8m in annual revenue,” he added, pointing out that the IFC and other international finance institutions have committed to funding the project, which will begin trial operations by the end of this year, and start selling electricity in the first quarter of 2019.

He said that TAQA Arabia would connect its one millionth customer to Egypt’s natural gas grid by November 2018.

“We have been advocating for the gradual removal of subsidies in Egypt for past 10 years and in favour of the ‘fair pricing’ of goods and the devaluation of the Egyptian pound, so we do support the courageous reform program that is currently underway,” Heikal said.

“We also view water scarcity as one of our biggest national challenges in the coming years and are currently exploring investment opportunities like water desalination,” he added.

“As for other sectors, Qalaa Holdings will invest at least 500 million pounds in Egypt’s solid waste management sector in the next two years through our company Tawazon and its subsidiaries, ECARU and ENTAG. There are encouraging reforms and a national focus in this area,” he said, adding that the firm currently has two recycling plants for household waste in

“We also see very encouraging upward trends in the river transportation and logistics sectors. Through our subsidiary, Nile Logistics we will build two grain storage warehouses; one of them is already under construction at Nubaria Port in Alexandria, and the other will be completed by the end of 2020. We will also expand our investments in the transport and storage of containers and the transport and storage of coal for cement factories,” he added.

The company owns three operational ports in Alexandria, Tanash (north of Cairo) and Minya, and Heikal said that Qalaa Holdings is conducting a study over building a circular railway from Alexandria to Damietta to transport cargo.

Other investments under consideration include the expansion of three existing factories – a new line at its calcium carbonate factory in Minya, extending the GlassRock plant in Sadaat City and the potential addition of a new paper factory Shorouk Publishing – a location for which has yet to be decided.

“All our companies are growing and will be expanding, which is a reflection of our confidence and optimism in the Egyptian economy and markets if the pace and implementation of reforms continue,” Heikal said.

“I expect that Qalaa will become one of the top 10 companies in Africa five years from now. I imagine that the annual turnover of our operations will reach 80-100bn pounds,” he said.

He argued that he planned to do this without raising additional debt, stating there were “currently no plans to borrow additional funds at the Qalaa Holdings level within the next five years”.

“Our debt at the holding level stands at around $270m, which we have to pay back before 2023. Stage one of our de-leveraging plan through exits and divestments is reaching its end, and now with improved performance of our companies we are in stage two and will fund the de-leveraging through a portion of returns from our investments,” he said. 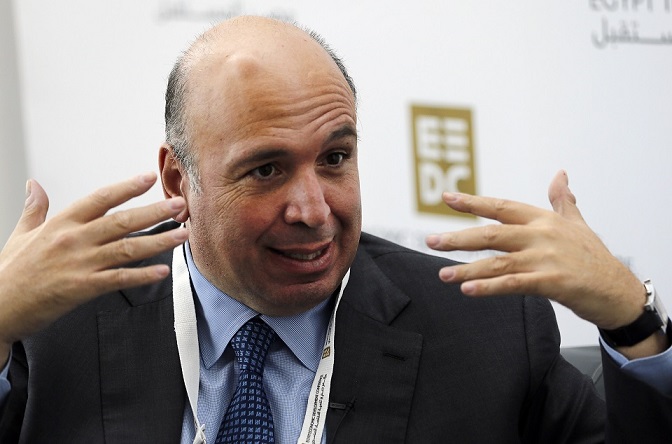 “The rest will be deployed to fund new investments in the same sectors that we are currently in,” Heikal said.

Qalaa Holdings was the top-performing stock on the Egyptian Exchange in the first six months of 2018. The company declared a loss of 118 million Egyptian pounds in the first quarter of 2018, which was a substantial reduction on the 1.3 billion pound loss incurred in the fourth quarter of 2017. Revenue also increased by 24 percent quarter-on-quarter to 3.1 billion pounds. An analyst’s note issued on the firm by Naeem Brokerage in July stated that although the company currently has heightened levels of leverage on its balance sheet, carrying total debt of 54 billion pounds (including commitments related to Egyptian Refining Company), “the commercial start of ERC should eliminate all the risks, in our opinion”. By close on Sunday, 2 September, the company’s shares were up by over 170 percent in the year to date, at 3.44 pounds per share.

Ma’aden records leap to over $319mln in Q3 profits

MNHD's board nods to capital raise