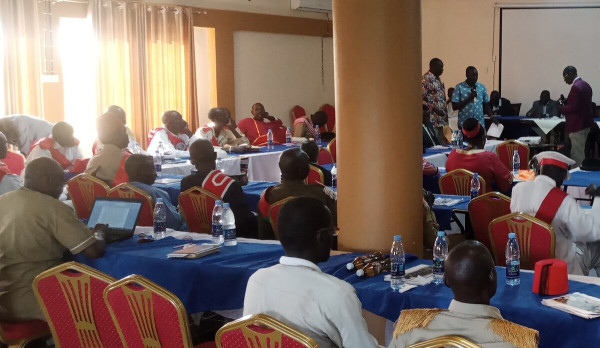 In countries, like South Sudan, where formal and informal and traditional justice systems coexist, how can the two cooperate and complement each other better, and how can the use of the local knowledge of traditional leaders be improved?

These were the questions being thoroughly pondered when the Civil Affairs Division of the United Nations Mission in South Sudan (UNMISS) gathered chiefs from the four states that together make up the country’s Bahr El Ghazal region.

“We, the chiefs of Warrap State, acknowledge the role of the ministry of local government. The role of traditional leaders has been discussed, and I hope that our inputs will be considered both at the local and the national level,” said Chief Manuor Ater representing his colleagues from his state.

The regional conference resulted in several recommendations, including a constitutional strengthening of the link between customary and statutory courts, the creation of a ministry of local government at the national level to oversee issues related to local authorities, and an improved salary structure for traditional leaders.

“We are thankful to UNMISS for this opportunity to meet chiefs from our entire region. Personally, I have learnt a lot about the kind of administrative principles that traditional authorities should adhere to,” said William Kamilo Gaki, Paramount Chief of Wau County, who believes that chiefs can do more to make citizens desist from cattle raiding and other forms of violence.

Nigeria aims to end imports of petroleum products next year

Around the UAE: Top things to do on November 30