A man carries breads on his head along a busy street near a banner for Egypt's President Abdel Fattah al-Sisi from the campaign titled “Alashan Tabneeha” (So You Can Build It) after election results in Cairo, Egypt April 3, 2018.

Egypt’s introduction of new legislation and the promotion of a series of key investment projects are part of efforts to tackle bureaucracy in the country, according to the executive director of the agency responsible for attracting inward investment into the Arab world’s most populous country.

Mona Zobaa, executive director of the General Authority for Investment and Free Zones (GAFI), told journalists on the sidelines of the Annual Investment Meeting (AIM) in Dubai earlier this month that "there's been a lot that's been done over the past period” to tackle through the red tape that has plagued many firms operating in the country.

Egypt ranks 128th out of 190 countries on the World Bank's 2018 Ease of doing Business Index and 100th out of 137 countries in the World Economic Forum's Global Competitiveness Index list, but Zobaa said she is looking to improve on these rankings.

"We monitor these reports, we have private conversation with the private sector and we burnish our reform agenda," she said.

"Over the past period, we have succeeded to furnish a new investment law that caters well for the investor. It provides electronic services, it ensures that the investor gets a good incentive package, it provides him with necessary guarantees regarding licences, approvals, incorporation. It is mandated by law, for example, that (company) incorporation takes only one day.”

She added that other, investor-friendly measures have also been taken, including a new bankruptcy law issued in January and a new movable collateral registry created last month to help banks make better lending decisions to small and medium-sized enterprises (SMEs).

She argued that the new laws being introduced, which have included an amended capital markets law passed last month, are providing more transparency for investors, and pointed to a number of positive economic indicators.

A booklet distributed by GAFI and Egypt's Ministry for Investment and International Corporation at AIM stated that net foreign direct investment (FDI) into Egypt grew by 14 percent in 2016-17 (the most recent year for which figures are available) to $7.9 billion. Zobaa said that this had recovered from just $2.2 billion in net FDI invested in 2010/11, but it remains below the $13.2 billion of net FDI attracted into the country in 2007/08 - before the onset of the global financial crisis and the periods of civil unrest that began in Egypt in 2011.

"Inflation and unemployment are coming down, economic growth rates are also improving and there are good forecasts and projections in this regard," Zobaa told Zawya. "Our picture with the outer world is getting better."

Figures from Egypt's Central Agency for Public Mobilisation and Statistics state that Egypt's unemployment rate, although still high, fell last year to 11.85 percent in 2017, down from 12.5 percent in 2016.

In December, the International Monetary Fund forecast that Egypt's gross domestic product (GDP) is likely to grow to 5.5 percent during its 2018/19 financial year, which starts on July 1, 2018 - an increase on the 4.8 percent growth projected for its current year. The IMF agreed a three-year $12 billion loan package to Egypt in November 2016 and said in December last year that about $6 billion of this had already been drawn down.

At the same time, Egypt undertook a package of reforms that included a free float of its currency and reductions in a number of subsidies, including fuel subsidies. As a result of these measures, the headline rate of inflation soared to a peak of almost 33 percent in August 2017, but has subsequently dropped sharply, reaching 13 percent in March, according to the Central Bank of Egypt’s website.

Such positive economic data has attracted the interest of the likes of Hasan Haider, a partner with Silicon Valley-based venture capital firm 500 Startups, who has described Egypt as "one of our main markets" in the Middle East.

The firm, which was the most active venture capitalist across the Middle East and North Africa (MENA) last year, funding more than 30 companies, according to Magnitt's State of MENA Funding 2017 report, completed its first deal in Egypt in 2013. However, Haider said that he expects the pace of activity in the country to pick up following the close of 500 Startups’ first dedicated Middle East fund last year.

Haider said Egypt has several advantages over neighbouring economies - its population of 90 million people means it is the biggest market in the region in population terms, and also has the biggest pool of programmers, developers and other talent from which tech start-ups can draw.

"The second thing is the mindset among the entrepreneurs in Egypt is quite good. They're hustlers - they get things done. They don't let anything stop them," Haider said.

He also said that purchasing power is not as high in Egypt as in other markets around the region.

"The costs are very cheap. If we invest $100,000 that lasts quite a while in the Egyptian market, whereas compared to somewhere like the UAE [United Arab Emirates] that would not last as long. The impact of our investment is much higher. Valuations are relatively low as well," he added.

Yet, despite this, the firm insists on setting up offshore holding companies - usually in a domain such as Delaware or the British Virgin Islands that are subject to United States or United Kingdom law - rather than holding investments directly in Egyptian companies. Haider explains that there are a number of reasons for this. One is that it tends to invest using convertible notes as opposed to direct equity, and "that's not something that's really well understood or accepted here", he said. The same goes for the use of employee share ownership programmes.

"The main things we want is an established code and legal base that supports investments in start-ups, and nowhere in the region really has that," Haider said. "It's not something unique to Egypt."

Mostafa Amin, co-founder of Cairo-based Breadfast - an online service offering fresh bread delivery to people's homes from a central kitchen - argued that the new investment law had proved to be useful for start-ups.

Amin, who had previously co-founded online news website Egyptian Streets, said that before the investment law, anyone looking to start a business would need to hire a lawyer, who would typically take between two-to-three weeks gaining the necessary approvals from various government agencies before the paperwork was ready.

Now, “the registration process is very fast,” he told Zawya in a telephone interview. “Even if you don't have a lawyer you can go and register the company with very little fees. There is a system. You can find an organised queue to speak to the guy, give him your papers and then by the end of the day, or the next day, he can have the papers of your company ready.”

Amin received investment from 500 Startups, which was also arranged through an offshore company.

“International investors will never put money into an Egyptian company, because they know that if something happens to the business, there is no protection for their money,” he said. However, he argued that the business environment in the country is improving.

"Even dealing with people from the ministry (of investment), its much, much better than before," he said.

Ziad Gadalla, a partner at law firm Helmy, Hamza and Partners (a member firm of Baker McKenzie in Egypt), said that the main advantage of the new investment law was that it set out an investment map promoting key projects where, in certain areas, investors can retain up to 50 percent of a project's cost via tax breaks from profits generated.

In an emailed response to questions from Zawya, Gadalla said that investors participating in projects considered to be of "national" or "strategic" importance could gain one master licence to cover the start-up, operations and management of the scheme, including the necessary building licences and land assets required.

Among the projects that Egypt was promoting at the Annual Investment Meeting this month were the New Administrative Capital project near Cairo, the Golden Triangle scheme looking to target the country's mineral resources and some coastal resorts, plus two projects on the northern coast - a new furniture city planned at Damietta and the Al Alamain City project.

Speaking to Zawya at the event, Malek Fawaz, an advisor to Egypt's Minister for Investment Promotion within the Ministry of Investment and International Cooperation, said that the first government ministries would relocate to the new administrative capital being built to the east of Cairo as early as next year.

The project, which was initially announced at the Egypt Economic Development Conference at Sharm El Sheikh in 2015, is a 45 square kilometre site to the east of Cairo. It was initially due to be built as a $45 billion project by a company called Capital City Partners, with investment from the UAE, but this fell through and Egypt's Housing Ministry later signed a deal with two Chinese firms to develop the master plan.

Fawaz said that infrastructure work at the city was progressing, with a road to New Cairo being built by contractor China State Construction Engineering Company nearing completion. He also said that several developers, including Egypt's Palm Hills Development and Mountain View, are working on projects for their own plots within the master development.

Jason Tuvey, an economist at London-based Capital Economics, said in a research note published just before the re-election of Egypt's president Abdel-Fattah al-Sisi was confirmed last month that the prospects for Egypt's economy look good in the short-term, with inflation and interest rates set to fall further following recent economic reforms, the weaker Egyptian pound making the country more competitive and receipts coming in from the start of production at the Zohr gas field.

Production began at the field, which is being operated by Italy's energy services firm Eni, in December, and a second unit began pumping gas last week, the company said in a press release issued on Thursday. Eni has said that the amount of gas being produced is likely to ramp up from 800 million standard cubic feet per day (scfd) currently, to about 2 billion scfd by the end of the year.

Despite the improved outlook, Tuvey said that structural reforms need to be implemented, with better, more highly-skilled jobs needed for a workforce that is set to grow at a rate of 2 percent per year for the next decade.

"There are several key areas that need to be addressed," Tuvey said. "One is raising Egypt’s low savings rate, which limits the pool of domestic resources available for investment, and has resulted in an extremely low investment rate,” Tuvey said in the note, adding that investment has remained below 20 percent of GDP for much of the past 25 years, which is one of the lowest among emerging economies (see graph below).

“Other barriers facing businesses include an inflexible labour market, restricted access to land, and concerns about rampant corruption," he added.

Tuvey also warned that authorities would “need to overcome strong vested interests” in order to push through the required reforms, and that any failure to deliver on these could lead to renewed social unrest. 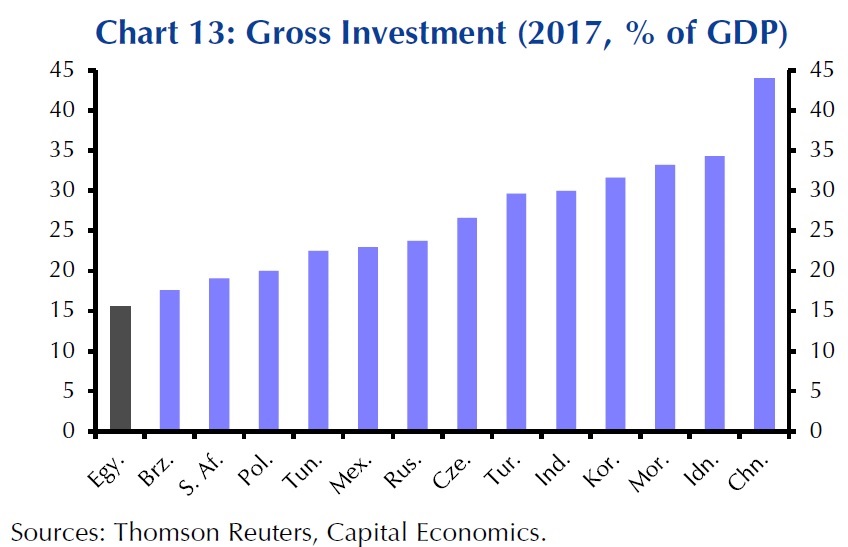 Egypt says deficit shrank to 3.6% in sixth months to December