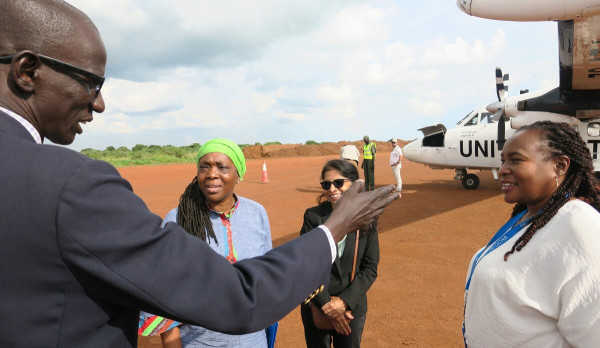 Repeated cycles of civil war have devastated communities the world’s newest nation, South Sudan, and created a humanitarian crisis that is exacerbated by climate change.

People across the country are severely impacted by some of the heaviest rainfall in nearly a century. This has led to a situation where floods have displaced tens of thousands, there is rising food insecurity while healthcare and education continue to be disrupted.

With competing crises across the globe, donor funding has reduced but community needs continue to rise exponentially here.

It is against this complex backdrop that Sara Beysolow Nyanti, the Deputy Special Representative for South Sudan as well as Resident and Humanitarian Coordinator, visited Bor in Jonglei state.

“We must work in a unified, targeted manner across the peace, development, and humanitarian nexus to make sure today’s children have a fighting chance of reaching their fullest potential. This is the only way we will bring about lasting change here,” she added.

“We had a very fruitful conversation about the humanitarian landscape in Jonglei. But first and foremost, we spoke about the need for a comprehensive peace,” revealed the DSRSG.

“It is necessary to consolidate and cement peace in the state to pave the way for humanitarian access and humanitarian actions as well as development,” she explained.

Other topics discussed: Strengthening partnerships to create conducive environment for the delivery of much needed assistance and ensuring aid workers are safe, given increasing attacks on them in past years.

Next on the UNMISS Deputy Chief’s agenda was meeting with representatives from the Bor camp for internally displaced persons (IDPs), which houses some 2,600 people.

“The situation in the camp is dire and people are hungry. Recent funding cuts to the World Food Programme (WFP) have affected us and we would like to request exceptional funding for Jonglei. We understand that money is tight, but we rely on the UN to feed our children,” stated John Both, leader of displaced people at the camp.

“We need our international friends, donors to help boost education, healthcare and protect women from gender-based violence inside the IDP camp,” added Nyabiel Gatbel, a youth representative. Another key issue raised by Ms. Gatbel: Providing dignity kits to people with disabilities, young girls, and women in the camp.

The economic situation hasn’t helped. Rising inflation has led to a corresponding increase in food prices. Households are under financial pressure and, coupled with conflict as well as extensive flooding, community members are reeling.

Seeing the impact of climate shocks first-hand was an important part of Ms. Nyanti’s agenda.

With waters from the White Nile overflowing into the city, UNMISS peacekeepers as well as humanitarian partners such as WFP and the International Organization for Migration (IOM) constructed and rehabilitated some 22 kilometres of dykes adjacent to the river. Another 22-kilometre dyke was built between Baidit and Kolmarek, while work is ongoing on shoring up a 45-kilometre stretch between Aduar in Bor county and Twic East.

But nature’s fury, in the form of floodwaters, is difficult to tackle at one go.

“However, floods have brought with it affiliated hardships—there is lack of proper sewage disposal; snakes are competing with human beings for dry spaces; clean water and food are scarce. With six counties under water, hundreds of people are displaced within the country while an equal number have fled to neighbouring countries such as Sudan, Uganda, Kenya and Ethiopia,” he discloses. “We are desperate for the UN’s support.”

To add to this, across Jonglei the security situation continues to be volatile – intercommunal conflict and cattle raids are a grim reality faced by people of this state.

But for now, what worries people the most is the imminent reduction of food aid from WFP.

DSRSG Nyanti is acutely conscious of this fact.

“No child, no adult should go hungry. I have listened carefully to what communities are telling me. Ushering in peace and prosperity isn’t a one-person job. It takes a village, as they say. I urge everybody not to lose hope. The UN family is here to support all South Sudanese to the best of our capabilities,” she said.