Will Brexit impact the UAE?

Anti-Brexit protesters demonstrate outside the Houses of Parliament, ahead of a vote on Prime Minister Theresa May's Brexit deal, in London, Britain, January 15, 2019.

While the UAE's economy may be insulated by shockwaves created by Britain's exit from the European Union, some impacts are likely to still be felt in the medium to longer term, with some sectors benefiting and others being put at a disadvantage. 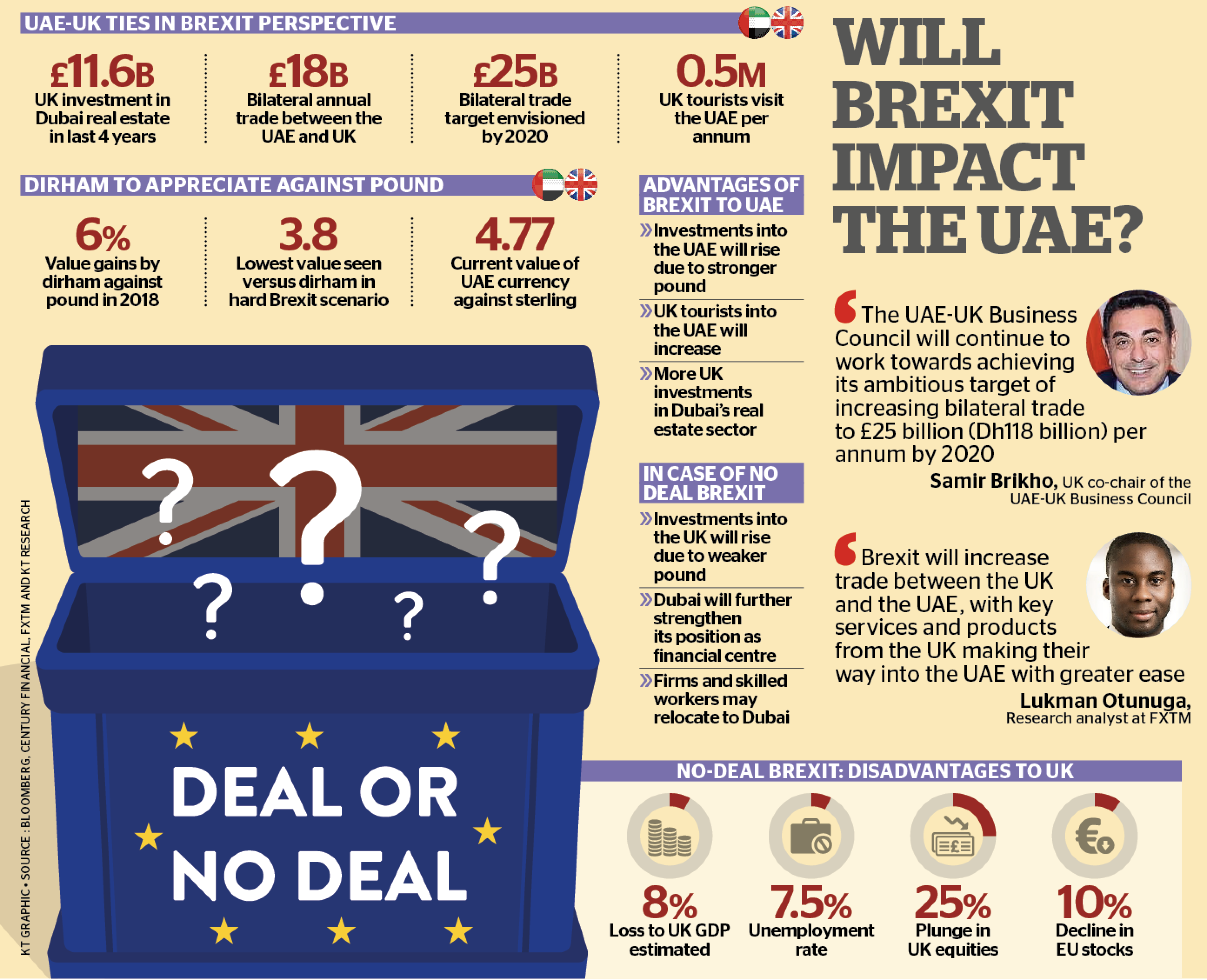 However, if a no-deal Brexit encourages risks to the global economy then the UAE, similar to other economies across the world, could feel the heat, says Lukman Otunuga, research analyst at FXTM.

On the bright side, Brexit will increase trade between the UK and the UAE, with key services and products from the UK making their way into the UAE with greater ease, Otunuga added.

On the other hand, a hard Brexit could affect the UK's investments into the UAE's real estate industry.

"Another sector seen taking a hit may be tourism due to a weak pound, not only creating a reluctance to travel but also impacting the purchasing power of British people visiting the UAE," Otunuga added.

British Prime Minister Theresa May won the no-confidence motion in parliament by a 325-to-306 majority last week. May has immediately opened talks with her opponents in an effort to break the stalemate and must return to Parliament to set out a new plan by tomorrow. Markets are hoping that these talks might result in a softer Brexit, a delay to it or even another referendum.

She must also talk to the EU again. However, the EU is refusing to reopen the Brexit deal, and the question of whether May can persuade opponents in Westminster to support a new deal also has to be questioned following the events of this week.

As a consequence, markets may be too sanguine about how things will develop from here, says an Emirates NBD research.

Anita Yadav, senior director and head of fixed income research at Emirates NBD, noted that the UK is not among the large trading partners of the UAE. Per Bloomberg data, total trade between the UAE and the UK was around $9.6 billion in 2017, which probably is concentrated in the sectors of real estate investments and tourism.

She pointed out that irrespective of the outcome of the Brexit, the impact on the UAE will be indirect in the form of currency exchange rates due to the dirham's peg to the dollar.

Samir Brikho, UK co-chair of the UAE-UK Business Council, had earlier said that the fundamentals of the UK economy and relationship with the UAE remain strong.

"The UAE-UK Business Council will continue to work towards achieving its ambitious target of increasing bilateral trade to 25 billion [Dh118 billion] per annum by 2020," he said.

A no-deal Brexit could crash the UK's GDP by 8 per cent and raise the unemployment rate to 7.5 per cent, pulling the UK economy into a depression-type scenario. MSCI's stress test analysis revealed that if no deal is agreed upon, UK and European stocks could fall by nearly 25 per cent and 10 per cent, respectively, in the "disorderly Brexit" scenario.

Vijay Valecha, chief market analyst at Century Financial, also sees a no-deal Brexit will impact tourism, as well as real estate investments into the UAE. UK investment into Dubai realty alone has topped $9 billion in the last four years and this could get hampered as a depreciating pound will reduce the purchasing power of UK citizens.

"Same will be the case with tourism; it is estimated that, on average, half-a-million UK citizens visit the UAE every year," said Valecha.

"Nevertheless, Dubai could be an indirect beneficiary as the chaos could prompt a lot of companies to relocate from London and could force a lot of skilled people to relocate to the Emirates - which ranks favourablly among major cities and could emerge as an alternative financial centre," Valecha added.

Valecha predicted that a no-deal Brexit could send the pound/dirham rate down to the 3.8 level from the current 4.77.

Although the dirham has depreciated over 1 per cent against the pound year-to-date, it gained 5.97 per cent in 2018.

Otunuga foresees the pound's performance against the dirham heavily dependent on the type of Brexit the UK moves ahead with, or even if it actually occurs.

He predicted that a no-deal Brexit will expose sterling to extreme downside shocks while a market-friendly soft Brexit outcome is seen stimulating appetite for the pound. An unlikely situation where Brexit is cancelled will be extremely positive for sterling as a massive element of uncertainty is removed.

"In regards to the technical picture, pound/dirham is pushing higher on the daily charts with resistance found at 4.7500. With the dirham pegged to a vulnerable dollar, the technical outlook for the pound/dirham points to further upside. A solid weekly close above 4.7500 is seen opening a path towards 4.8000," he added.

David A. Meier, economist at Julius Baer, maintains a bullish long-term pound outlook, based on a larger probability of a more market-friendly outcome of Brexit, such as a delay followed by a softer Brexit, or no Brexit at all.

"In the short-term, we remain bearish, as current pound exchange rates suggest that markets are too complacent about lasting political risks surrounding Brexit," says Meier.

Disclaimer: The content of this article is syndicated or provided to this website from an external third party provider. We are not responsible for, and do not control, such external websites, entities, applications or media publishers. The body of the text is provided on an “as is” and “as available” basis and has not been edited in any way. Neither we nor our affiliates guarantee the accuracy of or endorse the views or opinions expressed in this article. Read our full disclaimer policy here.
Related Topics:
brexitunited kingdomuae

Assets of UAE Islamic banks grow by 5% in 2020: Central Bank

China's May soybean imports from Brazil surge 82% vs April