Image used for illustrative purposes only. Customers pour over computer screens at an internet cafe in Dubai's Bur Juman shopping centre on March 22, 2001.

UAE – Mubasher: Being home to 192 operational startups and only 30 inactive ones that have ‘gone down the valley of death’, the UAE remains a dominating entrepreneurial activity resort as it holds the highest share of investors, number of deals, and value of deal, Arabnet said in a recent report.

The UAE is considered a host of the majority of all MENA investors that stand at 31%, while Saudi Arabia, Lebanon, and Egypt, collectively, account for 40% over the five-year period between 2013 and 2018.

It is worth noting that Arabnet Beirut 2019 witnessed the launch of the 4th edition of “State of Digital Investments in MENA 2013-2018” report, in partnership with the Mohammed Bin Rashid Establishment for SME Development (Dubai SME).

“The UAE remains steady in the percentage of investors over the same period, all while maintaining the largest portion among other markets. Where corporate investment initiatives contribute to 17% of all investors in the MENA region, the UAE holds the highest ratio of corporate investors, standing at 36%,” according to a recent statement on the report.

Across the MENA region, the UAE leads the way, in terms of featuring the highest portion of investment deals in both 2017 with 65 and 2018 with 45, in comparison to other markets, with a total of 348 deals sealed in the UAE during the five years.

“The UAE is by far the market with the highest value of investment deals in 2018, standing at $459 million – a decrease from $465 million in 2017. The UAE is a frontrunner – considerably – regarding the value of deals which amounts to six times the value of deals in the second highest market, Egypt,” the statement concluded.

As for the total dollars invested among the top five regional markets, the UAE continues to capture around three fourths or 71%.

“For the past three consecutive years, Careem, the Dubai-based ride-hailing company, has been the driving force in boosting the UAE’s value of investments whereby the startup captured 40% of all dollars invested in the UAE in 2018 alone,” the report further highlighted. 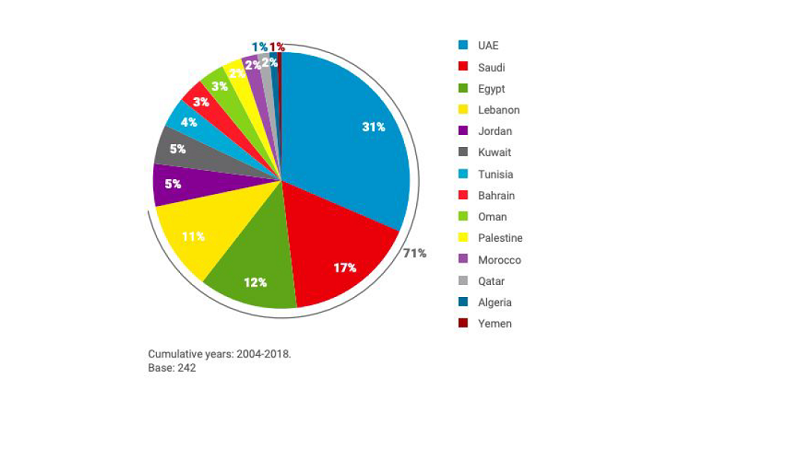 As for the role women play in the UAE, 12% of founders in the UAE are females while the remaining 271 founders are founded by men.

Meanwhile, in 2018, the UAE witnessed an interesting development of founding tech funds focused on female entrepreneurs like Mindshift Capital and Womena-Womentum.

“The entrepreneurial scene in the UAE seems to be the driving force of the country’s economy reflected by investors’ interest and investment in such a market. The UAE’s economy is forecast to achieve a 2.8% real GDP growth in 2019 with the help of the startups,” it added.

Disclaimer: The content of this article is syndicated or provided to this website from an external third party provider. We are not responsible for, and do not control, such external websites, entities, applications or media publishers. The body of the text is provided on an “as is” and “as available” basis and has not been edited in any way. Neither we nor our affiliates guarantee the accuracy of or endorse the views or opinions expressed in this article. Read our full disclaimer policy here.
Related Topics:
investmenttechnologyuae

Is there a future for cryptocurrencies in GCC states?

Most MENA countries will see moderate economic growth in 2021 - IMF