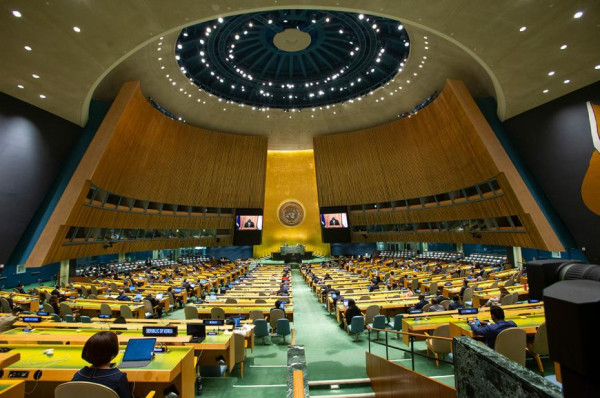 A noncompetitive United Nations election for Human Rights Council members virtually guarantees seats for candidate countries with abysmal rights records. UN member countries should refrain from voting for Cameroon, Eritrea, United Arab Emirates, and other candidates that do not meet the qualifications for membership on the UN’s top rights body.

On October 14, 2021, the UN General Assembly is scheduled to elect 18 members to the 47-country Human Rights Council for three-year terms beginning in January 2022. None of the five regional slates is competitive: all have the same number of candidates as seats available. The candidates are: Cameroon, Eritrea, Gambia, Benin, and Somalia for the African group; Qatar, UAE, Kazakhstan, India, and Malaysia for the Asian group; Argentina, Paraguay and Honduras for the Latin America and the Caribbean group; Luxembourg, Finland, and the United States for the Western group; and Lithuania and Montenegro for the Eastern Europe group.

It has been more than three years since the United States under President Donald Trump withdrew from the Human Rights Council, citing the council’s criticism of Israel’s human rights record and the participation of rights-abusing countries as members. The US is once again seeking membership on the council, after President Joe Biden promised to reverse the US rejection of the UN’s top rights body, and committed to fight racism and other abuses while making human rights a central pillar of US foreign policy. Since taking office, the Biden administration has taken some steps to address racism, but its domestic policy agenda has included maintaining abusive border policies and failing to adequately address racial disparities in police abuse, rates of incarceration, and structural racism.

Delegations in the 193-member General Assembly are not required to cast votes for all available seats. They should therefore not vote for unfit candidates. To win a seat, candidate countries need at least a simple majority of votes – 97 – in the secret-ballot election. While it has never happened, it is theoretically possible for a candidate to fail to secure sufficient votes in a non-competitive election.

The UAE’s leaders have made considerable efforts to present the country as progressive, tolerant, and rights-respecting, but its human rights situation remains dire, Human Rights Watch said. The prominent Emirati human rights defender Ahmed Mansoor is imprisoned without a mattress in near-total isolation. For years, the UAE has disregarded the Human Right Council’s mechanisms and experts, and no UN special rapporteur has been allowed to visit the country since 2014.

Cameroon, which is running for re-election, remains no more qualified for membership than three years ago. The government has suppressed the political opposition, crushed dissent, and persecuted lesbian, gay, bisexual and transgender (LGBT) people. Security forces deployed to fight separatist groups in Anglophone regions have committed systematic abuses with impunity.

Eritrea is another re-election candidate with an abysmal rights record. Eritrean troops have committed widespread atrocities in neighboring Ethiopia’s Tigray region, including massacres of Tigrayan civilians and serious abuses against Eritrean refugees. At home, government repression includes forcing secondary school students, including children under 18, into mandatory military training, and conscripting much of the adult population indefinitely. Eritrea has repeatedly refused to engage with UN rights mechanisms, including with the special rapporteur on Eritrea, in blatant disregard of council membership obligations.

UN member countries should closely review the records of all candidates for the council, Human Rights Watch said. Honduras also has a poor human rights record. The government has not taken effective action against violent organized crime, which disrupts Honduran society and pushes many people to leave the country. The lack of an independent judiciary and oversight bodies means that those responsible for abuses have widespread impunity.

The Indian government of Prime Minister Narendra Modi has adopted laws and policies that systematically discriminate against Muslims and other minorities. Indian authorities have targeted critics of the government with surveillance, politically motivated prosecutions, harassment, online trolling, and unjustified tax raids. They have shut down activist groups and rights organizations that rely on international donors.

Qatar promised to uphold the rights of migrant workers, in part by dismantling the exploitative kafala (visa sponsorship) system, ahead of FIFA World Cup 2022, but migrant workers continue to suffer abuses. And while Qatar’s constitution states that women are equal before the law, its male guardianship rules treat women as legal minors.

Kazakhstan’s government says it is pursuing a human rights agenda, yet serious restrictions on free speech, peaceful assembly, and freedom of association persist, including with respect to independent trade unions.

Malaysia should stop arresting and prosecuting those critical of the government, amend its laws to ensure protection of freedom of speech and peaceful assembly, and ratify the core international human rights treaties.

Candidates that are elected should speak out and support strong Human Rights Council action against human rights violations being committed by allies as well as adversaries. They should join in confronting serious human rights problems around the world, including war crimes in Syria and in Ethiopia, systemic repression in Egypt and North Korea, Israeli apartheid, racism in the US, and crimes against humanity in Xinjiang in China.

“UN member countries should ensure that all regional slates in future Human Rights Council elections are competitive,” Charbonneau said. “As we saw with Saudi Arabia’s failed bid for a council seat in 2020, it’s the best way to keep abusive candidates off the council.”