A topsy-turvy May for GCC markets: Markaz

Kuwait: Kuwait Financial Centre “Markaz” recently released its Monthly Markets Review report. Markaz report stated that Kuwait registered the best yearly performance of 17% followed by Saudi Arabia at 8.8%. Kuwait market was resilient to the negative sentiment that prevailed in the regional and global equity markets. Kuwait’s resilience is noteworthy in an otherwise choppy month where the pan GCC index fell by nearly 5%. The S&P GCC composite index recorded its worst monthly losses in over three years. Trade tensions between U.S.-China and regional geopolitical uncertainties resulted in investor sentiments turning sour despite the positive events in GCC’s equity markets. The global story was no different as the positive start to 2019 for the U.S. and Emerging markets came to a halt. Oil prices also witnessed a decline after registering substantial gains in previous months.

Positivity surrounding Kuwait’s chances for an MSCI EM upgrade in June’s review has helped it’s All Share index register a positive return of 2.1% in May. Boursa Kuwait also rolled out the final phase of its market development plan, which is expected to introduce several improvements to the capital markets and present a strong case for Kuwait’s MSCI EM inclusion. Zain Telecom and Boubyan Bank were the top gainers among Kuwait’s Blue Chip stocks, increasing by 13.4% and 4.6% for the month. Zain’s stock performance was an indication that investors cheered Zain’s Q1 2019 results, which was released during the month of May, where its net profit grew by 15% YoY.

The S&P GCC index lost 5.62% for the month due to regional geopolitical events and the inability of China and U.S. to reach agreement on a trade deal. Saudi Arabia and Dubai indices were the worst affected, losing 8.47% and 5.30% respectively in May. Abu Dhabi, Qatar, Oman and Bahrain also ended the month on a negative note, losing 4.84%, 1.00%, 0.29% and 0.03% respectively. Kuwait was the lone gainer among GCC markets in May. Saudi Arabia’s index, which traded at a premium to other GCC markets, fell sharply during the month due to the increasing geopolitical tensions. Saudi Arabia’s entry into the MSCI EM index partially offset the monthly losses, while its yearly gains were nearly halved by the end of the month. Regional tension spilled over to the UAE as well, with Abu Dhabi’s index erasing its yearly gains.

Markaz report stated that Mesaieed Petrochemical Holding Company (MPHC) from Qatar was the top gainer among Blue Chips, with its share price increasing by 32.7% in May. MSCI’s decision to include three Qatari companies including MPHC into their indices triggered its rise, while the rest of Qatar’s Blue Chip companies ended the month in the red. Negative trend was noticed among blue chips in Saudi Arabia and the UAE, with DP World and First Bank of Abu Dhabi losing 14.5% and 7.1% during the month. Abu Dhabi Commercial Bank (ADCB) and Union Bank officially merged during the month, with the combined entity acquiring Al Hilal Bank to create UAE’s third largest bank by total assets. ADCB lost 9.1% for the month, reducing its yearly gains to 10%.

Continuing with its capital market reforms, Boursa Kuwait launched the third and final phase of its market development project. These reforms are initiated to standardize the capital market on par with global standards and gather attention of the international investors. The success story of market development in the past is evident from Kuwait’s upgradation to the emerging markets status by FTSE Russell and S&P Dow Jones. MSCI meanwhile has also put Kuwait on its watch list for possible upgradation.

EIA has forecasted a rise in oil spot prices in its Short Term Energy Outlook. Average crude oil prices have trended upwards for four consecutive months in 2019 with risk factors like the end of waivers for US sanctions on Iranian crude exports, unrest in Venezuela and sustained production cuts from OPEC contributing to higher oil prices. The intensifying US-China trade war on the other hand has introduced demand concerns affecting market sentiments and acting as a ceiling to the oil prices. 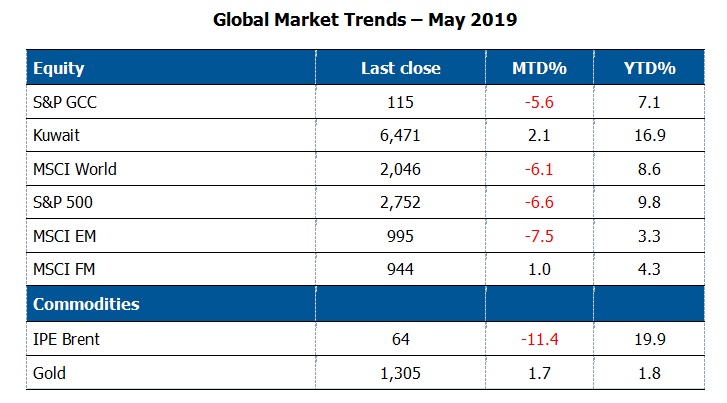 Established in 1974, Kuwait Financial Centre K.P.S.C “Markaz” is one of the leading asset management and investment banking institutions in the MENA region with total assets under management of over KD 1.16 billion as of 31 March 2019 (USD 3.83 billion). Markaz was listed on the Boursa Kuwait in 1997.

WHO expects to have access to Pfizer vaccine "very soon"