Bundles of banknotes of U.S. Dollar are pictured at a currency exchange shop in Ciudad Juarez, Mexico January 15, 2018.

The global debt load has increased by $15 trillion in the first three quarters of 2020 and now stands above $272 trillion spurred by a sharp rise in government and corporate borrowing due to the setbacks caused by COVID-19 on businesses and the economy, a recent report from Institute of International Finance (IIF) stated.

With little sign of a slowdown in debt issuance, IIF estimates that global debt will smash through records to hit $277 trillion by the end of the year. 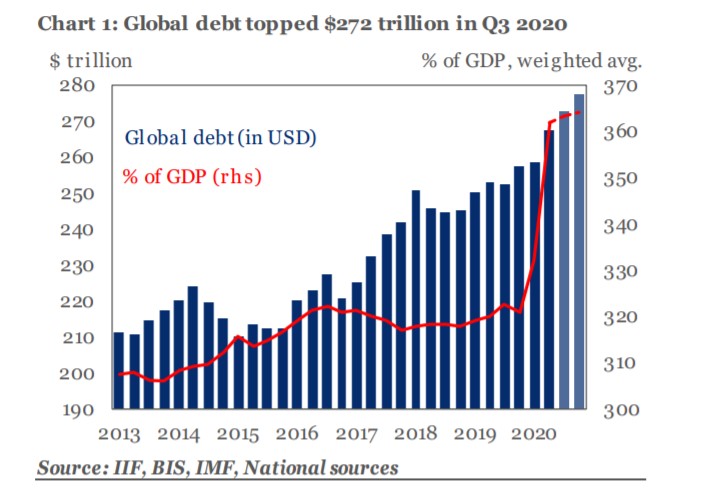 According to IIF, a US-based trade association comprising the world’s largest financial institutions, debt ratios should stabilize after a sharp surge in2020.

Debt in other mature markets rose by over $3.7 trillion to $65 trillion in the first three quarters of 2020, it said.

Debt in the Emerging Markets (EM) rose from 222 percent of GDP in Q4 2019 to over 248 percent of GDP in Q3 2020. The dollar amount of EM debt now surpasses $76 trillion, with the rise was driven by a surge in non-financial corporate debt in China, IIF said.

Excluding China, the value of EM debt declined from $31 trillion in Q4 2019 to $29.3 trillion in Q3 2020, largely reflecting losses in EM currencies against the dollar.

According to IIF, some $7 trillion of EM debt will come due through end-2021, with dollar-denominated debt representing 15 percent of the total.

The pace of global debt accumulation has been unprecedented since 2016, increasing by over $52 trillion. While some $15 trillion of this surge has been recorded in 2020 amid the COVID-19 pandemic. “As a result, there is significant uncertainty about how the global economy can deleverage in the future without significant adverse implications for economic activity. The next decade could bring a reflationary fiscal response, in sharp contrast to the austerity bias in the 2010s,” IIF said.

"If the global debt pile continues to grow at the average pace of the last 15 years, our back-of-the-envelope estimates suggest that global debt could exceed $360 trillion by 2030— over $85 trillion higher than current levels," it added.

Dubai Police wins award for being 'happiest place to work'

Mideast Stocks: Saudi at its highest in over 15-years, Qatar edges up

S.Korea says it reaches goal of 70% vaccinations for COVID-19