Dubai registered a record Dh46.6 billion in foreign direct investment (FDI) in the first half of 2019, an increase of 135 per cent year-on-year, ranking the emirate third globally both in terms of capital flows and number of greenfield projects. The emirate also surpassed its 2018 full-year FDI figure of Dh38.5 billion.

The emirate was ranked ninth globally in job creation with the high and medium technology component at the forefront of creating new opportunities with a 48 per cent share of the 24,294 new jobs created by FDI projects in the first half, the Dubai Investment Development Agency said based on the Financial Times' fDi Markets data. Data revealed that FDI projects with high and medium technology component reached 47 per cent of total FDI projects. 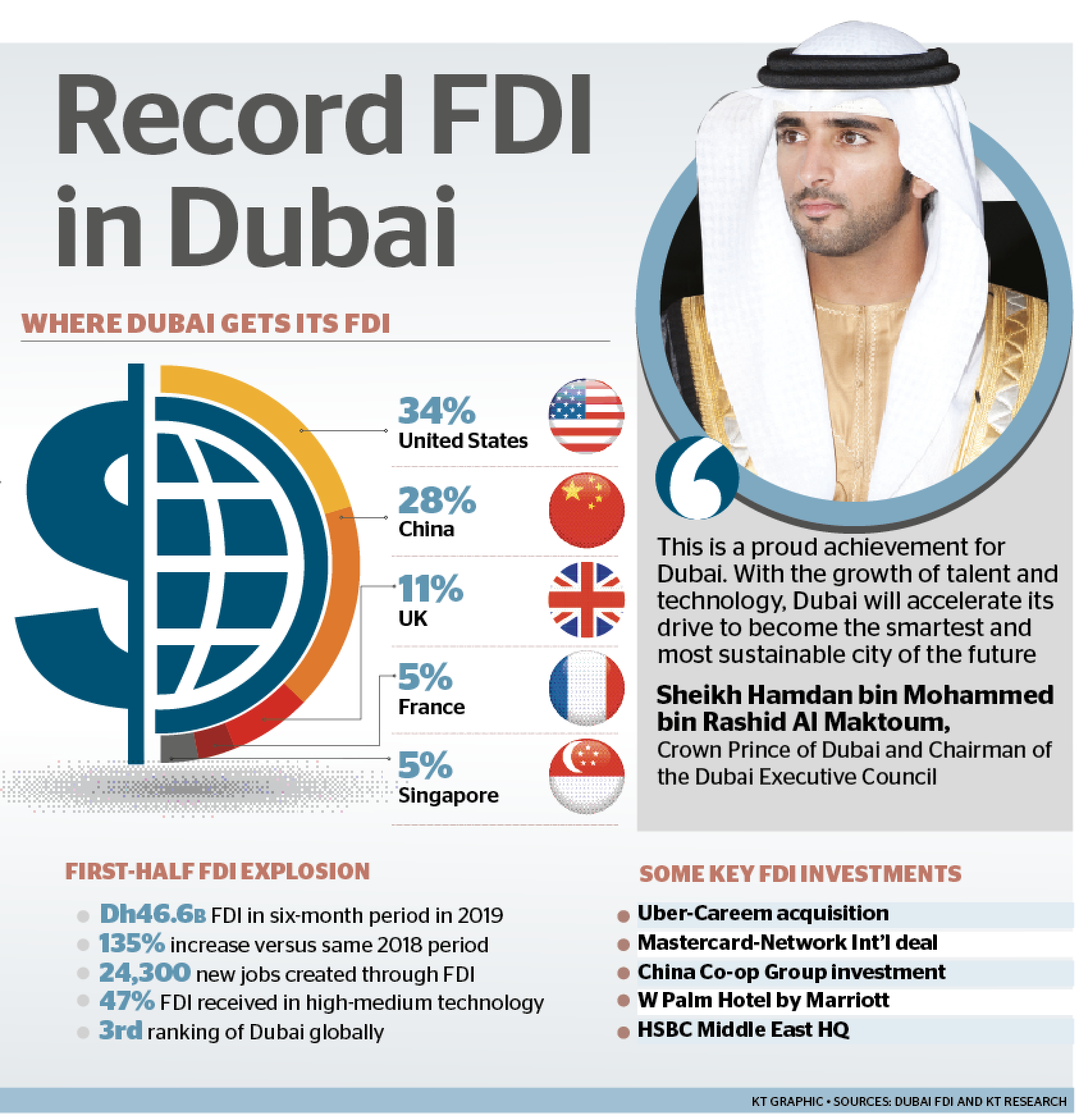 "This is a proud achievement for Dubai. With the growth of talent and technology, Dubai will accelerate its drive to become the smartest and most sustainable city of the future," Sheikh Hamdan said.

Massimo Falcioni, CEO of Etihad Credit Insurance, had said that the Emirates plays an important role in attracting FDI to the Middle East region because of its strategic geographical location, modern infrastructures that facilitate business growth and robust regulatory frameworks that promote and safeguard international investments.

"The UAE, which is the largest source of FDI in the Arab region, is further strengthening its local businesses to expand their footprint globally as part of the UAE's non-oil diversification strategy," Falcioni said.

Sami Al Qamzi, director-general of Dubai Economy, stated the emirate has maintained a leading position among top global cities in FDI attraction over the past five years.

"The FDI results of the first half of 2019 is a testament to the Dubai economy's competitiveness and resilience in the face of global shifts and challenges that have adversely affected the flows of FDI globally in recent years," he added.

"Dubai is classified as a major city in international rankings for top FDI locations, ranking third in overall rankings and second in economic potential in the latest Global Cities of the Future 2018-2019, according to a report by the Financial Times' fDi Benchmark study.

Fahad Al Gergawi, CEO of Dubai FDI, said the record FDI results achieved by Dubai in the first half of 2019 are in line with expectations, which has led to remarkable 2018 results, the highest in 10 years.

In an interview with Bloomberg TV, Al Gergawi had said in August that the emirate would surpass its last year's FDI of Dh38.5 billion.

Some of the major deals recorded in the first half include Uber's acquisition of Careem and Mastercard International's investment in Network International. The emirate saw capital flows worth Dh13 billion during the year.

Disclaimer: The content of this article is syndicated or provided to this website from an external third party provider. We are not responsible for, and do not control, such external websites, entities, applications or media publishers. The body of the text is provided on an “as is” and “as available” basis and has not been edited in any way. Neither we nor our affiliates guarantee the accuracy of or endorse the views or opinions expressed in this article. Read our full disclaimer policy here.
Related Topics:
investmentbelt and road initiativeeconomyuae

Israeli-owned ship in Dubai for assessment after explosion