UAE banking outlook: Big four may struggle to match double-digit gains made in 2018

The UAE dirham’s dollar peg means that UAE benchmark interest rates must match those of the United States’ Federal Reserve, which raised rates by 100 basis points last year and is expected to hike rates by a further 50 basis points in 2019. Typically, that should mean more profits for banks, which historically have tended to adjust their lending rates faster than the rates they pay to savers.

“For UAE banks, the impact from higher interest rates won’t be the same as in other Gulf markets – Saudi banks benefit by a larger magnitude, because strong competition in the UAE makes banks less able to pass on higher rates,” said Monsef Morsy, co-head of research at Cairo’s CI Capital.

“That’s why higher rates haven’t translated into higher margins. For 2019, the outlook is for more-or-less flat margins, even if there are further interest rate increases.”

First Abu Dhabi Bank’s (FAB) NIM fell to 2.35 percent in 2018 from 2.48 percent a year earlier, while its net interest income slipped to 13.03 billion UAE dirhams ($3.5 billion), from 13.11 billion dirhams in 2017 despite expanding its loan book by 7 percent “as strong business volumes and rate hike benefits were offset by competitive pricing, risk optimisation in personal banking, and tactical deployment of excess short-term liquidity”, according to a company statement. 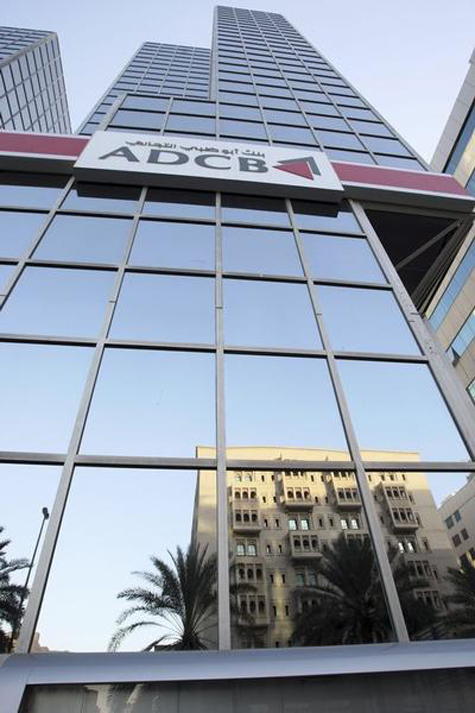 ADCB has agreed a three-way merger with Union National Bank and Al Hilal Bank which, when complete, will create a bank with assets of $114 billion.

First Abu Dhabi, whose annual net profit rose 10 percent in 2018 to 12 billion dirhams, is in a unique position as the Abu Dhabi government’s banker. This requires the bank to sometimes absorb excess liquidity that it cannot then lend out because this money must be immediately accessible for the government.

“While those deposits do not earn FAB any interest income, FAB still has to bear the cost of those funds, hence the pressure on its NIMs,” said Maria Elena Ponceca, a banking analyst at Al Ramz Capital in Dubai.

He also acknowledged greater uncertainty over the extent of future Federal Reserve rate hikes and predicted banks’ net interest margins would be flat this year.

“Any positive impact from Expo-related projects could be a short-term catalyst, but so far we’ve seen little of that,” Morsy added.

Higher interest rates will likely dampen demand for borrowing, while NIMs could contract for some banks, said Morsy.

“Banks with access to international markets might fare better because they can obtain cheaper funding and so can contain any impact on margins,” he said.

Lower provisions were a key reason for banks’ strong profit growth in 2018, but FAB’s Burdett warned provisioning will rise this year due to growing loan defaults in property and credit card lending.

His colleague, Arif Shaikh, FAB’s chief risk officer, told the same analysts’ call that there was also “stress” in the retail and hospitality industries.

“It’s too early in the year now to see how this is going to translate into an NPL (non-performing loan) formation,” said Shaikh. “Probably after the first quarter, we’ll be in a better position to judge in terms of how the book is actually going to perform. The consumer space … we still see some amount of stress happening there.”

Emirates NBD’s non-performing loan (NPL) ratio was 5.9 percent in 2018, down from 6.2 percent a year earlier. However, its fourth-quarter NPL ratio increased by 10 basis points versus the preceding three months.

“It’s no secret that the rates are dropping across all asset classes of property whether it be a residential, commercial, retail. That affects the cash flows of our clients where we’ve with funded them for real estate,” said Nelson.

“So, we’re doing a lot of proactive work with our clients … looking at the loans early and getting in front of the problem to restructure them if we have to, so that we don't have that problem.”

Having expanded its loan book by 8 percent in 2018, Emirates NBD – Dubai’s largest bank by assets - forecasts loan growth in 2019 will again be in the “mid-single digits”. Its 2018 annual profit was 10.04 billion dirhams, up 20 percent year-on-year.

Subramanian said he was concerned about the property sector. “Not so much the developers but investors who have bought their property and leverage them because you’ve got a double whammy of higher vacancies, lower rentals and higher interest rates,” he said.

NPLs at ADCB, which is in the process of merging with domestic rivals Al Hilal Bank and Union National Bank, increased to 2.88 percent in 2018 from 2.12 percent a year earlier.

“At the same time, recoveries are being exhausted, so the net effect would potentially be higher charges.”

The implementation of tougher accounting standards – IFRS9 – from January 2018 has made banks more conservative in their provisioning, so lenders are well prepared for an increase in loan defaults.

“The trend in terms of cost of provisioning is definitely up, but it shouldn’t be that significant,” said CI Capital’s Morsy.

Rise of the machines

Aside from FAB, which will spend 900 million dirhams on the merger of First Gulf Bank and National Bank of Abu Dhabi, UAE banks have been cutting costs. Yet further spending reductions will be tricky as lenders invest in expanding their fintech capabilities to woo new, tech-savvy customers and deliver services more efficiently.

Emirates NBD will spend $300 million on its digital platforms including its Liv. banking app over 3-4 years, Subramanian revealed. Adult consumers can open a Liv. account with just a UAE mobile number, a smartphone and an Emirates ID. It is recruiting around 10,000 customers per month.

“The key importance of Liv. is not just as good for attracting a client base that we probably historically would not have attracted. But it’s also an experimentation base for new technologies,” said Subramanian.

“Being millennials the ticket sizes for each customer is lower than a customer acquisition in the main bank. This year, you can look forward to us adding a wider product range to Liv., which is currently just the deposit, debit card and some bill payment mechanisms.”

A 2018 report by KPMG warns that for all technology’s potential to transform banking, UAE lenders and non-bank financial institutions are still trying to see how they can offer long-standing services such as current and savings accounts, credit cards and loans more cost-effectively, rather than imagining “ how today’s – and tomorrow’s – bank actually needs to look and feel like.”

The report speculates that just like Uber and Airbnb have become market leaders in their industries as pure-play technology companies, the same could happen in financial services.

“Digitalisation is the future of banks,” added CI Capital’s Morsy. “It should improve profitability and volume growth. Banks have begun investing significantly in these platforms. The direction is in an improvement in efficiency and top-line growth for those banks with strong digital platforms.”