The CIS region is home to large, young and economically active Muslim populations, and other segments of the Islamic economy, from food to fashion, are relatively well established.

Prospects are good for Islamic finance in Kazakhstan, Kyrgyzstan, Tajikistan and Uzbekistan thanks to government support, large Muslim populations as well as China’s Belt and Road Initiatives (BRI) in the region.

According to a recent report by Moody’s Investor Service, what differentiates them from other CIS countries the most is the level of government commitment to developing the sector and the advances made in establishing legal and regulatory infrastructure.

“Kazakhstan, Kyrgyzstan, Tajikistan and Uzbekistan are set to lead this expansion of Islamic banking,” said Svetlana Pavlova, Assistant Vice President-Analyst at Moody’s. “These countries have large Muslim populations and are notable for their governments’ commitment and progress in establishing better legal and regulatory infrastructure for Islamic finance.”

The CIS region is home to large, young and economically active Muslim populations, and other segments of the Islamic economy, from food to fashion, are relatively well established.

Moody's estimate that Muslims account for about one third of the total population in the CIS region, “With this demographic and cultural foundation, demand for Islamic finance will grow over time,” the report said. 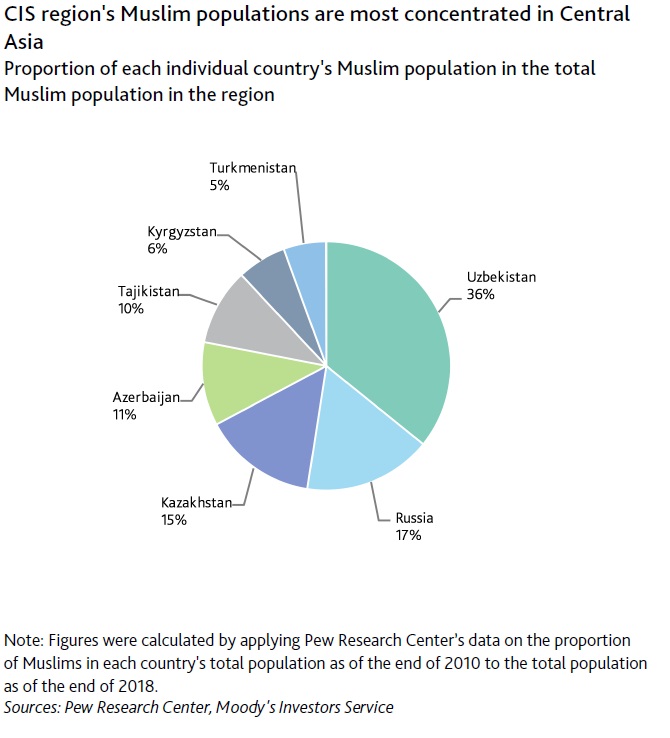 The impact of China's Belt and Road initiative is considered of utmost importance.

Majority of CIS countries' participate in China's Belt and Road Initiative, and this is expected to provide an impetus for the development of Islamic finance for infrastructure projects.

Refinitiv's BRI Connect Report has listed the Uzbekistan-Tajikistan-China international highway and the Trans-Caspian International Transport Route - a 6,500 km corridor linking Asia with Europe and passes through countries including Azerbaijan, Georgia, Kazakhstan, and Turkey - as economic corridors that could create plenty of economic opportunities for the countries participating in BRI.

The Angren–Pap electrified railway line that connects Tashkent with eastern Uzbekistan is a huge BRI project from the region.

However, the most high-profile BRI project in Kazakhstan, a light railway system worth $1.9 billion, has hit a wall. The project was supposed to start operating by 2020, but was dragged into limbo when China Development Bank halted lending last year after the collapse of the bank where funds it had provided were deposited.

Islamic Development Bank (IDB) funding, Moody's said, can be a catalyst to the development of domestic Islamic finance industry because domestic banks are often involved as intermediaries or agents distributing the funds to end customers.

Funding from IDB is small relative to recipient countries' GDP but it is substantial compared to the current size of the Islamic banking sector, the report said.

In 2016, IDB launched a special funding program to provide a total of up to $6 billion to six countries in Central Asia over five years to 2020. IDB to date has provided more than $7 billion to those countries, of which more than half has gone to Kazakhstan and Uzbekistan.

According to Moody's, the regulatory disadvantages, along with weak public awareness, are the biggest obstacles to the growth of Islamic banking.

Among regulatory hurdles, in most CIS jurisdictions, asset purchases and resales, which are part of many standard Islamic finance transactions, are subject to value-added taxes, unless authorities grant an exemption.

In some countries, Islamic banks’ deposits are not covered by state deposit insurance systems. Further, Islamic banks cannot use central banks’ conventional liquidity and funding facilities because they all bear interest.  These disadvantages mean Islamic banks have higher funding and operating costs compared with mainstream lenders, the report said.

To reopen or not to reopen: That is the fraught question for U.S. schools

Looking for a job in the UAE? These sectors will be hiring in 2021

Deep losses for Middle East carriers to continue in 2021: IATA

Dollar in holding pattern but traders warn of further declines