The value of mergers and acquisitions (M&A) announced in the Middle East and North Africa in 2018 increased by 50 percent to $54.9 billion from $36.6billion in 2017, according to a new Deals Intelligence report by Refinitiv.

The 2018 Middle East and North Africa Investment Banking Analysis report states that deals involving a MENA-based company as a target were up 63 percent year-on-year to $31.4 billion - the highest level in 11 years. The was driven both by inter-regional deals, which were up 79 percent year-on-year at $16.7 billion, and by inbound M&A - up 48 percent to $14.7 billion. Outbound M&A also increased by 37 percent to $16.5 billion.

Two of the three biggest deals to be announced in 2018 involved bank mergers. The largest was Saudi British Bank's $5 billion merger with Alawwal Bank, and the third-largest was Dubai-based Emirates NBD's $3.2 billion acquisition of Turkey's Denizbank. Splitting these was Abu Dhabi state investment firm Mubadala's $3.7 billion sale of its stake in DH Publishing - the parent company of the EMI Music Publishing - to Japan's Sony Corporation.

In terms of capital markets, the report said that equity-related issuance increased by 42 percent year-on-year to $9.4 billion. However, many of the biggest trades were follow-on issuances. The IPO market brought in just $2.1 billion in MENA last year - a 52 percent year-on-year decline - and $758.7 million of this came from Qatar Aluminium Manufacturing's flotation in October, which was only open to Qatari nationals.

Debt capital markets remained robust, and although higher oil prices meant total issuance fell 18.2 percent to $84.8 billion last year, this was still the second-highest year on record. In total, the amount of investment banking fees earned in the region increased by 4 percent year-on-year to $1.1 billion, the report said.

In a telephone interview with Zawya on Wednesday, Walid Chamma, a senior associate of the U.S. investment bank Houlihan Lokey, said that he expects M&A activity to remain buoyant in 2019.

"From a regional perspective, there's going to be further M&A… mainly driven by the fact that there has to be industry consolidation, especially in the banking and insurance industries.”

In insurance, for instance, the United Arab Emirates alone has 59 conventional and Islamic (takaful) insurance firms, according to a 2018 report from consultancy Miliman.

“They are all small, so they are going to need to build scale to compete," Chamma said. "If you think about the UAE market particularly, given the population size, they are overbanked and over-insured."

Chamma also believes consolidation is likely in the real estate and construction markets, particularly as many contractors have struggled with cash flow issues. 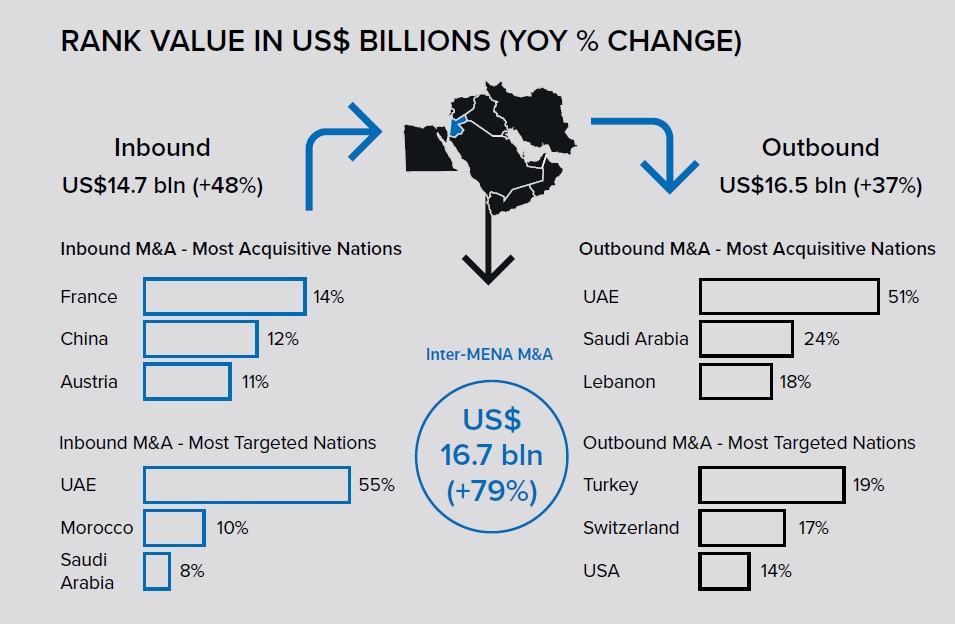 "Contractors are getting squeezed by developers in terms of pricing and at the same time, their working capital cycle is taking much longer. Even if it is a government entity being the ultimate client, what used to be 90 days (payment) is now probably taking 180 days. So either companies are going to start going bankrupt, or there should be some consolidation," he said.

He also argued that the major UAE developers such as Damac Properties, Emaar Properties and Aldar Properties, will need to target overseas expansion to grow. "You might see acquisitions across borders to try and make sure that they can execute on that," Chamma said.

However, he predicted another fairly quiet year for the IPO market, citing "very, very low" levels of liquidity on many local stock exchanges. Data from Bahrain-based investment bank SICO shows that average daily turnover on the Dubai Financial Market dropped to $41 million in December 2018, down 53 percent year-on-year from $89 million in December 2017.

"There are good companies ready to IPO, but you need the market to improve," he said.

In an emailed response to questions on the outlook for the region's IPO market earlier this month, Vijay Valecha, chief market analyst at Dubai-based Century Financial Brokers, said that the “global economic slowdown and fluctuating oil prices make this a tough year” for launching IPOs in the region.

Refinitiv is the former Financial & Risk business of Thomson Reuters, and the parent company of Zawya.com.