Huge potential for Islamic banking in Egypt; lack of political will stymies growth

shutterstock
By Matt Smith, Salaam Gateway
Egypt’s Islamic bank profits are up, structural reforms are accelerating an economic rebound and banking penetration among ordinary Egyptians remains low, all of which suggest Shariah-compliant financial services can make major gains in 2018.

Yet government antipathy towards Islamic banking and a lack of specific regulations to govern the sector could stymie growth.

Of the 40 banks operating in Egypt, three are fully-fledged Islamic banks, with about a dozen conventional banks operating Islamic windows. Islamic bank assets reached 226 billion Egyptian pounds in 2017, around $12.8 billion, up 10.24 percent in the previous year, according to the Egyptian Islamic Finance Association (EIFA).

Islamic banking makes up 6 percent of Egypt’s overall banking sector, EIFA chairman Dr. Mohamed El Beltagy told Salaam Gateway. This is a low market share for a country in which the world’s first bank that put the principles of Islamic banking in practice opened in the 1960s. Shariah-compliant financial services has failed to gain widespread acceptance in the decades since, especially suffering long-term damage after millions of Egyptians lost money on Ponzi schemes in the 1980s that were sold as Islamic investments.

State hostility is another, perhaps bigger factor, with the government of former president Hosni Mubarak, who ruled Egypt from 1981 to 2011, fearing Islamic banking could empower Islamist organizations.

The year-long presidency of Mohamed Mursi in 2012-2013 sought to introduce reforms to bolster the sector, but Mursi’s overthrow and the reinstatement of army-influenced rule again led to the marginalization of Islamic banking.

Mursi’s Freedom and Justice Party in June 2012 proposed regulatory changes that aimed to expand Islamic banks’ market share to 35 percent within five years, from 5 percent at that time, Reuters reported. These would have included inserting a dedicated section on Islamic banking into the existing banking law and the formation of an independent Shariah authority to oversee Islamic banking activities.

Those proposed reforms, for now, seem to have been put on ice, although Ahmad Gad, an asset manager at Faisal Islamic Bank of Egypt, told Salaam Gateway the central bank is considering creating a department devoted to Islamic banking. The central bank did not respond to requests for comment.

At present, there are no specific regulations for Shariah-compliant financial services, with defaults on Islamic facilities handled the same as those on conventional banking products.

“The biggest challenge for 2018 is that we still don’t have separate laws to govern Islamic banks,” said EIFA’s El Beltagy.

Still, EIFA forecasts a 10 percent growth in deposits this year, with assets likely to grow at a similar rate. The forecasted deposits growth is higher than the 8.47 percent in 2017 when they rose to 192 billion pounds, according to official EIFA figures.

“You can see in Dubai there’s the vision and the political will to create an Islamic finance sector. We don’t have that in Egypt,” said Emad El Sahhar, who from 2010 to 2015 was general manager for Islamic banking at Egypt’s state-owned Banque Misr, where he restructured its Shariah-compliant business and three-dozen Islamic branches.

“If you don't have a crystal-clear vision, you will get lost, whether you are using Shariah-compliant or conventional modes of finance. Egypt’s decision makers don’t have a vision of how to develop the Islamic finance sector.”

Banking penetration in Egypt is among the lowest in the Middle East and North Africa, with less than 15 percent of working-age Egyptians holding bank accounts, while around 90 percent of its almost 95 million resident population are Muslim, which should suggest big potential for Islamic banks to woo new customers.

But such is the poverty in Egypt – 28 percent of people live on less than $330 a year – banks seem to think it is little worth their while appealing to unbanked Egyptians.

“Islamic banks must come up with adequate products to meet the needs of potential customers, not just expect customers to come to them because they’re Islamic.” 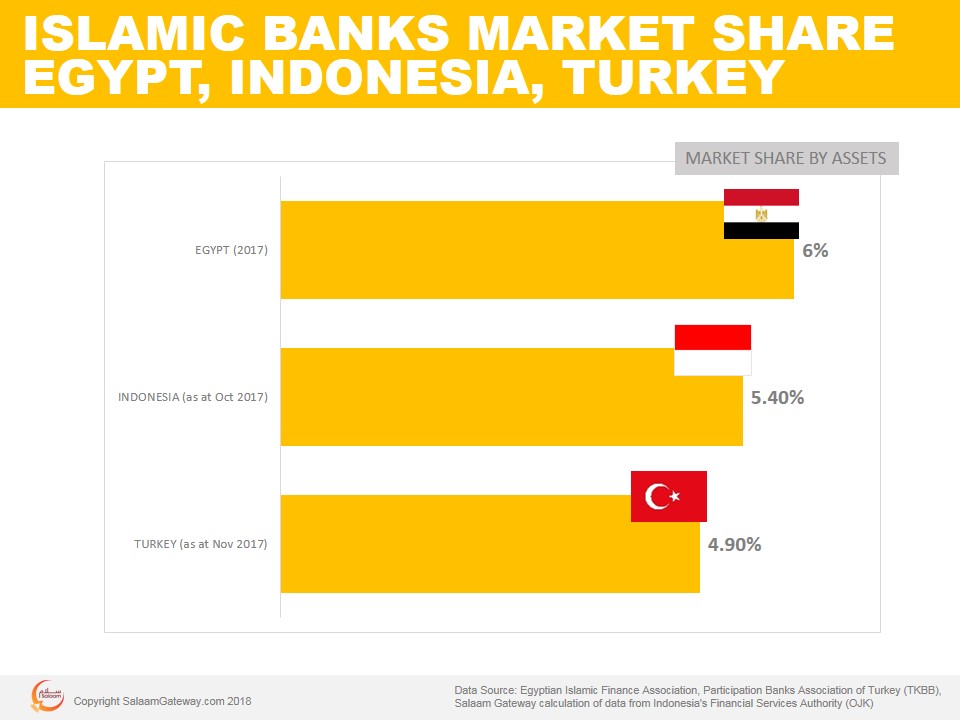 Both S&P Global Ratings and Moody’s offer a bullish outlook for Egypt’s economy and its banking sector, citing a $12 billion, three-year funding package from the International Monetary Fund and the flotation of the Egyptian pound in November, which eased a foreign currency shortage. Rating agencies also point to the likelihood of further reforms to support business growth, increasing foreign direct investment, higher exports and the beginnings of a recovery in the tourism sector.

Egypt’s Islamic banks are enjoying the benefits of this turnaround following the political and economic crises of earlier this decade. Al Baraka Bank of Egypt, majority-owned by Bahrain’s Al Baraka Banking Group, made a profit of 534.7 million pounds in the first nine months of 2017, up 38 percent year-on-year.

ADIB Egypt, majority owned by Abu Dhabi Islamic Bank and formerly National Bank for Development, made a profit of 500.7 million pounds in the first nine months of 2017, nearly double the profit of a year earlier, while market leader Faisal Islamic Bank of Egypt posted a 10 percent increase in nine-month profit to 1.25 billion pounds.

She warns her forecasts are based on the Egyptian pound steadily appreciating – it fell by around half versus the dollar following flotation – so a weakening of the currency or slower economic growth would hurt banks, both conventional and Islamic.

For Islamic finance to succeed, it must demonstrate a real economic added value, said S&P’s Damak.

Egypt’s central bank has taken tentative steps, in April-May 2017 promoting a Financial Inclusion Week in which ADIB Egypt offered Egyptians the chance to open accounts free of charge and with no minimum balance requirement, for example.

Following the global financial crisis, Egypt’s Islamic banks were seen as safer than their conventional counterparts and succeeded in expanding their asset base despite government insouciance. The total assets of the three fully-fledged Islamic banks grew from 30.9 billion pounds in 2007 to 69.7 billion pounds in 2012, Salaam Gateway calculated based on IFC dollar-denominated estimates. As of 2016-end, this trio had combined assets worth 150.8 billion pounds, their respective annual results show. 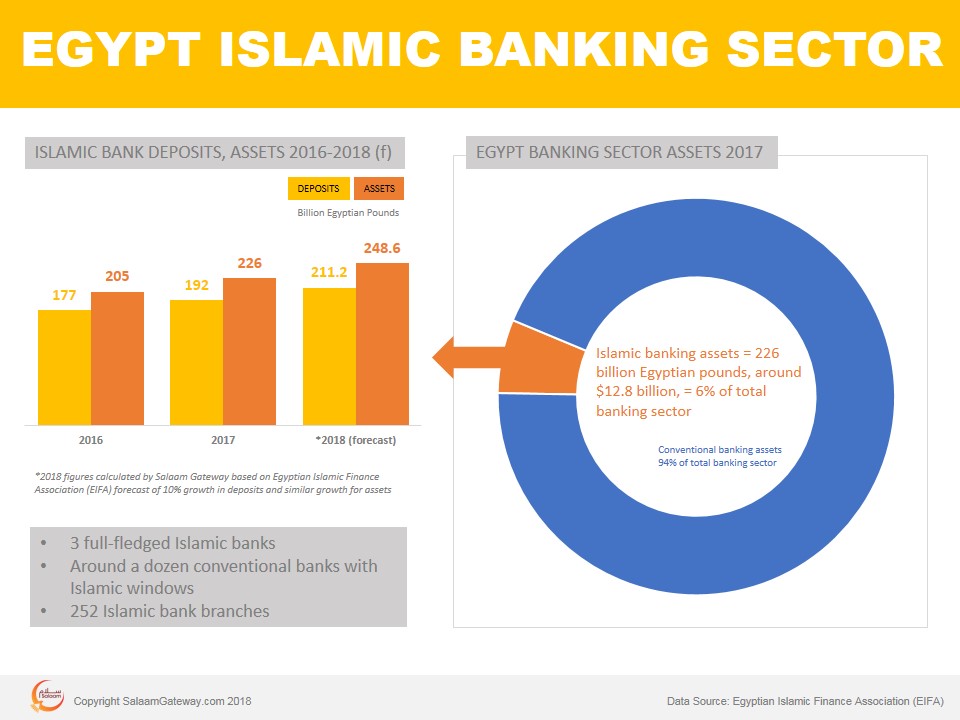 The World Bank’s International Finance Corporation (IFC) believes providing finance for Egypt’s small and medium-sized enterprises (SMEs) represents a bigger opportunity for Islamic banks; as of 2013, Egypt’s SME sector accounted for a quarter of the country’s GDP and three-quarters of private sector employment, yet a fifth of SMEs opt against obtaining any kind of financing due to the lack of availability of Shariah-compliant products.

“Conventional banks are not fully meeting the demand for banking services by Egyptian SMEs, which certainly restricts the ability of small business to grow and become more productive. Several SMEs still rely on the informal sector for their financing needs,” said Kaiser Naseem, IFC Head of Islamic Banking and Digital Finance Advisory Services for MENA and Central Asia.

“There’s strong growth potential particularly on the deposit side and also in loans. Banks are increasing lending to SMEs. However, there are several risks given the lack of transparency from SMEs, lack of financial statements. There are also limitations in terms of the framework for banks to recover bad debts, which is another weakness limiting banks’ recovery prospects.”

The Egyptian Islamic Finance Association chairman El Beltagy also sees the need for product diversification to serve businesses. “We need new products for customers, more means to finance customers, like credit cards, for example. More companies will like to obtain finance that is Islamic,” said Beltagy.

The sector’s opportunities are also limited by the absence of sovereign sukuk. Government borrowing, through securities and loans, account for 40 percent of Egyptian banks’ total assets, although these are off-limits to Islamic banks. Egypt approved a sukuk law in 2013, but this was not implemented due to widespread criticisms, and the government last year began looking at revising it.

Yet for El Sahhar, the former Islamic banking chief at Banque Misr, expanding Egypt’s Islamic finance sector should not be seen as a goal in itself, “but a tool in a sustainable banking system that can help reduce poverty and unemployment by mitigating risk equally.”