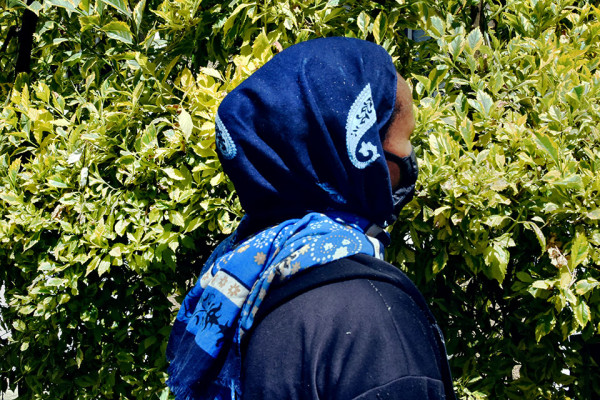 “The soldiers were shooting us from behind as we ran away in the forest. Some girls were raped and beaten. When we got caught [in a neighbouring country], the police made us sleep next to a toilet. We had to beg them for food,” shares Alem Kifle* about her migration journey. “When you are an illegal immigrant, you are considered less than dogs.”

As the COVID-19 pandemic swept through Ethiopia, the country’s already high unemployment rate increased and travel restrictions obstructed safe migration pathways for thousands of Ethiopians. In a desperate attempt to provide for her children, Kifle, like many others, turned to people smugglers who promised jobs. But her journey ended with three months of imprisonment in a foreign country before she was deported back home.

“When I came back to Ethiopia, I had no money, and I was depressed. My son was living on the street and my daughter was living with a neighbour. In a situation like this, your own family can turn their back on you,” she says.

An estimated 550,000 migrants were expected to return from Gulf countries to Ethiopia in 2020, because of the pandemic, many carrying the trauma of violence they experienced during migration. Despite the spike in demand, shelters were unable to accommodate returnees because they didn’t have enough isolation spaces or personal protective equipment (PPE) to prevent transmission of the coronavirus and lacked skilled personnel.

Kifle was referred to one of these specialized women’s shelters, run by the Good Samaritan Association (GSA) in December 2020. The GSA shelter provides safe accommodation, medical care, psychological counselling, and vocational training for trafficked, deported and returnee women survivors of violence. After completing vocational training that provides them with business skills as well as leadership and life skills, women receive small grants to start their own businesses.

“The fact that I was able to access these services gave me hope and courage,” says Kifle. At the GSA shelter she received immediate medical treatment and counselling. She was also trained in food preparation. With the startup capital she received from GSA, Kifle is now running a small tea and coffee shop in her hometown and raising her two children.

“Our role is to make women believe that they can work, and their lives can change,” says Hirut Yebabe, Executive Director at GSA. “We provide care services to survivors of violence, showing them love and compassion. It is always such a joy to witness survivors grow and become role models for other women.”

Between August and December 2020, the GSA shelters in Ethiopia’s capital, Addis Ababa, and northern city, Gondar, supported the rehabilitation of 55 trafficked, deported and returnee women and girls who experienced violence. All of them are now back in their communities, rebuilding their lives and earning decent incomes.

Migrant women and girls can experience violence at all stages of migration – while travelling or in transit, on arrival in the country of destination, and upon return to their home country. While survivors require a range of services, a UN Women study conducted in 2016 found that the majority of survivors rated counseling as the most valuable service they received in shelters.

Beza Hailu* migrated to Beirut in Lebanon to work as a maid to pay for her mother’s medical expenses in Ethiopia. But her employer physically and mentally abused her and withheld her payment. While Hailu suffered, her mother died of her illness.

“It broke my heart into pieces. I couldn’t save her. The guilt was heavy …. I became depressed, and an addict. I lost my purpose in life,” shares Hailu. When the COVID-19 pandemic arrived in Lebanon, Hailu was deported back to Ethiopia. She was referred to an Agar Ethiopia Charitable Society women’s shelter in Addis Ababa where she received intensive counseling.

“When I’d given up on myself, my counselor believed in me and inspired me. Frequent counseling sessions silenced the voice in my head that was telling me that I was hopeless. It was like I was given an opportunity to start a new life,” says Hailu.

Hailu’s counselor was one of 34 professional counselors who had completed UN Women’s training on gender-based violence counseling in 2020, funded by the Governments of Denmark, Norway, Sweden and the Netherlands. The training focuses on specific methods to provide tailored counseling and therapy to survivors of violence, founded on the core principles of ‘Do No Harm’ and women’s empowerment, from the Essential Services Package, developed under the United Nations’ Joint Global Programme on Essential Services.

“Looking back, I realize how strong and independent I was to survive what I have been through. I am a changed woman, and I am very happy,” Hailu says.

In 2020, Ethiopia’s Ministry of Women, Children and Youth, in partnership with UN Women and UNFPA, and funded by the Governments of Denmark, Norway, Sweden and the Netherlands, finalized a national Standard Operating Procedure (SOP) for shelter services that now provides guiding principles and standards for shelter provision in Ethiopia aligned with the United Nations Essential Services Package. The SOP was launched on 25 November 2021, at the kick-off of the global 16 Days of Activism to End Gender-Based Campaign.

Distributed by APO Group on behalf of UN Women.

Africa COVID-19 cases on longest run of declines since pandemic's start: WHO

Over two thirds of Africans infected by COVID-19 virus since pandemic began: WHO

Finland and Sweden to buy firearms, anti-tank weapons together