Zawya Express presents the top story, topic or trend highlighted by our editorial team as recommended reading to start your working day

The number of real estate transactions carried out across the Gulf Arab states (excluding Bahrain) declined by 30.7 percent during the first nine months of 2018, and the value of listed property firms also took a hit, a new report has shown.

The report by KAMCO Research, a division of Kuwait's KAMCO Asset Management, found that most real estate firms listed on stock markets in Saudi Arabia and the United Arab Emirates have declined in value during the first 11 months of the year.

By end of November, Saudi Arabia’s Jabal Omar Development dropped the most among the Saudi real estate companies, down 40.36 percent and Emaar The Economic City (which is developing King Abdullah Economic City) dropped 39.07 percent. On the Dubai market, two of the UAE's biggest developers, Emaar Properties and Damac Properties, dropped 25.13 percent and 40.07 percent respectively, while in Abu Dhabi Aldar Properties' share price dropped by 23.18 percent, according to the report.

The region has continued to suffer from an economic slowdown that began around two years ago following a sharp fall in oil prices in 2014 and 2015. The economic situation led the governments of Saudi Arabia and the UAE, the Arab world’s two biggest economies, to cut spending and introduce new taxes such as a five percent value-added tax on most of consumer products and services.

According to KAMCO’s report the transactions made for properties’ sales dropped by a combined 30.7 percent in the first nine months of the year in five Gulf Arab markets: Saudi Arabia, the UAE, Qatar, Oman and Kuwait - mainly as a result of declines in Saudi Arabia and Dubai.

The total amount of real estate sale transactions in the five states fell to $59.3 billion in the first nine months, from $85.6 billion in the same period last year, the report said.

However, Kuwait was the best-performing real estate market among the five countries as the value of real estate deals actually increased by 34 percent, driven by a rise in the sale of apartments, it added. Demand for Kuwait’s office space was also strong, particularly for premium office spaces.

The report said that residential rents were under pressure in most of the surveyed markets this year and “incremental office space demand continues to remain soft” due to job cuts.

The average value per transaction in the five countries declined by over 24 percent to around $173,000 in the first nine months of 2018, from $228,700 in the same period last year, the report said. 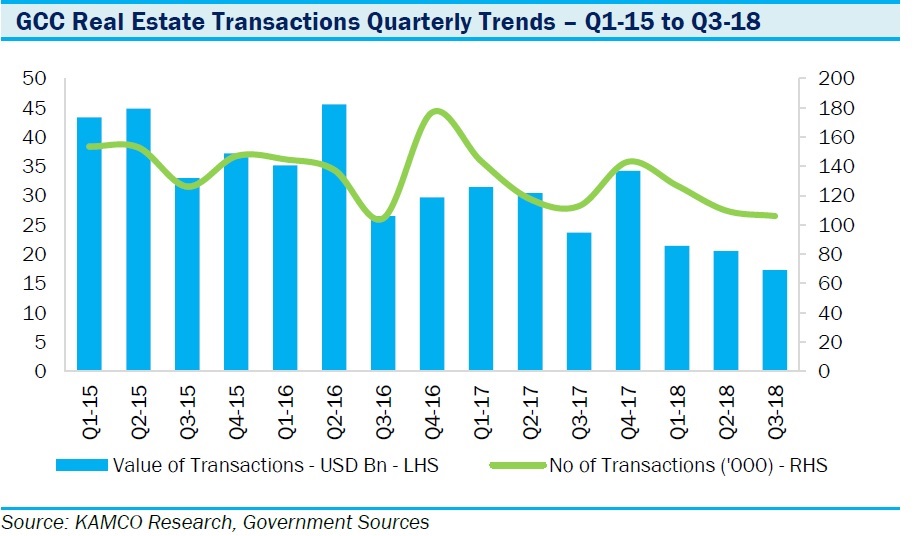 As for Dubai’s office market, the report said: “Landlord(s) continued to offer more discounted rents and attractive terms such as rent-free period, fit-out contributions and other concessions. As a result, rents in Q3-18 plunged by double digits across office districts from the start of the year, especially in DIFC and Sheikh Zayed Road, as per data from Asteco.” Asteco is a Dubai-based property management company.

In the retail segment, vacancy rates in Dubai increased to 16 percent in the third quarter of 2018, from 14 percent in the previous quarter, KAMCO said, quoting data from property consultancy JLL.

Expat women in UAE remit more of their salaries than men