shutterstock
By Michael Fahy, ZAWYA
When Abhishek Sharma, the chief executive of Foundation Holdings, returned to Dubai in 2008 to take up a role at Ithmaar Capital, the city was in its ‘glory days’, he said, with oil priced at $130 per barrel and brokers growing rich off a real estate boom. However, this all changed once the global financial crisis hit, and Ithmaar turned its focus to businesses with defensible revenues, such as healthcare and education.

“From the board, the demand was 'pick something stable, pick a market leader, pick something which is not debt-straddled',” Sharma told Zawya at an interview in the company’s Dubai office in August. “And we were lucky to discover this company called Al Noor Hospitals in 2009.”

Sharma had not really given the region’s healthcare sector too much thought, having spent his career in investment banking and private equity in the US and the UK.

But Ithmaar Capital helped to fund an expansion of Al Noor Hospitals and worked with its founder, Dr Kassem Alom, on an IPO on the London Stock Exchange in 2013. At the time of the flotation, it was valued at £672 million ($1.04 billion). When it was acquired by South Africa’s Mediclinic two years later it fetched more than double that amount - £1.4 billion (although Ithmaar Capital had sold its stake by this stage). 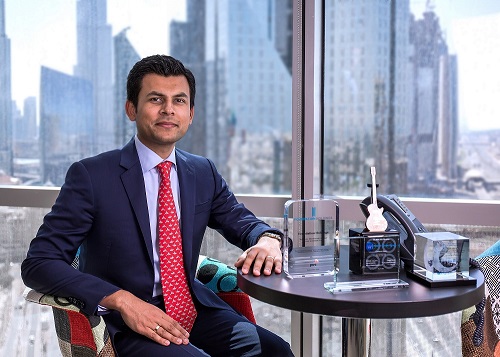 Sharma said there have been dozens of similar success stories . In 2009, Saudi Arabia’s Mouwasat Medical Services became the first listed healthcare venture in the Gulf Cooperation Council area, with a market capitalisation of about 600 million Saudi riyals ($160 million).

Foundation Holdings has been set up, at least in part, to capitalise on this wave, albeit in a very different manner.

The company, which describes itself as a ‘multi-family office investment firm’, has an impressive range of backers and board members. Murthada Sultan, who heads the Oman-based WJ Towell & Co group of businesses, is the chairman, and its directors include Air Arabia founder and CEO Adel Abdulla Ali, Pure Gold Group CEO Karim Merchant, former Landmark Group director Neelesh Bhatnagar and a former president of Rothschild Capital Partners, Justin Connor.

It is targeting the millions of blue collar workers in construction and manufacturing jobs in the United Arab Emirates, offering basic health insurance that will cover primary treatment within camps.

In April, Foundation Holdings announced that it plans to invest up to 2 billion UAE dirhams ($544 million) in healthcare, education and consumer businesses over the next five years. In February, it announced a 50:50 joint venture with Bloom Holding, through which both firms will invest a combined one billion UAE dirhams in the same sectors. The company’s plan is to build businesses and bring them to public markets.

It is targeting up to one million UAE customers for its healthcare platform, and is looking to build scale partly through acquisitions, but also consolidation and partnership deals. Sharma said he has a “war room” mapping out the labour camps around the country, with details of the clinic operators at each one. Many of these are individual, single-site practices, which he said could become part of a network that use its platform to simply record and bill work to the standards required by insurers.

He envisages being able to provide cover for as little as 550-650 dirhams per year, per worker.

“It’s not a lot of money,” Sharma said. “But if you multiply that 550-650 dirhams by four million, that’s a pretty good market to be playing in.”

He admitted that the amount charged meant that margins were not likely to be very high, but said “you do not fleece the neglected”.

He is confident of being able to sell the benefit of decent, basic healthcare to workers, as even if they don’t have high levels of disposable income it protects them against bills for one-off treatments.

He said that when researching the market, he found that some workers had made an uncomfortable choice about spending on treatment.

“One guy had to decide whether to pay $27 and not eat for three days or pluck his own tooth out.

“This is not BUPA Cromwell hospital. But the guys don’t want that. It’s better than plucking your own teeth out.”

Once the company establishes the business in the UAE, it eventually hopes to be able to replicate the other across the GCC and introduce it to India.

In education, its approach is more nuanced.

There are opportunities at the value end, especially in higher education, Sharma said, where it could partner with UAE-based universities to offer a hybrid degree. Students from across the Middle East, India and elsewhere could study at a campus in Dubai for a couple of months, but then complete most of their studies remotely through MOOCs (Massive Open Online Courses).

“Dubai has easy connectivity, it’s easy to get to and it’s safe,” Sharma added.

There are also more conventional opportunities in education provision, such as K12 (kindergarten to grade 12) schools, where 90 percent of students in Dubai attend private schools where competition for places within certain schools can be fierce.

Meanwhile, in Saudi Arabia, only about 20 percent of education is provided by private firms but a privatisation push across all sectors is likely to increase demand.

“If you see the 2030 Vision, it’s clear that they want to move it from 20 percent to 70 percent or 80 percent. That’s not going to happen by public sector money when oil is at $40. You need PPPs [public-private partnerships], you need innovation, you need private capital to step in,” Sharma argued.

The company has recruited some high-profile educators from the UAE and from the U.K. to advise on its strategy, again with a view to building businesses that can eventually be brought to public markets via an IPO.

“If you wind back 40 years ago, real estate was not an asset class. People at that point would buy equity and they would buy bonds - that’s how the world used to allocate money.

“We’re saying that in 20, or in 10 years, healthcare and education will become its own asset class,” Sharma said.

A study published last month by property consultancy JLL argued that demand for hospitals and other healthcare facilities is set to grow due to the fact that the population is both growing and ageing, with the number of people over 65 increasing by 4.4 percent per year (compared with overall population growth of 1.9 percent) to 26 million by 2020.

It said that in order to just maintain current provision levels of 1.9 beds per 1,000 people, 10,500 more beds would be required in the five major cities of Dubai, Abu Dhabi, Riyadh, Jeddah and Cairo, meaning 70 extra hospitals would be needed at a typical ratio of 150 beds per hospital.

However, if the Middle East were to increase provision in line with typical global rates for OECD countries of 4.8 beds per 1,000 people, then 470,000 new beds would be needed, or 3,130 hospitals.

“There is a pressing need for additional healthcare facilities in the region over the coming years,” said JLL Mena’s head of research, Craig Plumb.

"Given current and future constraints in government spending, it is widely recognised that the ambitious plans to improve healthcare provision in the region will depend upon attracting greater private sector investment."

The private sector has already delivered scores of hospitals in Dubai, but elsewhere in the GCC hospital provision has remained a government concern, although this looks to be changing.

In August, the governor of the Saudi Arabian General Investment Authority, Ibrahim Al-Omar, said that the ministry of health would be “just a regulator and not a service provider any more”, according to Reuters.

He added that this would open up opportunities worth $180 billion in this market over the next five years. He also said that foreign owners would be allowed to take 100 percent of equity in healthcare and education companies.