Traders work at their desks in front of the German share price index, DAX board, at the stock exchange in Frankfurt, Germany, September 27, 2016.

Global data provider Refinitiv asked more than 460 deal makers about external risks that could dent deal-making in 2021. It should come as no surprise that "pandemics and preventative measures" were the most commonly cited external risks. Requirements for meeting sustainable goals and regulation were also cited by respondents as a deterrent to deal-making. 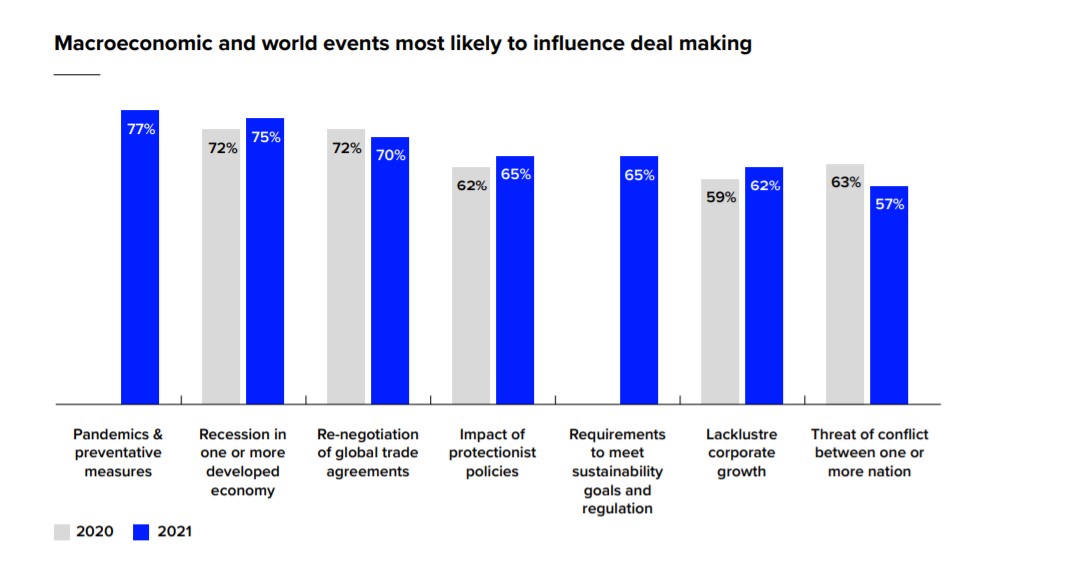 The threat of recession in one or more developed economies, the impact of protectionist policies, and concerns about lacklustre corporate growth, remain important at 75 percent, 65 percent and 62 percent respectively. In addition, the renegotiation of global trade agreements remains front-of-mind for 70 percent of deal makers, Refinitiv said in its report that focued on external and macro risks for deal makers in 2021.

"On top of these, a new factor is mentioned: the requirement to meet sustainability goals and regulation, cited by 65 percent of respondents. However, unlike other exogenous factors, sustainability is just as likely to be a driver of deals as a deterrent," the report noted.

According to 56 percent of respondents, the economic environment remains the factor most widely expected

Globally M&A activity surged in Q1 2021. Around half the deals came from the US where volumes were up 160 percent year on year at $654.1 billion.

While the number of deals was up only 6 percent from a year ago, the total value of pending and completed deals rose 93 percent to $1.3 trillion, according to Refinitiv.

M&As with MENA involvement reached $17.1 billion during the first three months of 2021, according to a Q1 report from global data provider Refinitiv.

MENA M&As saw a 19 percent increase in value compared to the same period in 2020, reaching a record number of deals at 270, the highest ever start to a quarter.

EGX30 to test its strength by breaching 10,000 points level this week

Weekly Energy Recap: If oil prices were below $70, would IEA still tell OPEC to open taps?

Who is buying Dubai's villas, apartments?