3D printing will only boost profit, market share of a few companies - report

Saudi Arabia and the UAE are scaling their adoption of 3D printing technology, especially in the construction sector

Few industries are witnessing widespread adoption of 3D printing technology, which represents only 0.1 percent of the total $13.1 trillion value added through the global manufacturing industry.

Advisory firm Moody’s Investors Service says that 3D printing technology is used in niche applications and will help boost companies’ profitability and market shares in a limited number of industries.

Manufacturers of consumer goods such as eyewear and footwear are among the industries with the strongest near-term growth prospects for the adoption of 3D printing. Other industries that will benefit include aerospace, medical devices, automotive and capital equipment, but to varying degrees, according to Moody’s report.

Meanwhile, Saudi Arabia and the UAE are scaling their adoption of 3D printing technology, especially in the construction sector. In March, the world’s largest 3D construction printer was sold to Saudi Arabia’s Elite for Construction and Development Company by Danish firm COBOD, according to media reports.

As part of Vision 2030, Saudi Arabia needs to build 1.5 million residential units in the next 10 years, and the new printer can build three-storey buildings of more than 300 square metres per floor in one go, said a press statement from COBOD.

In the UAE, the Dubai Municipality’s regulations state that in 2025 every new building in Dubai will be 25 percent 3D printed. Starting with two percent in 2019, Dubai will scale 3D printing to reach its goals set for 2025. Also, regional sales of 3D printing materials are estimated to exceed $550 million by 2025, according to media reports.

Dubai Health Authority is setting up regulations to the use of the 3D printing technology in the health sector, and will explore the use of 3D printed prosthetic limbs, teeth, and hearing aids in public clinics and hospitals. 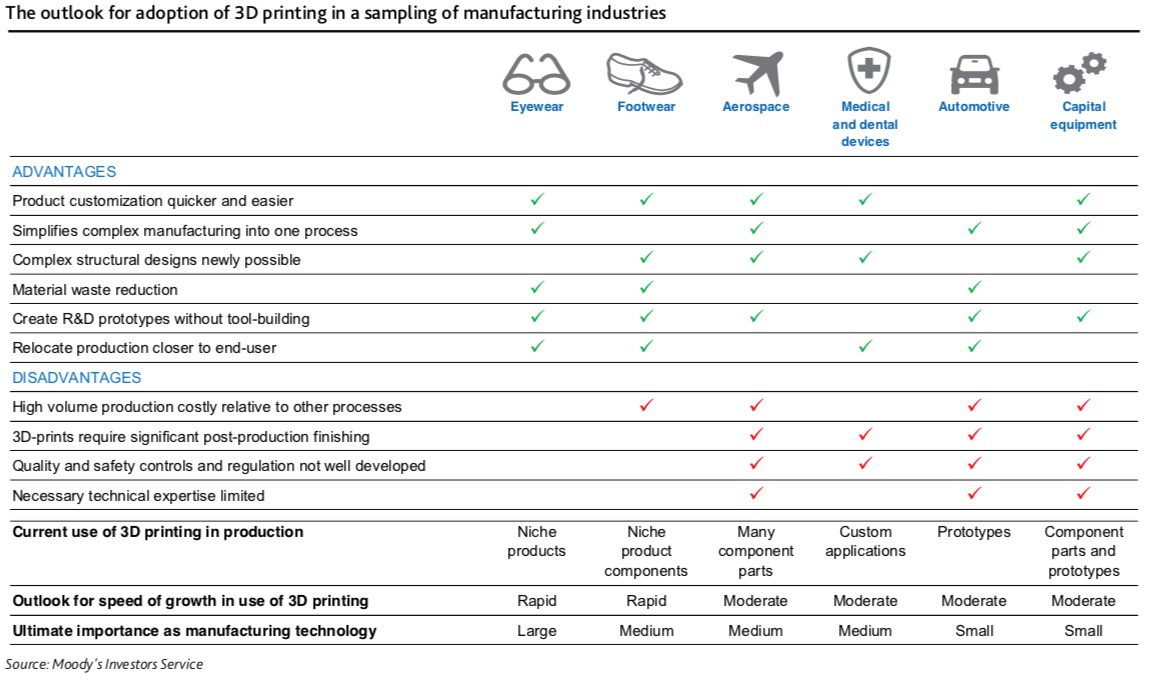 However, the 3D printing technology is yet to be a major disruption in the global manufacturing sector. Though 3D printing has existed for more than 30 years but its use largely remains confined to niche applications that are especially well suited to the natural advantages of the technology; for example, in complexity of design, product customization or the proximity of fabrication to the end user, said Moody’s report.

Still, revenue from 3D printing-related high-cost equipment, business services and materials is growing rapidly, rising by 20 to 30 percent annually from 2014 through 2018, according to the Wohlers Report and SmarTech Publishing. The development of metal printing has partially driven this growth, with revenue for this type of printing rising by more than 40 percent annually over the 2014-2018 period.

While the case for replacing industrial manufacturing on a wider scale is not yet proven, the talent gap is also cited by Moody’s as one of the hurdles in the growth of 3D printing technology.

Aerospace and automotive industries have been producing some spare parts through 3D printing, said Moody’s, adding, that despite immense benefits health sector is slow in adopting 3D printing owing to regulatory requirements.

On the other hand, companies investing in materials development for 3D printing manufacturing are well positioned for profitability gains as the market continues to grow, according to the report. Leaders in 3D printer material production include Dow Chemical, which has developed the first liquid silicone rubber material for 3D printing; Dupont, a leader in nylon feedstock; polymer producers 3M and Covestro; and industrial resin maker Henkel. 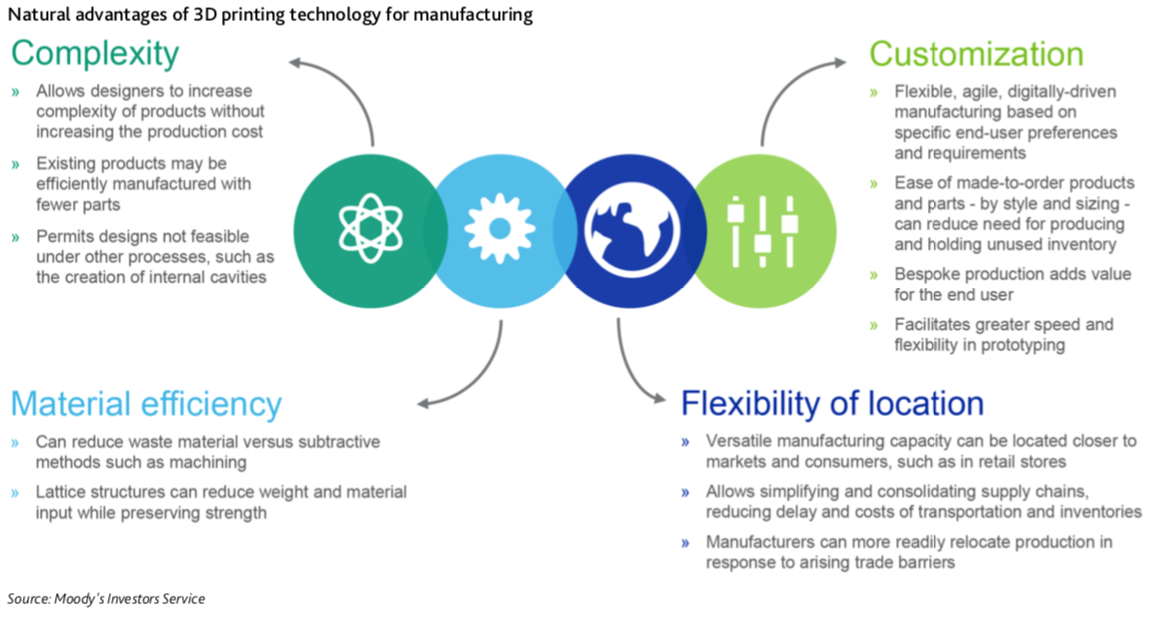 With expected growth in new adoptions of metal printers, producers of powdered metals for use in 3D printing also may expect future profitability gains from the technology. BASF has invested heavily in the production of 3D printing materials. Alcoa has invested in production facilities for titanium, nickel and aluminum powders, while ATI, Rio Tinto, and Sandvik have also made investments in the R&D of metal powders, according to Moody’s.

However, the report concludes that constraints on the extent of 3D printing growth as a mass production method suggest that for now the technology is unlikely to lead to significant disruption to most existing global manufacturing companies' market shares, profitability or geographic locations in the near to medium term.

ME cybersecurity market set to grow in 2020, but so will threats