Stock markets across the Gulf Cooperation Council and in Egypt rose sharply in April, with the aggregate stock market index of the seven countries gaining 2.45 percent during the 30-day period, as a surge in oil prices and in global markets boosted confidence amongst MENA investors.

The United States said late in April that from May it would eliminate all existing waivers that had allowed eight countries to continue buying Iranian oil without facing U.S. sanctions. For the last six months, Iran’s eight biggest buyers, mostly in Asia, had been allowed to continue importing limited volumes from Iran.

Concerns over tightening global supplies following the U.S. decision on Iranian exports pushed Brent prices 5.49 percent higher during the month, hovering near their 2019 peak of $76 per barrel.

The MSCI world index of global stock markets also rose 2.2 percent in April, data from Eikon shows, while the MSCI emerging market index gained 0.86 percent. First quarter earnings were one of the main drivers for markets both globally and regionally during the month.

The Saudi stock market was the best performer in the region, adding 5.5 percent in April.

Nishit Lakhotia, head of research at Bahrain-based bank SICO, told Zawya by email that banks and the consumer sector were the main boost for Tadawul in April.

"The key theme continues to be FTSE and MSCI index-related inclusion as more keeps flowing into the market from QFIs (qualified foreign investors) in particular,” Lakhotia said, adding that he expects May to be strong as “MSCI first tranche is due towards the end of the month”.

The first tranche out of five from the Saudi market inclusion in the FTSE Emerging All Cap Index took place on March 18. Tadawul will also join the closely-followed MSCI emerging market index in May 2019.

Lakhotia said earnings announcements in other sectors such as building materials and consumer-facing companies were also good, but described results in the petrochemicals sector as "weak".

“Market turnover is gradually improving but still remains below $1bn levels. Strength in oil also helped the sentiments and if oil continues to trend higher, led by how the situation in Iran and Venezuela develops, it can add to the market’s momentum in the coming weeks,” Lakhotia said.

Oil prices have also been boosted since the start of the year by the fact that sanctions have been imposed by the U.S. on Venezuala's state-owned oil firm PDVSA, curbing its exports. Venezuela’s oil output fell to under 1 million barrels per day (bpd) in March, a drop of almost 500,000 bpd from February.

The Dubai Financial Market (DFM) index climbed 5.02 percent in April and was the second-best performer in the region.

Lakhotia said that “UAE markets did well, particularly Dubai banks Emirates NBD and DIB,” noting that the Dubai index increase was despite “weakness in (the) real estate sector”.

Dubai Islamic Bank’s shares added 6.6 percent in April after the bank reported a rise in first quarter earnings for 2019 and announced that it is exploring the possible acquisition of privately-owned Islamic lender Noor Bank. (Read more here).

Abu Dhabi’s index also gained 3.61 percent and was the third-best performer against its peers in the region.

The rise in the Abu Dhabi index was led by gains in First Abu Dhabi Bank (FAB), Lakhotia said. FAB’s shares gained 5.26 percent and the bank reported a 3.67 percent increase in first quarter net profit. He said that it expects that banks will "remain a key sector driver within the (UAE) market, while Real Estate stocks may underperform due to lack of (a) catalyst”.

Qatar’s stock market also had a positive month, with the index adding 2.67 percent in April.

A research note by the Kuwait Asset Management Company (Kamco Research) on Wednesday said that performance varied across sectors, but was "led by Banks & Financial Services companies", which reported aggregate gains of 6.9 percent month-on-month.

Qatar Fuel Company (Woqod) and Mesaieed Petrochemical Holding are both eligible for inclusion into MSCI's emerging market index during a semi-annual review in May. Arqaam Capital said that it expects passive inflows of $240 million and $230 million respectively into the two stocks as a result of the inclusion.

Kamco's note described trading activity on the Qatar stock market as "mixed", given that the value of shares traded dropped 19.8 percent to 5.5 billion Qatari riyals ($1.5 billion), although the volume of shares traded increased by 20.8 percent month-on-month. QNB was the top share traded by value.

“Egypt’s economy is doing well with GDP expected to grow by 5.5 percent in 2019 and unemployment at the lowest level since 2011,” Vijay Valecha, chief market analyst at Century Financial told Zawya by email.

“The up move seems to be triggered by Moody’s upgrade of CIB’s long term local currency deposit rating to B2 from B3 and in fact, it can be said that CIB single-handedly lifted EGX 30 into positive territory,” Valecha said. After the month-end, the bank subsequently reported a 30.6 percent year-on-year increase in net profit for the first quarter of 2019 of 2.64 billion Egyptian pounds ($153.5 million).

Ratings agency Moody’s upgraded the credit rating of five Egyptian banks (including CIB) at the end of April.

“In April, only six out of 30 stocks ended in positive territory,” Valecha added. One of the biggest drags on the index was Egypt Kuwait Holding, dropping 7.45 percent.

From a technical analysis point of view, Valecha said that “EGX 30 can continue the positive momentum and rally to 15,000 level where it will encounter resistance from 20-day as well as 50-day simple moving averages”.

“Strong support is available for the month at the 200-day simple moving average of 14,400 which is coincidentally near the March low,” Valecha said.

Oman’s stock market was the only regional stock exchange incurring losses during the period, with the index dropping 0.95 percent.

The Muscat Securities Market index hit a 14-year low in April, dropping below the 3,950 level after breaching the 4,000 level in March for the first time since 2005.

“At the start of April, the market was actually rising on week-on-week basis as corporate 1Q19 results poured in,” Ayisha Zia Hassan Naseer, research analyst at Ubhar Capital, told Zawya by email.

“However, the second half of the month witnessed a decline amidst modest trading volumes,” Nasseer added.

On 19 April, ratings agency S&P Global cut its outlook on Oman to negative from stable, while affirming its debt score at BB.

“S&P rating changes have generally not affected Oman’s stock market performance in the past few years, and a similar trend was observed this time around,” Naseer said.

“The market’s performance a week after an outlook change or a rating change has usually remained mixed, as shown below,” she added. 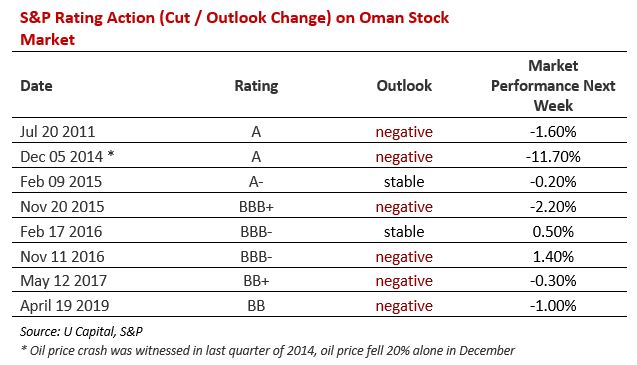 Ratings agency Moody's downgraded Oman's sovereign rating to junk status in March. It was the last of the three major global ratings agencies to do so. (Read more here).

At the end of May, Brent oil prices were trading near $72.80 per barrel.

“The attractiveness of the large-cap, fundamentally strong stocks in Kuwait comes primarily on the back of the expected MSCI decision in addition to earnings that continue to remain resilient despite subdued regional economic growth,” Kamco’s report said.

MSCI last year indicated that it may reclassify the Kuwaiti stock market from Frontier to Emerging Markets as part of its 2019 Annual Market Classification Review. Kuwait will hear in mid-2019 if the upgrade will happen. (Read more here).

At the end of the month, Kuwait’s Capital Markets Authority launched the first part of a third phase of its market development project (Read more here).

Kamco said in its report that the key changes proposed as part of the reforms will include the “introduction of stock lending and borrowing, improved off-market trade, adding an after-hours trading session and improvements to the investment fund trading platform".

The banking sector provided one of the main boosts to the Bahraini bourse. Ahli United Bank (AUB)’s shares rose 2.48 percent as the bank reported a 10.42 percent increase in first quarter net profit.

Kamco's report added that AUB was the most actively traded stock on the Bahraini exchange in April, with 15.6 million Bahraini dinars ($41.5 million) worth of shares changing hands on the exchange.

“Of the 11 stocks that closed in the green in April-19, Bank of Bahrain and Kuwait (BBKB) topped the gainers list, as it witnessed a 6.2 percent m-o-m (month-on-month) increase, followed by GFH with monthly gains of 6.0 percent,” the report added.

Factors that could hold back global sukuk issuance in 2022