Press Release
Malaysia topped the list for the second year running while the United Arab Emirates, Turkey, Indonesia and Qatar round off the top five OIC countries

Singapore is number one on the list of non-OIC countries, followed by Thailand, the UK, South Africa and Hong Kong

Asia and Europe are the two leading regions attracting Muslim visitors, accounting for 87 percent of the entire Muslim travel market

In 2015, the estimated total Muslim visitor arrivals were 117 million, representing 10 percent of the entire travel economy. This is expected to grow to 168 million travelers in 2020, spending over US$200 billion.

Saudi Arabia has claimed its spot as the sixth most popular destination in the global Muslim travel market, according to the most comprehensive research focusing on this fast-growing sector.

Malaysia held on to its pole position followed by UAE, Turkey, Indonesia and Qatar which made up the top five. Indonesia jumped two places to take the fourth spot in this year's ranking with Bahrain becoming the biggest mover by climbing four spots to take the tenth position.

Singapore also retained its pole position for the non-OIC destinations, with Thailand, the UK, South Africa and Hong Kong making up the top five.

The study also revealed that in 2015, there were an estimated 117 million Muslim visitor arrivals globally, representing close to 10 percent of the entire travel market. This is forecasted to grow to 168 million visitors by 2020 equal to 11 percent of the market segment with a market value projected to exceed US$200 billion.

Asia and Europe were also revealed as the two leading regions in the world for attracting Muslim visitors - accounting for 87 percent of the entire market.

"Many already successful destinations around the world are looking to diversify their visitor base to maintain tourist growth rates in today's increasingly competitive travel market and the GCC is at the forefront of understanding the needs and preferences of Muslim travelers and how to adapt and tailor products and services for them. The Muslim travel market is flourishing in each of the GCC states and these high rankings are further testament to the continuous growth and development of this sector in these countries. We believe that the GMTI provides real value to businesses and governments looking to tap into this important market segment further," said Raghav Prasad, General Manager, Gulf Countries, MasterCard.

"The MasterCard-CrescentRating Global Muslim Travel Index 2016 has now become the number one tool for destinations around the world to realign their strategies to reach out to the Muslim consumer.One of the biggest trends we are seeing is non-OIC destinations making a concerted effort to attract the Muslim tourist and they now represent over 63 percent of the destinations covered in the GMTI. For example, Japan and Philippines have taken some major steps over the last few months to diversify their visitor arrivals and boost their economy in the process,"said Fazal Bahardeen, CEO of CrescentRating & HalalTrip.

The GMTI 2016 is the most comprehensive research available on one of the fastest-growing tourism sectors in the world, which represents 10 percent of the entire travel economy.

The GMTI looks at in-depth data covering 130 destinations, up from 100 in 2015. This is the first time such thorough insights have been provided on one of the world's fastest-growing tourism sectors.

The Index helps destinations, travel services and investors to track the health and growth of this travel segment while benchmarking their individual progress in reaching out to this growing market.

All 130 destinations in the GMTI were scored against a backdrop of criteria that included suitability as a family holiday destination, the level of services and facilities it provides, accommodation options, marketing initiatives as well as visitor arrivals.

Each criterion was then weighted to make up the overall index score. This year, two new criteria - air connectivity and visa restrictions - were added to further enhance the Index.

Saudi Arabia had an Index score of 70.4, ranking sixth in the overall combined list. Malaysia scored 81.9, followed by UAE at 74.7, Turkey at 73.9 and Indonesia at 70.6. In comparison, the highest scoring non-OIC destination Singapore scored 68.4 with second place Thailand at 59.5.

Taiwan and Japan have continued to improve their overall rankings and the average GMTI scores by region show Asia as the leading region. 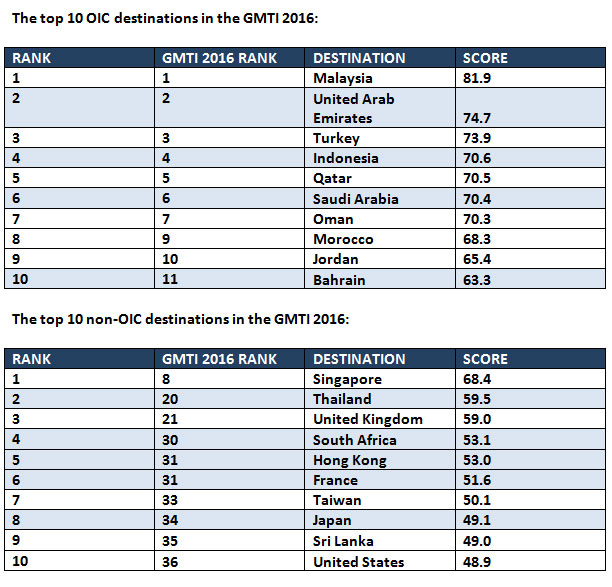 The full report is available here.

About CrescentRating Pte Ltd:
CrescentRating is the world's leading authority on halal-friendly travel. The company's vision is to lead, innovate and drive this segment through practical and deliverable solutions in what is regarded today as one of the fastest growing segment in the tourism sector. The company uses insight, industry intelligence, lifestyle, behaviour and research on the needs of the Muslim traveller to deliver guidance on all aspects of halal-friendly travel to organisations across the globe.

About MasterCard:
MasterCard (NYSE: MA), www.mastercard.com, is a technology company in the global payments industry. We operate the world's fastest payments processing network, connecting consumers, financial institutions, merchants, governments and businesses in more than 210 destinations and territories. MasterCard's products and solutions make everyday commerce activities - such as shopping, traveling, running a business and managing finances - easier, more secure and more efficient for everyone. Follow us on Twitter @MasterCardAP and @MasterCardNews, join the discussion on the Cashless Pioneers Blog and subscribe for the latest news on the Engagement Bureau.

India's daily COVID-19 deaths near 4,000 as WHO flags concern

Sterling set for second week of gains versus dollar