European commercial real estate investment volumes are forecast to reach €230bn by the end of the year, which would mean that more than €200bn will have been invested in European commercial property for the sixth consecutive year, according to Savills. The firm notes that this is unprecedented in the history of the European investment market and underlines the continent’s status as a safe haven for investment.

According to the international real estate advisor, whilst Germany, the UK and France will continue to attract the lion’s share of investment, Poland (+46%), Denmark (+38%), Finland (+32%) and Portugal (+27%) are all forecast to significantly see commercial investment volumes exceed their respective five year averages in 2019 (see Chart 1). 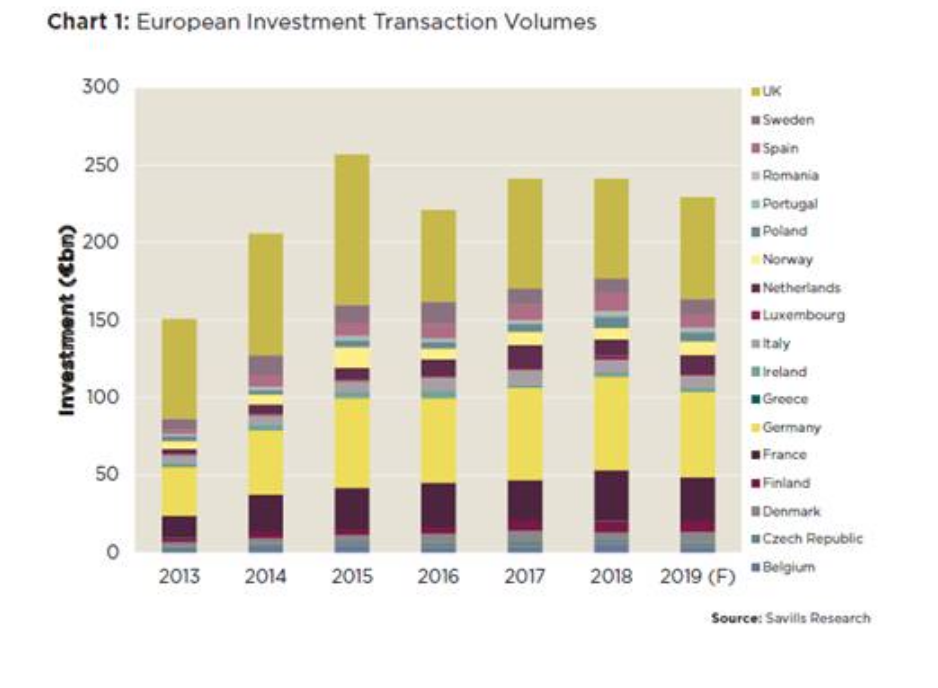 The US, followed by Singapore and South Korea made up the three largest non-European investor groups in 2018 and are forecast to continue to dominate in 2019, says Savills.

Lydia Brissy, Director, European Research, Savills, says: “The US remained the major contributor in the European property market accounting for 48% of the non-European volume recorded in 2018 at €27.4bn, with France becoming their main targeted destination followed by the UK and Germany. 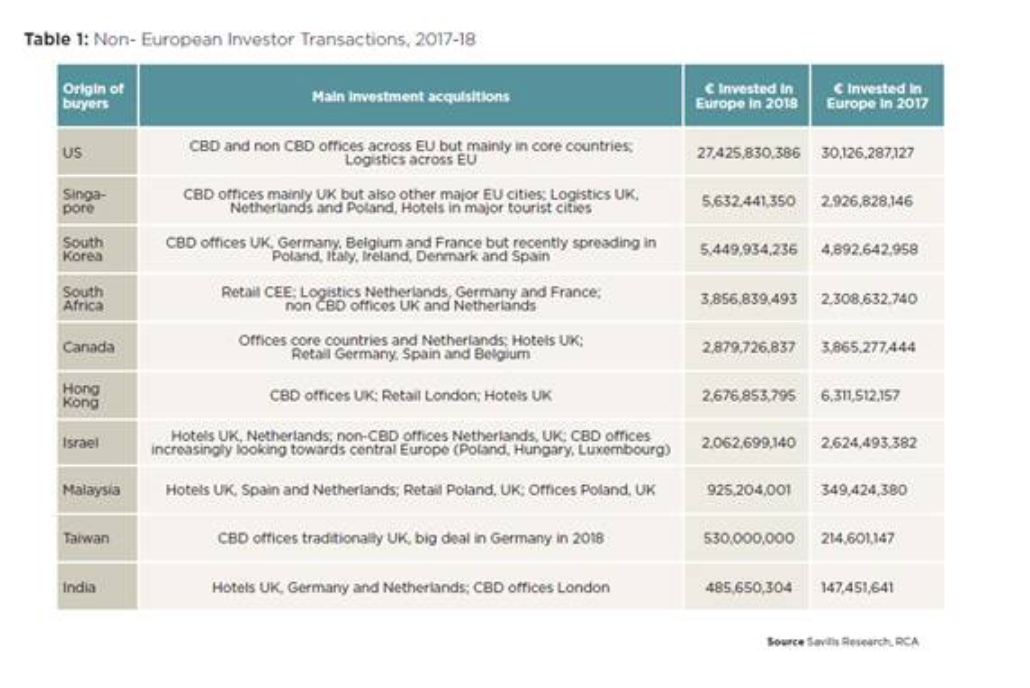 “At the same time, Singaporean investments in Europe almost doubled from €2.9bn in 2017 to over €5.6bn in 2018, accounting for 10% of the total overseas volume and making them the second biggest non-European investor group. South Koreans invested €5.4bn in 2018, up from €4.89 in 2017, the third biggest investor group. While continuing to target offices in CBD locations they have recently broadened their market coverage to non-core countries, notably Belgium, Poland, Italy, Ireland, Denmark and Spain.”

Mike Barnes, Associate, European Research, Savills, adds: “As well as logistics, multifamily investment in core cities with strong demographics will remain high on the wish list of investors this year. In the Netherlands, for example, we expect total residential investment volumes to be in line with office investment volumes. We also expect an increasing proportion of new office and residential space to be delivered in mixed-use schemes as landlords look to diversify their income pool.” 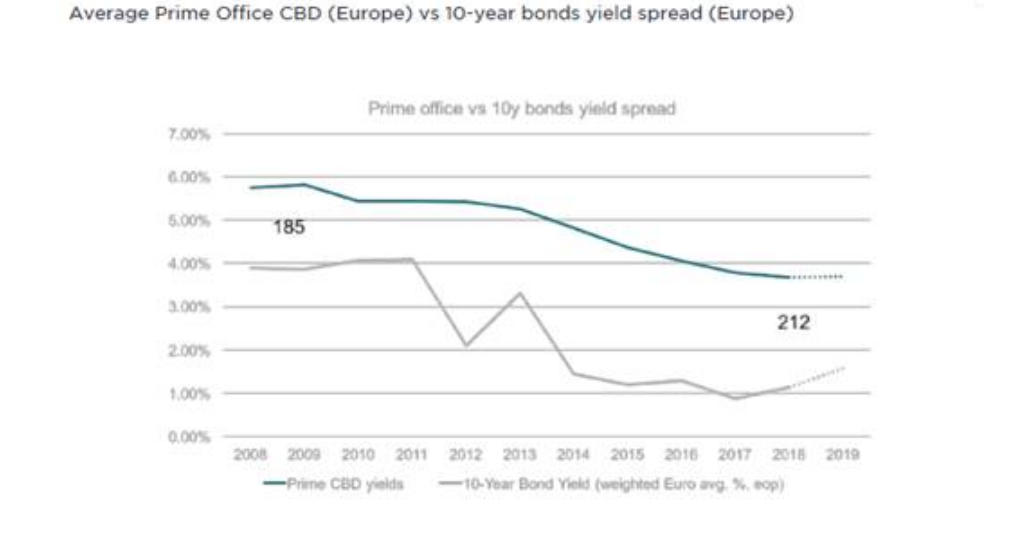 Savills highlights that the gap between average European Prime Office CBD yields and 10-year government bonds is wide by historical standards (212 bps in 2018, compared to 185 bps in 2008/2009, see graph below) and as long as this gap remains, buyers will continue to invest in commercial real estate to receive higher returns in an income-led environment.

Marcus Lemli, Head of European investment and CEO of Savills in Germany, says: “We expect the majority of European commercial property yields to remain fairly stable over the next six months. We are seeing South Korean and Singaporean investors in particular increase their investment volume and expect South Korean activity in continental Europe and, increasingly in secondary locations, to grow in 2019.

“While offices will continue to be the asset class of choice, industrial and logistics assets across Europe continue to attract investors, particularly those from the US. Income and rental growth opportunities are becoming the two main drivers for investors’ returns across all sectors which requires more in-depth and granular analysis on a city area by city area level.”

European real estate markets also continue to be an extremely attractive pull for Middle Eastern capital due to a number of factors, mainly security of income with long-term leases to blue-chip, international businesses, established legal frameworks, availability of finance, market liquidity for both entering & exiting the markets, as well as the diversity of large scale assets available.

Murray Strang, Head of Dubai Office at Savills said: “While Middle Eastern markets are continuing to develop domestically, much of what European markets offer still holds plenty of appeal for the development and growth of Arab wealth overseas. This has been proven by regular acquisitional activity by Middle Eastern entities throughout Europe over 2018. We expect to witness the same appetite in 2019 and beyond.”

About Savills:
Savills is a global real estate services provider listed on the London Stock Exchange. Savills operates from over 600 owned and associate offices, employing more than 35,000 people in over 60 countries throughout the Americas, the UK, Europe, Asia Pacific, Africa and the Middle East, offering a broad range of specialist advisory, management and transactional services to clients all over the world.

India to give homegrown vaccine in seven more states this week

Australia has eye on vaccination drive even though coronavirus under control