DFM announces the inclusion of "EMAAR DEVELOPMENT" into the General Index

Dubai: Dubai Financial Market announced that the shares of EMAAR DEVELOPMENT will be added to its general index (DFMGI) and to sector indices as of Sunday January 7, 2018 lifting the number of companies included in the index to 37 companies.

Shares of EMAAR DEVELOPMENT have been added to the DFM General Index and Real Estate & Construction sub-index. The number of the outstanding shares of the company is 4 billion shares, while the percentage of  free float shares as per the index rules is 25%, and number of shares included in the index sample is 1 billion shares.

Table: The DFM General Index sample and weights of companies included in the index: 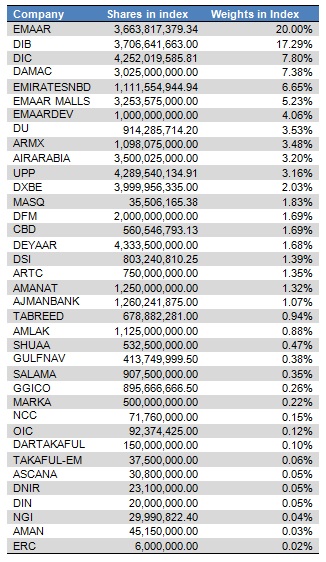 About Dubai Financial Market:
Dubai Financial Market (DFM) was established as a public institution with its own independent corporate body. DFM operates as a secondary market for the trading of securities issued by public shareholding companies, bonds issued by the Federal Government or any of the local Governments and public institutions in the country, units of investment funds and any other financial instruments, local or foreign, which are accepted by the market. The DFM commenced operations on March 26, 2000. Following its initial public offering in November 2006, when DFM offered 1.6 billion shares, representing 20 per cent of its paid-up capital of AED 8 billion, DFM became a public joint stock company. Following the IPO, the Government of Dubai retained the remaining 80 per cent of DFM Company through Borse Dubai Limited. www.dfm.ae