Just Compensation? Salaries to go up in UAE, India this year

Nearly two-third of UAE residents expect a salary increase in this year following a year of wage stagnation in 2018.

Salaries in the UAE are expected to increase in 2019 as nearly two-third of UAE salary expect a salary hike this, according to new survey and research report released on Sunday.

In the UAE, an inflation rate of 3.2 per cent combined with pay increases of 3.9 per cent means that real wages are expected to increase by 0.7 per cent. Last year real wages were predicted to fall by 0.5 per cent, says Korn Ferry report.

"The UAE continues to position itself as a highly attractive workplace destination in the region. Average real salary increases are projected to move back to a positive level after being in negative figures in 2018. At the same time, inflation has halved in the last 12 months and the cost of living is declining, resulting in greater disposable income for workers at all levels," said Vijay Gandhi, Regional Director - Europe, Middle East & Africa, Korn Ferry Products.

A survey conducted by yallacompare among 1,200 UAE residents revealed that nearly two-third of the residents expect a salary increase this year, following a year of wage stagnation in 2018.

The Consumer Confidence Tracker Q4 discovered that 65 per cent of respondents expect to be given a salary increase in the next 12 months, the same number that said they said they had not received one in the previous 12 months. 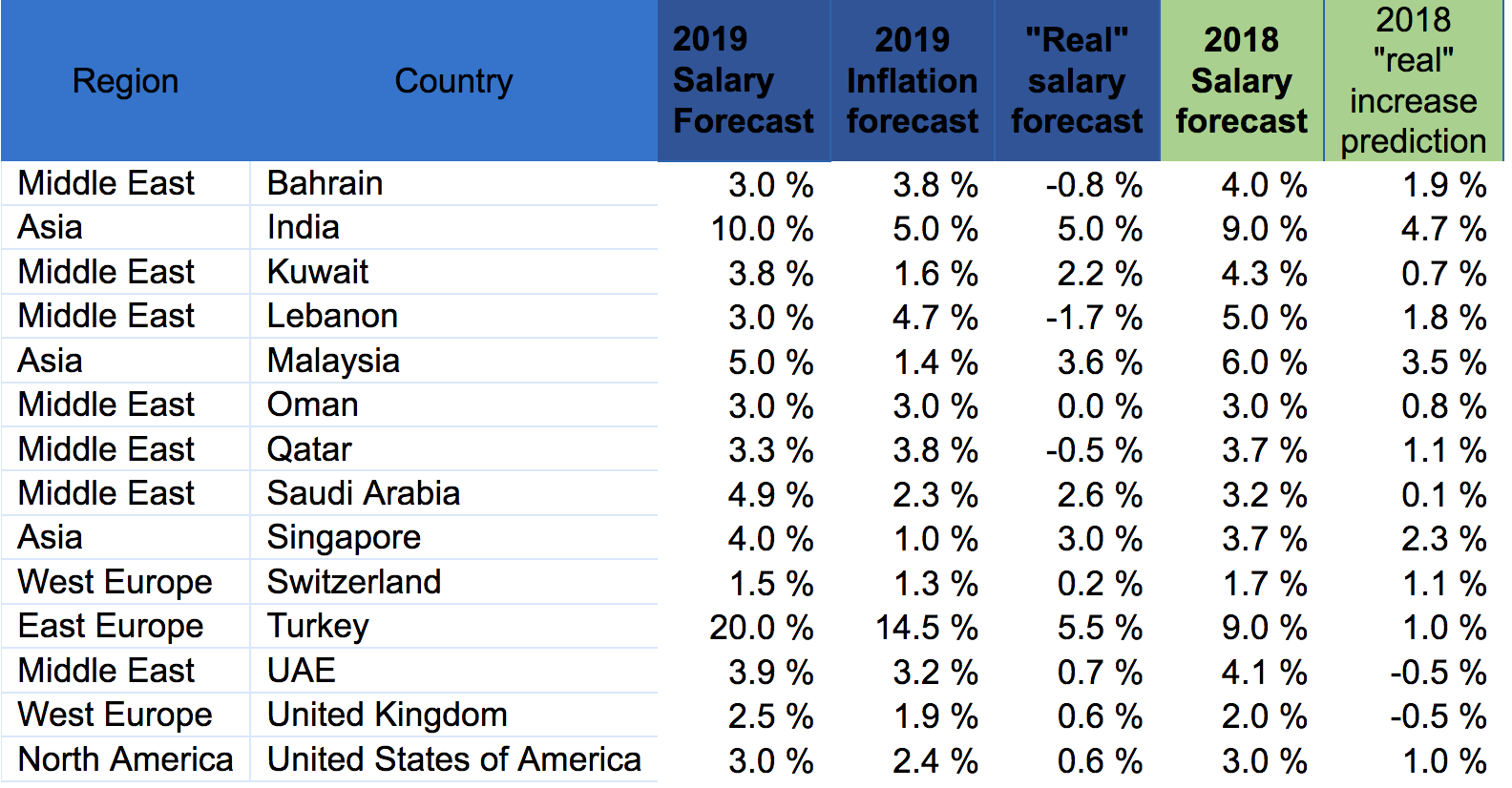 Reflecting their increased sense of confidence, there was a jump in those who said they feel more secure in their job (37 per cent in Q4 versus 32 per cent in Q3).

"UAE residents clearly feel that now is their time," said Jonathan Rawling, CFO of yallacompare. "They had to go without salary increases in 2018 and the survey data shows that many struggled as a result. They now expect their patience and loyalty to be rewarded."

The yallacopare study said that wage stagnation may have impacted UAE residents' ability to remit and save money. The number that said they remitted money regularly was down 5 per cent (at 84per cent in Q4 versus 88per cent in Q3).

"It's interesting that the numbers saying they do save and don't save money regularly have both increased," said Rawling. "While UAE residents appear to be committed to the principles of saving and sending money home, some are clearly finding it more challenging to do so. It shows once again that those salary increases many are expecting this year really need to come through."

Reflecting their increased confidence, 45 per cent of respondents say they are now less likely to leave the UAE because of their finances and just 24 per cent are more likely. The corresponding figures for Q3 were 38 per cent and 34 per cent.

Kuwait ranks second in the region in projected average real salary increase, coming in at 2.2 per cent. That's based on an inflation rate forecast at 1.6 per cent and expected salary increase of 3.8 per cent.

"Whilst the Middle East continues to face a similar inflationary pressure as we are seeing across the globe, key financial centres should see improved performance in 2019. Saudi Arabia and Kuwait are expected to outpace the region in terms of real salary increases, with both showing significant year-on-year increases," said Vijay Gandhi, Regional Director - Europe, Middle East & Africa, Korn Ferry Products.

Globally, Korn Ferry reveals that, adjusted for inflation, real-wage salaries globally are expected to grow only an average of 1.0 per cent in 2019. This is down from a 1.5 per cent prediction for 2018.

"With inflation rising in most parts of the world, we're seeing a cut in real-wage increases across the globe," said Bob Wesselkamper, Korn Ferry Global Head of Rewards and Benefits Solutions.

"The percentage of salary increase or decrease will vary by role, industry, country and region, but one thing is clear, on average, employees are not seeing the same real pay growth they did even one year ago."

Saudi imports up 18% in December