Beni: MONUSCO builds a new camp for FARDC in Kididiwe 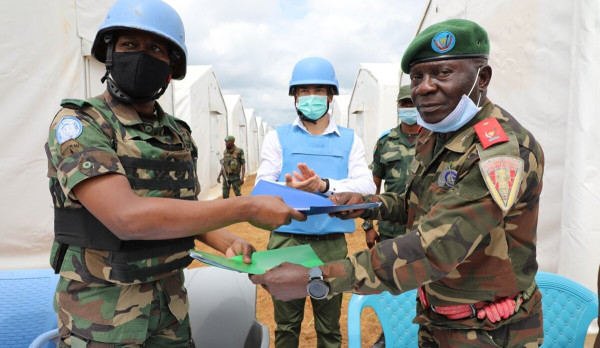 "I am delighted". These are the words used by the Sokola 1 operations commander, General Bertin Mputela, upon receiving the Kididiwe camp on Saturday November 20, 2021 from one of MONUSCO's deputy force commanders, General John Tchaeka. “I am very happy with the accommodation provided for my troops. It's a great site. MONUSCO helped us to put up the tents for the troops and for the operations”, confides General Mputela.

Long occupied by the ADF rebels, Kididiwe, located 11 km east of Beni, was captured back by the armed forces of the DRC in 2019. MONUSCO then decided to build a military camp there to help the Congolese troops to settle in permanently to avoid a possible return of the rebels, the area having been the scene of operations carried out for several weeks by the Congolese armed forces backed by MONUSCO peacekeepers.

“It is part of our strategy to combat armed groups, consisting in flushing them out. Once relocated, we create conditions for FARDC to take control of the area and dominate it", explained the interim head of MONUSCO office in Beni, Abdourahamane Ganda, further stating: "Kididiwe is rid of armed groups and as from now on, FARDC will permanently settle there to control and dominate the area”. Kididiwe camp will be home to several hundred Congolese army troops engaged in the fighting against armed groups in Beni.

Abdourahamane Ganda said a total of five camps, like Kididiwe, will be built and turned over to the Congolese army. "There is still a lot to do, and we must work together," he noted, explaining that the construction of these camps is part of the strategy to step up the operational capacities of the Congolese army.

“We maintain a very good level of cooperation. We do joint planning. We work together on the ground, hand in hand”, concluded the interim head of office, applauding the joint operations carried out with FARDC against armed groups in Beni region.