Affordable housing is set to gain traction in the UAE as property developers shift their focus to this segment by targeting the middle-income population in a bid to double their share in total real estate projects by 2022, experts say.

Latest data show that the UAE is the second-biggest market for affordable housing in the GCC as it requires 98,000 units by 2022 to cater to the needs of the middle-income group, those earning between Dh15,000 to Dh30,000 per month. However, a gap in the market still exists for households earning less than Dh10,000 monthly, offering a huge opportunity to developers to invest in the affordable segment in line with a new housing policy announced by the UAE government to provide better options to residents.

Industry experts said about 63,000 units are likely to be delivered in Dubai this year ahead of Expo 2020, approximately only 12,000 of which will be classified affordable. However, this segment will pick up momentum in the next three years as developers are expanding their development portfolio to cater to the huge demand from middle-income groups.

According to the latest report by Property Finder Group, there is an increasing number of projects dedicated to middle-income classes. However, in the home-ownership market, less than 20 per cent of middle-income projects are affordable to households earning less than Dh15,000 per month. 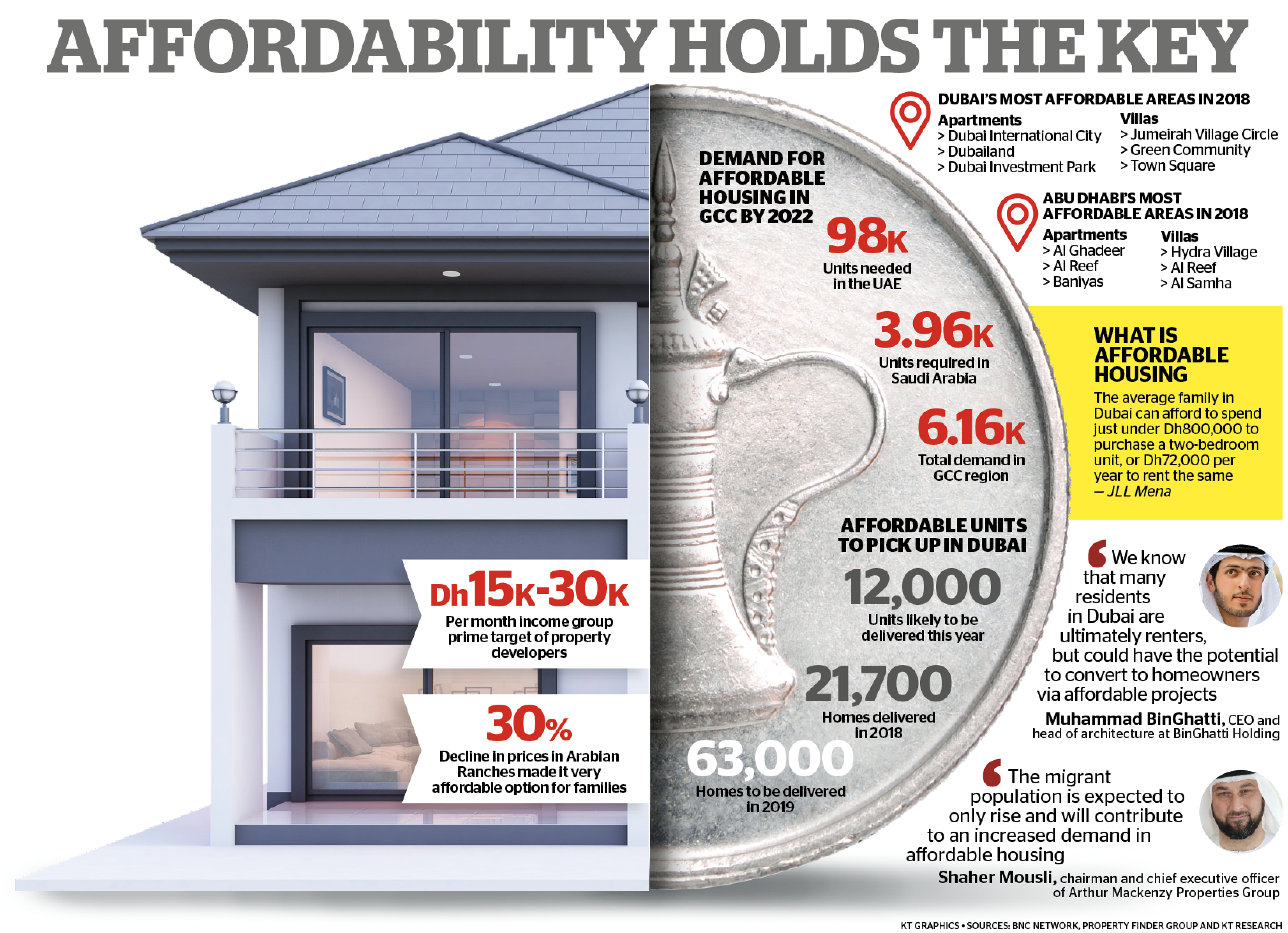 "Affordable housing allows for continued growth, development and competition, while providing an element of long-term market stability and sustainability," said Muhammad BinGhatti, CEO and head of architecture at BinGhatti Holding.

Until mid-2014, he said real estate projects were aimed toward the luxury segment. However, there has been a positive shift towards more affordable projects due to strong demand from the growing middle class in the region.
"We know that many residents in Dubai are ultimately renters, but could have the potential to convert to homeowners via affordable projects," BinGhatti said, adding that budget-friendly properties provide better investment returns than luxury properties, which are often held as trophy assets.
Affordable areas
At Dh536 per sqft, International City was by far the cheapest place to buy an apartment in Dubai last year, according to Property Finder Group's report.
Dubailand (Dh662) and Dubai Investment Park (Dh690) were the next two most-affordable options, it said, adding that Arabian Ranches has reduced in price by up to 30 per cent last year making it a very affordable option for families.
Jumeirah Village Circle at Dh646 a sqft was the most affordable place to buy a villa in Dubai last year as prices fell 11.1 per cent in the area. Green Community (Dh663) and Town Square (Dh738) were the next most affordable options.
"UAE real estate, marked by 2018, has developed a variety of affordable options suitable for almost all budgets. This factor has dramatically increased the competition within the region between the real estate giants and emerging boutique developers," said Anna Sheremet, head of sales at Sweid & Sweid.
In Abu Dhabi, the report said affordable communities outperformed the more expensive developments last year. Al Ghadeer (Dh794) was the most affordable area to buy an apartment in the capital while Al Reef (Dh805) and Baniyas (Dh913) were the next two most affordable options.
For buying a villa in the capital, Hydra Village (Dh468) was the most affordable place. It was followed by Al Reef (Dh650), Al Samha (712) and Al Ghadeer (Dh750).
Largest consumer base
Atif Rahman, partner and director of Danube Properties, said middle-income households are the largest consumer base in any economy and their well-being depends on the availability of affordable homes. They are the largest economic group that have historically remained out of the freehold real estate market - for a long time, partly due to the lack of affordable home supplies.
"As the real estate market matures, it will rely on the real demand to grow - which can only come from affordable homes segment, while luxury real estate will continue to cater to the minority section of the real estate consumer base. We believe the real demand in the affordable segment is very high - in fact the highest," he said.
Shaher Mousli, chairman and chief executive officer of Arthur Mackenzy Properties Group, said affordable housing is a significant consideration for the government as well as developers given the high rate of migrants who come here looking for a job, making this country their home and who are a major portion of the overall population.
Referring to latest research reports, he said households in Dubai with an income between Dh3,000 and Dh10,000 per month represent almost a quarter of its three million population.
"The percentage is similar in Abu Dhabi and this segment is only growing in both cities. The number of affordable residential units in Dubai and Abu Dhabi should ideally be able to meet this requirement," Mousli said.
"We are already seeing and will receive more influx of new residents arriving in to Dubai to take up jobs related to Expo 2020. The migrant population is also expected to only rise, all this will contribute to an increased demand in affordable housing," he added.
Sofya Shamuzova, founder and CEO of Stars Dome Group and Mall Global, said local reports and stats indicate that a ballpark 25 per cent to 30 per cent of the households in Abu Dhabi as well as Dubai are in the middle-income category and with the country's robust development plans, this number is likely to grow after 2020. It is important to be able to offer such a number of affordable housing units to satisfy the need.
"We try to offer reliable housing solutions to those with monthly salaries that make them eligible for a mortgage, which is around Dh8,000 to Dh15,000 per month. However, the word 'affordable' lacks a set definition in this market hence the range is not set in stone," she said.
Imran Farooq, CEO of Samana Developers, said there is huge demand and competition for low-cost units in the UAE and developers, especially in Dubai, are weighing up the option between high- and low-end developments.
"For investors, the affordable housing trend is a growing opportunity, which will be dominated in 2019 as we head up to the peak opportunity of Expo 2020," he added.
In the 9.68 million population of the UAE, he said there are 88,700 millionaires. The remaining 8.79 million include a substantial number of prospect buyers who are currently seriously thinking to buy, instead of living in a rented apartment, he said.
Sunil Gomes, CEO of Gemini Property Developers, said the affordable housing segment is set to significantly grow in both Dubai and Abu Dhabi in years to come.
"A massive influx of talent is expected as a result of Expo 2020, with the fair expected to create nearly 277,000 new jobs in the UAE and attract nearly 25 million visitors. These numbers set the tone for a rising demand for affordable and budget properties to cater to the lower and middle-income group among those visiting, taking up temporary jobs or deciding to stay on permanently," he said.
"A real estate market's stability rests with 'real demand', i.e. users buying homes. And today there is a definite shift in sentiment among buyers, owing to government reforms and a plateauing of prices, to buy instead of rent. This owner-occupier trend will boost the affordable housing segment further."