Major Saudi banks report surge in profits by 34.1 percent for the first quarter

Dubai – Leading global professional services firm Alvarez & Marsal (A&M) in its latest Saudi Arabia Banking Pulse for Q1 2021 highlights that the top 10 Saudi banks have rebounded to deliver blockbuster first-quarter profit as the aggregate income increased substantially by 34.1 percent. The strong earnings are riding on the improving macroeconomic conditions, the Kingdom’s buoyant capital market, and a significant decrease in impairments.

In the traditional business of loans and deposits, the report indicates that growth in loans and advances (L&A) increased by 5 percent in Q1’21 while deposit growth slowed to 2.2 percent in the same period. The lending picked up on the back of mortgage financing in the retail sector driven by a variety of government initiatives to increase home ownership.

The Cost of Risk (CoR) across all the banks fell to its lowest level in the last five quarters from 1.3 percent in Q4’20 to 0.6 percent in Q1’21 and reached the pre-pandemic level. The total impairments declined by 50 percent as the banks saw a reversal of some bad loans that had previously been set aside during the Covid-19 pandemic.

The prevailing trends identified for Q1 2021 are as follows:

The table below sets out the key metrics: 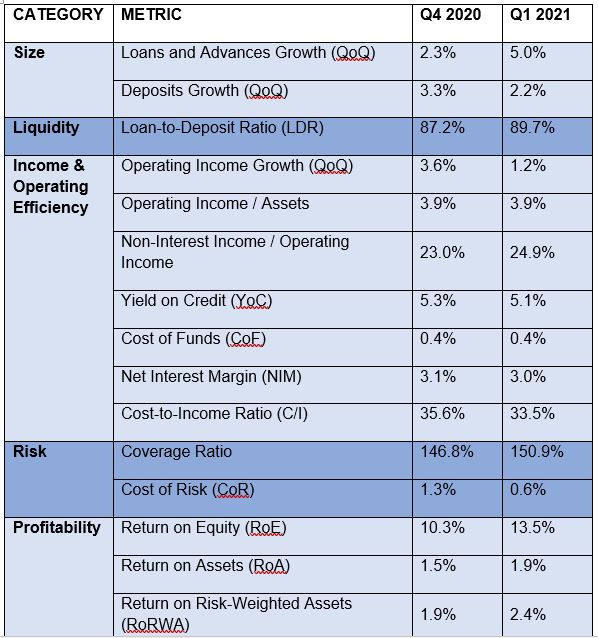 Mr. Ahmed commented: “Looking ahead, credit growth is likely to be driven by continuous strength in mortgage lending and a pick-up in corporate credit demand in H2’21, as the economic activity continues to improve. Corporate lending is expected to gain traction as the Public Investment Fund’s (PIF) plans to invest USD 40billion into the economy annually until 2025, to support business activity. Our outlook on cost of risk remains negative for the near term, as Saudi Central Bank’s loan deferral program comes to an end by H1’21.

‘Furthermore, as the NCB-SAMBA merger comes into effect, other domestic banks could also look to consolidate their position. This is because merged banks have stronger capital bases, know-how and can grab a larger share in major project financing.”

Following the completion of NCB’s and SAMBA’s merger, the top 10 listed banks in A&M’s KSA Banking Pulse universe has been modified to include The Saudi National Bank (the merged entity, SNB) and Bank Aljazira (BJAZ) instead of NCB and SAMBA, as the Pulse tracks the performance of the top ten banks by asset size. Hence, for consistency of comparison, all historical data has been adjusted to include SNB and BJAZ instead of NCB and SAMBA. The Q1’21 results of the new entity apparently include financials of NCB, as a standalone entity, as the merger came into effect in April’21. SAMBA’s and merged entity’s pro-forma financials are not available for Q1’21.

Companies, investors and government entities around the world turn to Alvarez & Marsal (A&M) for leadership, action and results. Privately held since its founding in 1983, A&M is a leading global professional services firm that provides advisory, business performance improvement and turnaround management services. When conventional approaches are not enough to create transformation and drive change, clients seek our deep expertise and ability to deliver practical solutions to their unique problems.

Osaka refreshed and ready after first win since May