The Company posted a 7% rise in gross underwriting profits of $23.75 million, mainly due to growth in gross earned premium from last year, partially offset by increase in net claims incurred primarily due to strengthening of IBNR.

“We are pleased with the first six months of the year and we continue to remain optimistic that barring major catastrophes as occurred in the third Quarter of 2017, we should be able to deliver our planned results for 2018,” said Mr. Wasef Jabsheh, Vice Chairman and Chief Executive Officer of IGIH. 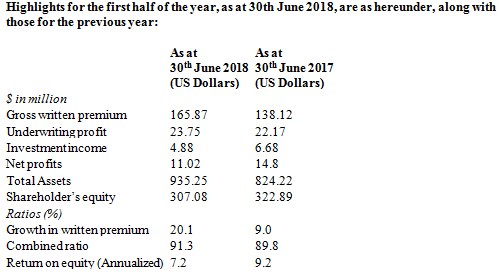 The Board of Directors of IGIH proposed at its meeting of 16 August an interim dividend of US $0.03 per share for the first half of 2018.

International General Insurance Holdings Limited is registered in the Dubai International Financial Centre (DIFC) with operations in Bermuda, Jordan, UAE, Malaysia, Morocco and a wholly owned subsidiary in the U.K.

IGI Bermuda is a class 3B (re)insurer regulated by the Bermuda Monetary Authority (BMA). This subsidiary is the principal underwriting entity for the Group. The Group also has a branch in Labuan, Malaysia, registered as a second-tier offshore reinsurer.

Both IGI Bermuda and IGI UK are rated A- with a stable outlook by Standard & Poor’s and A- (Excellent) with a positive outlook by A.M Best Company.

International General Insurance Holdings Limited had assets in excess of US$ 900 million as at 30th June 2018.