In the fourth of a series on the families of UAE business leaders, Bubbles Kandhari, the wife of Al Dobowi Group chairman Surender Singh Kandhari, talks about the welfare work that the pair undertake at Gurunanak Darbar Dubai

Al Dobowi Group/Handout via Thomson Reuters Zawya
By Mily Chakrabarty, ZAWYA
Every week, the huge, stainless steel kitchen at the Gurunanak Darbar Dubai - the largest Sikh temple in the Middle East – prepares more than 1,000kg of rice, 1,500kg of wheat flour and 300kg of ghee (clarified butter) in order to serve food to the thousands of visitors who flock to the impressive venue.

"The temple's cooking pots are so large that it takes broom-sized spoons to stir the contents," says Bubbles Kandhari, who has been vice-chairperson of the temple since it opened in January 2012.

An average of around 15,000 vegetarian meals (known as Guru ka Langar or community meals) are served up every Friday, which are offered not only to Sikhs, but to visitors of any faith. This number surges to nearly 65,000 during the busy feast of Vaisakhi (the Indian harvest festival celebrated in April) or during public holidays.

That said, as the wife of the chairman of the Al Dobowi Group, Kandhari leverages her extensive business experience to manage such logistical challenges.

The temple is located not far from her husband Surender Singh’s Jebel Ali-based factory, which has been making tyres and technical rubber products for vehicles and machinery for more than four decades, of which she is a director.

Five years ago, Kandhari and her husband, who is also the temple’s chairman, decided it was time to take on an even bigger role among Dubai’s Sikh community.

The first 'official' Sikh temple in the whole of Gulf, it is an enormous responsibility to run Gurunanak Darbar’s cultural and philanthropic activities, given the scale of its operations. 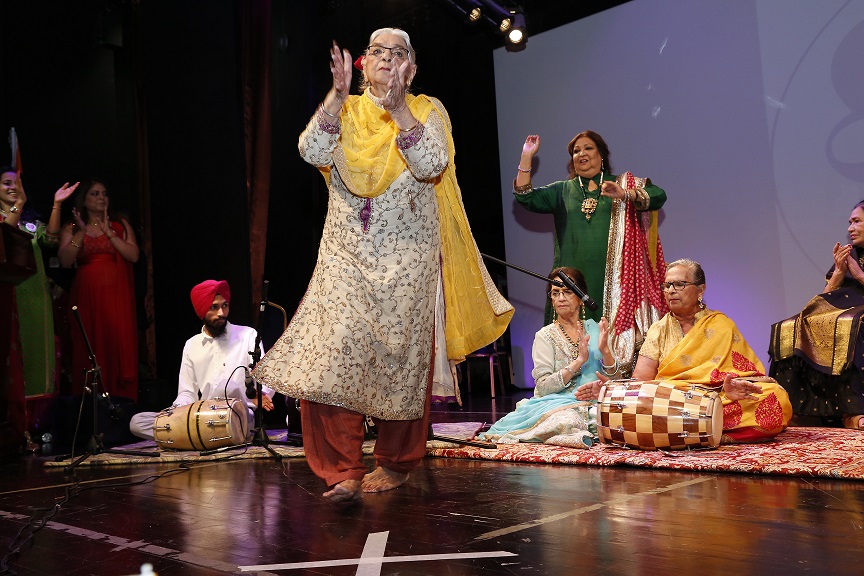 The temple has 35 full-time employees and 250 volunteers who help to organise events during festive occasions, Kandhari says, and it is the first Sikh temple in the world to receive ISO certifications for quality management, environmental management, occupational health and safety management and for food safety management.

"Serving people gives me happiness," says Kandhari during an interview in November 2017 at her residence in the Emirates Hills villa community.

Through her work at the temple, she has initiated several welfare campaigns that have touched the lives of thousands, providing education for underprivileged children and food for the needy. She said that although the Gurudwara is a place of worship for the Sikh community, its doors are open to people of all faiths and free food is served to all visitors.

"I reach the Gurudwara at 9am every morning with my husband and the rest of the day is spent in organising, renovating and implementing new ideas," says Kandhari.

"My role in the Gurudwara is to ensure that everything is running in order and help the people [members of the Sikh community and others visiting the Gurudwara] understand and appreciate each other," says Kandhari.

The temple has also celebrated the spirit of togetherness with various events. In February 2016, the Gurudwara hosted the United Nations World Inter-Faith Harmony Day conference.

Last April, the Gurudwara served breakfast to more than 600 people of 101 nationalities. A new Guinness World Records title was set for the most nationalities having a continental breakfast together. The event was held in line with the UAE’s Year of Giving.

In September 2017, the UN International Day of Peace was also celebrated.

Kandhari also leads and supports a project for elderly people, which provides “a means of addressing the need for the elderly to ease their loneliness by connecting with other people," she says.

"They all share a feeling of brotherhood and they share their happiness and discuss personal problems within the group," says Kandhari.

"We meet once every month and at every meeting, one member shares the story of his or her life with other members. It is a learning experience for the members and even for the young volunteers."

Kandhari and her team of volunteers strive to do something different every month. The group has been on a movie date; visited Dubai Miracle Garden; and attended sessions with visiting doctors who have held discussions on subjects such as diet and nutrition.

“The group has become so popular that I receive calls from a lot of people asking me to lower the qualifying age,” she says.

The group celebrates religious festivals together, including Lori (winter harvest festival), Diwali (Indian festival of lights) and Christmas. Beyond the monthly meetings, volunteers go out to meet elderly members at least once a month. Special events have also been held, including a gala in December 2016 that included a fashion show by group members.

"An elderly member was so excited about being on stage that she fell down but she insisted on getting back on stage for the grand finale," Kandhari says.

"It was fulfilling to know that all of the members were so excited and we all enjoyed putting the show together," recalls Kandhari.

She says that older people have generally given up a lot to raise future generations and so deserve to be looked after.

"We are just trying to give them back a few moments of happiness and peace. If our children are our future, the elderly people are our backbone," she says.

While Kandhari devotes a lot of time to senior citizens, she says that she experiences "soul-fulfilling joy" when interacting with children. A mother of two sons and a grandmother of four grandsons, Kandhari spreads spiritual values among the next generation of Sikhs in the diaspora.

Every Saturday, the Gurudwara organises musical classes for about 80 children aged between five and 15 years. The young ones learn tabla (Indian percussion instrument), harmonium and Gurbani (hymns from Guru Granth Sahib, the holy book of the Sikh community).

"It is very gratifying to watch the seven-year-olds recite some of the hymns," says Kandhari.

Kandhari's future plans are geared towards the development of the Gurudwara.

"The crowd is getting bigger at the Gurudwara with every passing year. We want to keep that going and further innovating our services,” she says.

The 66-year-old humanitarian did not let a multiple ankle fracture sustained in October 2017 slow her down, and she kept up her daily activities with the aid of an automated wheelchair and crutches.

"As long as I physically can, I will devote my life to the Gurudwara and the visitors will find something new each time they visit," she says.

"We must share the good fortune that we enjoy, as I believe that the art of true living lies in the art of giving," she concludes.


Disclaimer: This article is provided for informational purposes only. The content does not provide tax, legal or investment advice or opinion regarding the suitability, value or profitability of any particular security, portfolio or investment strategy. Read our full disclaimer policy here. © ZAWYA 2018

Diriyah Contemporary Art Biennale to open in Riyadh in December

Expo 2020 Dubai to open up new, immersive world for families