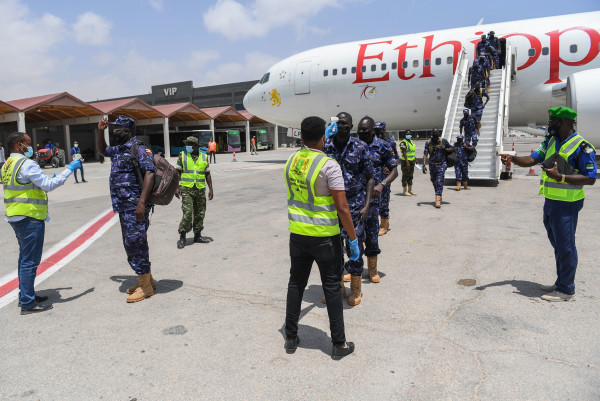 The Uganda Police Force (UPF) has deployed a new contingent of Formed Police Unit (FPU) personnel to serve under the African Union Mission in Somalia (AMISOM).

The contingent arrived in Mogadishu on Tuesday to begin their one-year tour of duty.

During their tour of duty, they will support the advancement of the AMISOM Police mandate, enhancing rule of law and stabilization efforts in Somalia.

Uganda is one of the police contributing countries (PCCs) to AMISOM. Others include Kenya, Nigeria, Sierra Leone, Ghana and Zambia.

The deputy contingent commander, Assistant Superintendent of Police (ASP) Daniel Okello, said they are ready to contribute towards ongoing efforts to restore peace and stability in Somalia.

“We are going to work with colleagues from other police contributing countries to help build the forces of Somalia during the transition period, to help restore peace,” said ASP Okello upon arrival in Mogadishu.

He added, “We must work with a lot of agility and serve with discipline.”

The contingent will join their colleagues from other police contributing countries to support the Somali Police Force (SPF) to secure the ongoing elections.

On arrival in Mogadishu, the new team was received by senior AMISOM Police officers. They will first complete a mandatory two-week quarantine in line with COVID-19 prevention measures.

The AMISOM Police component is made up of the FPUs and Individual Police Officers (IPOs).

Distributed by APO Group on behalf of African Union Mission in Somalia (AMISOM).

UAE President arrives in Muscat; welcomed by Sultan of Oman

US: Nasdaq short interest up 1.3% in mid-September