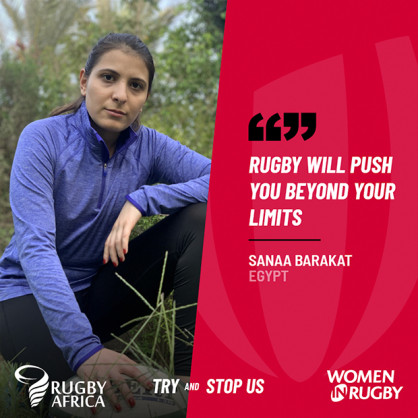 Balancing life, work and the love for the game, Egypt’s rugby player and Rugby Africa’s (RugbyAfrique.com) Unstoppable Sanaa Barakat would have it no other way. Handpicked as one of 12 leading women in rugby on the African continent as part of Rugby Africa’s #Unstoppables, the vibrant young woman is leading the way for others through her die-hard passion for rugby.

Twenty-six -year-old Barakat breathes rugby into everything that she does. Having joined the game in her last year of college, the passionate player is the epitome of having the game define and refine one’s life journey.

“Rugby has been different things to me at different times in my life. At times it has been my greatest success, given me the room to be who I am, explore who I could be, feel safe and loved, feel successful and energised and most importantly feel happy and of worth. At other times it has been my worst enemy, breaking my heart, disappointing me and making me doubt myself. But at the end all that comes to my mind is that rugby has been my home, it has been home since I started playing, and I’m not quite sure how do I go on without it.”

Giving so much to the game, Barakat added that it had brought her the best experiences in her life and created the best stories.

“Rugby has given me the best days of my life. It has given me memories that will forever be engraved in my mind and heart. It changed me, shaped me, broke me and in return it taught me lessons that I would’ve never learnt any other way.”

Holding a full-time job and putting in long hours and weekends to ensure that she continues playing rugby at her best, Barakat said that she understood what love is capable of when she started falling in love with the game.

“With all the hassles I went through to make it work, I knew that rugby helped me prosper and achieve more at work, not the opposite. I knew the moment I slipped at one, I would slip at the other because rugby was never a burden. It was never time wasted because playing rugby is where I recharge to be able to continue. It has been the time to take care of myself, in order to be able to take care of the rest of my responsibilities.”

Bringing in the values of dedication, commitment and hard work, Barakat, who once saw herself as a pessimist who did not believe that dreams could come true, said that she had learnt about life through the game.

“I’ve learnt that passion can make you capable of a lot more than what you think you are capable of. You can never love something so much and not have it love you back; I’ve loved the game and it loved me back. Being in an athletic team is a privilege that not a lot would appreciate until it ends. The game taught me to stay humble because ego only leads to failure. It led me to accept defeat and try to work past it. Success is not measured by the eyes of others, but by your own. My mind could be my worst enemy or my greatest driver. I’ve learned to love even when I don’t like to and give even when I don’t get something in return. I’ve grown a lot from this game.”

Having gained great recognition by being an Unstoppable, Barakat said that it made her feel special. It also made her feel responsible to grow the game and make sure that she continues to give it the effort that she always did, by inspiring younger girls to join the game and pass on her passion.

Hoping to one day graduate to coaching, Barakat said that seeing the growth of the game in Egypt gave her hope for the generations to come. Having a national team competing, participating and winning tournaments shows the promising future that the game holds. She added that the sport had much more awareness throughout the years, on an athletic level, as players know now what is expected from them, what to expect from the game and they see the road of growth for them as athletic individuals in rugby.

Excited by the energy of the young player, Rugby Africa Women’s Manager, Maha Zaoui, said it was exactly the drive and passion that they were proud of and looking to instil in young female players.

“Barakat has defined her ambitions and goals through her love and dedication to the game. We know that sports have many impacts on one’s life and she is proof of what persistence, passion and a drive for the game can do to one’s life journey.”

Africa will also be well represented when South Africa participates in the next rugby World Cup women in New Zealand in 2021 and Kenya in the Olympic Games.

Egypt will speak with Africas voice on climate change: FM