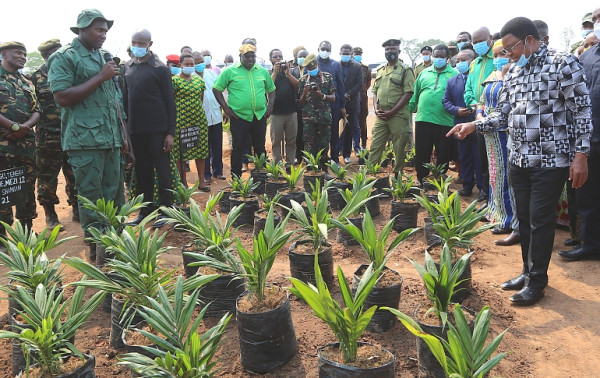 The government has intensified production of palm tree, to halt the importation of edible oil in the country. Annually the government spends over 400bn/- to import cooking oil. Prime Minister Kassim Majaliwa, disclosed this yesterday after inspecting a palm tree farm belonging to the Bulombora National Service (JKT) Camp, as part of his working tour in Kigoma Region.

As such, the PM directed District Commissioners (DCs) and the District Executive Directors (DEDs) in Kigoma Region to effectively coordinate palm tree production in their respective areas. He equally called upon them to manage a database of the farms, which among other things will contain information including the number of farmers, size of the farm and their locations.

According to him, the move will help to ease service delivery with regard to the production of palm tree. "The government is committed to make a close follow up on the production of palm tree from the initial to securing of the seedlings. Parents, establish palm tree farms for your children for their bright futures and economic development... It will help them not to be dependent," noted Mr. Majaliwa.

Likewise, the Premier urged people coming from regions which famously engage in the production of palm trees to increase cultivations to boost their incomes and the country at large. "Invest in palm tree production for your own development and the development of your children," noted the PM. Mr. Majaliwa revealed that the government has recorded great achievements in the production of cash crops including cashewnut, tobacco, cotton, coffee and tea.

Based on the achievement made, the government has also placed emphasis in more crops including palm tree, sisal, grapes and avocado production to be grown in large quantity and boost their value. He applauded the Bulombora National Service Camp for accepting the government call of embarking on palm tree production, pointing out that their farm is setting a good example in the production of the crop.

On his part, the Chief of National Service Brigadier General, Rajabu Mabele noted that the camp is eyeing to grow 2000 acres of palm tree in phases. He pointed out that last year they grew 500 acres and this year they are planning another 500 acres. In 2019, the government set aside 4,3 million U.S. Dollars to boost cultivation of palm oil as part of its strategy to end importation of edible oil. Kigoma region in Tanzania has been resilience in this farming.

A number of strategies have been put in place to enhance more production of palm oil. The government has promised to help the farmers with palm oil seeds, which has become a priority in the agricultural sector. The farmers have been cultivating the crop early from the 1920s as it continues to gain popularity.

Lamborghini presents the Invencible and Autentica: a final and unique farewell

Fish farming becoming ‘crop of the future’ for climate-hit Kenyans