GCC markets were also down, as evidenced by the S&P GCC composite index, which fell 5.0% for November. Weakness in Oil prices derailed the rally of GCC markets barring the UAE, with the Abu Dhabi (8.7%) and Dubai (7.3%) indices remaining resilient due to reforms announced by the government. Saudi Arabia and Qatar equity indices fell 8.1% and 3.2% respectively, as Saudi markets were affected by the sharp cuts in oil prices. Among the GCC blue chip companies, the best performer was Emirates Telecommunications (Etisalat), which gained 24.8% during the month, followed by Abu Dhabi National Energy Company, which gained 14.6%. The rally in Etisalat was triggered by the positive Q3 2021 results in terms of revenue and subscriber base, which led to the company revising its guidance upwards for the full-year 2021.

Rating agency Moody’s stated that the sovereign creditworthiness of GCC countries is expected to be stable in the upcoming 12 to 18 months due to supportive oil prices and higher production. Dubai markets remained resilient despite the turbulence in oil markets as investors were enthused by the recent reforms undertaken by the government. Dubai unveiled plans to list utility company DEWA, which would be one among 10 government entities to be listed in the local stock exchange in the coming months. The move was followed by the decision to overhaul the board of the stock exchange.

Global equity markets, which were already startled by inflation and interest rate hike concerns, had to contend with another negative trigger in the form of a new COVID-19 variant named Omicron, which was labelled by the World Health Organization as a variant of concern at the end of November. The variant was identified in South Africa, and is anticipated to have higher transmissibility. The spread of a new variant has been met with caution by several countries, as it could result in public health measures that could potentially have a negative effect on economic growth. As a result, the MSCI World and S&P 500 (U.S.) indices lost 2.3% and 0.8%, respectively for the month. Earlier during the month, U.S. President Joe Biden nominated Jerome Powell for a second term as Chair of the U.S. Federal Reserve. Emerging market equities (MSCI EM index) fell by 4.1% while China remained flat for the month. Escalating tensions between the U.S. and China over the status of Taiwan and trade disputes remain a cause for concern.

Oil prices witnessed its worst monthly decline in over a year to close at USD 70.6 per barrel due to simultaneous pressure from both the supply and demand side. Brent crude registered its highest monthly decline in over a year, falling 16.4% in November. Negative triggers in the demand side included the spread of a new COVID-19 variant, which could affect economic growth. On the supply side, U.S. President Joe Biden announced that the U.S. would release oil from their Strategic Petroleum Reserve to try to reduce gasoline prices, which have been a key driver of inflation in the country. The market now expects OPEC+ members to reduce production further to compensate for the excess supply in the market. 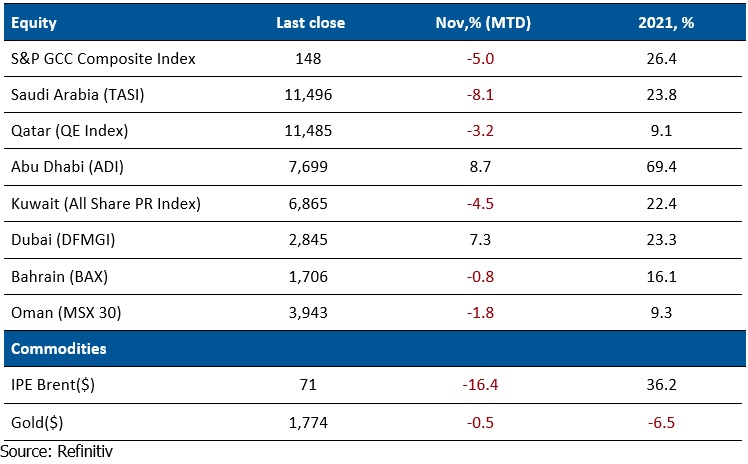 Established in 1974, Kuwait Financial Centre K.P.S.C “Markaz” is one of the leading asset management and investment banking institutions in the MENA region with total assets under management of over KD 1,053 million as of 30 September 2021 (USD 3.49 billion). Markaz was listed on the Boursa Kuwait in 1997.