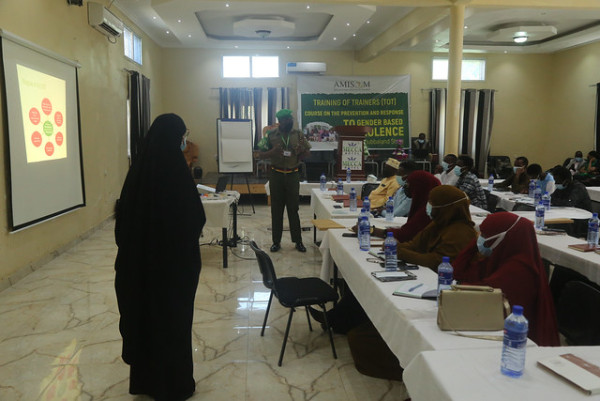 Twenty-seven Jubaland State officials have completed a five-day training held in Kismayo on the protection of civilians and the prevention of sexual and gender-based violence, and conflict-related sexual violence.

“We are aware that within a given time, AMISOM will leave this country. What we want is for the Somali people to have knowledge, skills and the responsibility to protect vulnerable members of their communities, including women, children and the elderly,” said Gloria Jaase, Protection Officer, at the African Union Mission in Somalia (AMISOM), who organised the training.

Jaase stated that such trainings are aimed at building a critical mass of skilled trainers to support efforts to protect civilians and promote peace in the long-term.

“The participants included women and men that AMISOM has trained in the past. We are equipping them with skills to enable them to train other people in Somalia,” she added.

The AMISOM Human Rights Officer in Jubaland, Inspector of Police (IP) Joshua Samuel, said the transfer of skills was important if the goal of preventing sexual and gender-based violence and conflict-related sexual violence was to be achieved.

“We have trained these 27 officials, who in turn will be able to conduct similar training on their own to members of their communities,” he noted.

This sentiment was echoed by Layla Omar Muse, a participant, who stated that she now had the knowledge and capacity to train others on the important topics of protection of civilians, respect of human rights, and prevention of conflict-related sexual violence.

Distributed by APO Group on behalf of African Union Mission in Somalia.