UAE's Gargash Enterprises sold 4,000 units of Mercdes passenger cars in the first half of 2015.


Press Release
16 August 2015
Dubai - Gargash Enterprises sold an outstanding number of approximately 4,000 units of Passenger Cars in the first half of 2015, recording a 15% increase compared to the same period last year and a 16% increase in the AMG segment.

Gargash Enterprises General Manager Karl-Johan Sandesjo expressed, "We are pleased to see double-digit growth figures in the first half of 2015, as we had envisioned and hope to keep the momentum going. Keeping our focus on customer satisfaction has helped us attain the support and loyalty of our customers, thereby achieving organizational goals.

"There are various other key drivers that also lead to the enhanced figures which include the launch of the 3 new models; CLA, GLA and AMG GT," he added. The trend-setting iconoclast, all-new CLA has already won over the hearts of young luxury buyers with its distinct looks and modern features, while the GLA proved to be a perfect fit in the cross-over segment, with incredible style and grace not compromising on the qualities of an SUV. Undoubtedly, the new AMG GT wooed the audience right from the day it was unveiled at the AMG Performance Tour, with its unbelievable capabilities and unmatched performance.

The flagship model, the elegant S-Class that won the "Middle East Car Of The Year" award, still continues to appeal to customers with a discerning taste. With the "0% finance rate over 5 years" campaign, this ultra-luxurious model attracted a large number of customers, contributing to the overall rise in sales. In addition, the unique Star Program offering incredible payment flexibility that is exclusively offered by Gargash Enterprises also continues to draw interest towards the brand.

Defining 2015 to be the year of the SUV, lined up to be launched later this year are 3 new models; the GLE Coupé, GLE and GLC which are expected to stir the automotive market living up to the brand's philosophy. The all-new GLE Coupé has already received great publicity and appreciation since its debut in the recent science fiction adventure film 'Jurassic World'. Whereas, the GLE is a facelift of the ML and the GLC is a successor of the GLK; both models have been enhanced with latest technology and modern features to match customers' expectations. With this Gargash pushes the limits of SUV to greater heights emphasizing on Mercedes-Benz being the brand that's always reinventing.

Gargash Enterprises is positive of further growth in 2015 and continues to serve its customers with the latest technology, feeding their appetite for innovation. By earning the loyalty of its customers, Gargash is committed to provide excellent customer experience and service standards that are unparalleled in the industry. 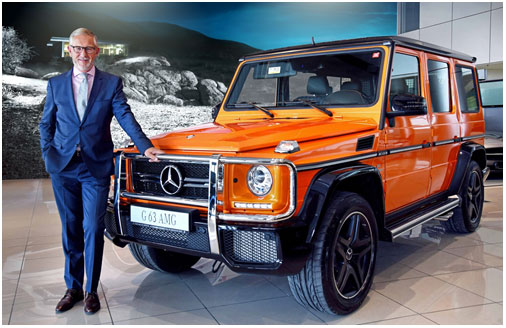 Dubai Tourism to hotels: Comply with sustainability requirements by July 1