al khalij Commercial Bank(al khaliji) Q.S.C, in Qatar, announced its financial results for the third quarter of 2015, reporting a Net Profit of QAR 164.4 million. This represents an increase of 13% over the same quarter of last year. The Net Profit for the first nine months of this year stood at QAR 466.8 million compared to QAR 404.7 million generated during the first nine months of 2014.

"I am very pleased to report record results in the third quarter of this year. These results clearly demonstrate the earnings power of al khaliji and the strength of our diversified business model, with the right mix of wholesale, treasury and personal .Overall, we are extremely pleased with the strong momentum in Qatari Banking, and are also proud that these results were achieved while simultaneously reaching new heights in customer loyalty measures".

"al khaliji's performance during Quarter 3 demonstrates the underlying strength of our business. Year to date Profits of QAR 467m are 15% higher than the same period last year. Our core franchises, of Corporate and HNW Personal Banking, delivered double- digit growth year-on-year in our loan book and deposit base. Our efficiency ratio at 35.4% continues to decrease and reflects ongoing prudent cost control combined with increasing revenues. We continue to focus on diversifying and improving the quality of our funding sources and have made much progress in this regard. The bank is well capitalized, with a CAR of 14.7%, and will continue to maintain strong levels to support future growth plans. We expect this positive business momentum to continue for the remainder of the year and are well placed to achieve our financial targets for 2015."

The bank's capital adequacy ratio was 14.7% as per Basel III. 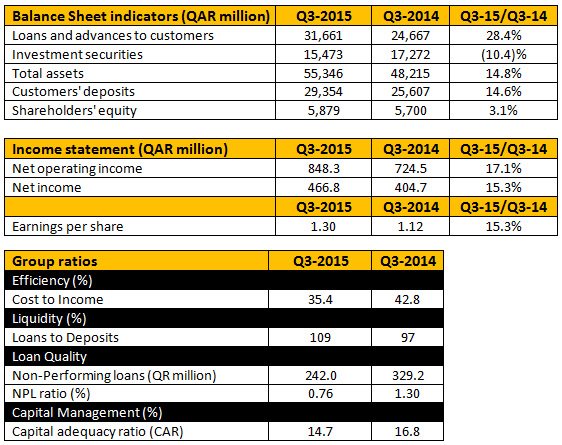