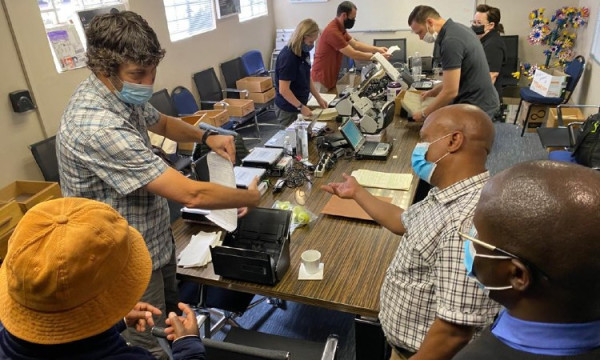 The United States Embassy in Maseru hosted a team of law enforcement agents from the Federal Bureau of Investigation’s (FBI) Criminal Justice Information Services (CJIS) to conduct the first phase of a potential multi-year project to create the Kingdom of Lesotho’s first national criminal fingerprint database.

At the request of the Lesotho Mounted Police Service to help address some of the country’s most critical national security priorities, the CJIS agents scanned and digitized nearly 70,000 criminal fingerprint records, some dating back as far as the 1960s, to begin the first phase of the database system. Future activities will include an assessment of Lesotho’s forensic lab, the signing of a Memorandum of Cooperation, and additional skills training, all moving toward the goal of standing up a modernized digital database.

The increased collaboration between Lesotho’s law enforcement agencies and their U.S. counterparts in the creation of the fingerprint database is a meaningful step forward in significantly advancing Lesotho’s border security priorities by providing the skills and equipment necessary to better identify threats to Lesotho’s national security and aid the country in solving other violent crimes.

Last week’s FBI visit kicked off a series of skills-sharing activities focused on technological and investigation best practices as part of a broadened law enforcement partnership between the United States and the Kingdom of Lesotho. A Diplomatic Security Service visit is planned for later this year to support increased collaboration on human trafficking in Lesotho and Southern Africa. In early 2022, a Naval Criminal Investigative Service team will visit Lesotho to train government and law enforcement agencies on investigation techniques.

Distributed by APO Group on behalf of U.S. Embassy in Lesotho.