Zawya Express presents the top story, topic or trend highlighted by our editorial team as recommended reading to start your working day

Gold has typically been seen as a safe haven by risk-averse investors, but as the United States threatens to enter into a full-scale global trade war with Europe and China, the precious metal’s price continues to fall, leaving some analysts asking if it has lost its traditional lustre.

Gold prices declined more than 1 percent to hit its lowest point in a year on Tuesday. According to data from Thomson Reuters Eikon, the spot gold price has dropped 5.78 percent so far this year, down from $1,302.45 on December 31 to $1,227.12 yesterday.

The yellow metal is usually inversely linked to the performance of the U.S. dollar, which has strengthened after the U.S. Federal Reserve chairman Jerome Powell gave an upbeat outlook for the U.S. economy.

Reuters reported that markets are expecting two more interest rate increases this year, on the back of the positive U.S. economic indicators. Higher interest rates make gold more expensive to own as it does not yield any interest or dividends and costs money to store and insure. At the same time, as gold is priced in dollars, a rising American currency makes the metal more expensive for non-U.S. investors.

American investors selling
However, it is not just non-U.S. investors who are losing their appetite for gold. “U.S. investors have been selling gold, as indicated by outflows from U.S.-listed physically backed gold products, our preferred gauge of investment demand,” Carsten Menke, commodity research analyst at Swiss bank Julius Baer, told Zawya in an email interview on Tuesday.

“We believe the reasons for this selling are two-fold: First… there is little incentive for U.S. investors to hold gold at a time when the dollar is rebounding and interest rates are rising. Second, there seems to be a different perception about the trade tensions and the risk of an escalation into a trade war. From the perspective of a U.S. investor, focused on the domestic economy and market, the perceived threat from trade tensions is much lower than in Europe,” he added.

China troubles
While the U.S. economy has had good news, its trade war rival China was dealt a blow following recent reports its economy grew at its slowest pace since 2016 during the second quarter of 2018.

"If China is slowing down, there will be consequences to global commodity consumption and that's going to drag gold down as well," Richard Xu, a fund manager at China's biggest gold exchange-traded fund, HuaAn Gold, told Reuters.

"Chinese gold ETF liquidity has dropped a lot these days so that means people do not see any major breakthrough in either direction," Xu added. Reuters also reported that demand for gold among consumers has also weakened.

In the immediate short-term, the outcome of the current war of words between China and the U.S. will be vital to gold’s price going forward. “If global trade tensions reach new heights, market players will be closely monitoring to see whether the yellow metal has the ability to regain its safe-haven status. However, market expectations over the Federal Reserve raising US interest rates two more times this year are likely to spell more trouble for zero-yielding gold,” Lukman Otunuga, a research analyst at London-based currency brokerage FXTM, told Zawya in an email interview.

“A full-blown trade war that threatens to destabilise global growth and stability could spark a wave of risk aversion across financial markets. The aggressive flight to safety in such an event has the ability to exponentially increase appetite for safe-haven assets such as gold,” he added.

Good time for Dubai bargain hunters
While the news at the moment may not be easy reading for gold investors, for gold retailers and consumers it means there are bargains to be had.

“The decline in gold prices has triggered an increase in sales of gold jewellery…. We have witnessed an average of 20 percent sales growth in the past couple of weeks,” Karim Merchant, group CEO and managing director of Pure Gold Group, the Dubai-based retailer which owns 150 stores in the Middle East and Asia and recently opened seven new jewellery concept stores in the United Arab Emirates, Kuwait and Oman, told Zawya in an email interview.

Merchant said consumers in Dubai and the wider Gulf see gold as a way to preserve and accentuate their wealth: “Gold is not just valuable as a hedge fund and a safe haven investment; gold, both the colour and the precious metal, is a symbol of opulence in China and India.”

“The recent rise in the Federal interest rate, global financial status and political instability are key factors that has a huge influence on the prices of gold. Investors may feel encouraged to buy gold when they believe the value of their paper money will decline. The prices are set at a global level and the factors are not specifically linked to Middle East,” he added.

Seasonal slumps
In the medium-term, some analysts believe the fall is price is simply seasonal and the precious metal will recover as the year progresses. “The well observed phenomenon of gold’s seasonal price changes shows summer is the best time to buy the yellow metal. Typically ,the gold price falls lower during late spring and early summer, before rising almost 4-5 percent throughout August, September and October,” according to a report issued by Dubai-based Century Financial Brokers earlier this week.

“The main reason for the positive seasonal gold price performance between early August to late February are various festivities, including the Indian wedding season, Christmas and the Chinese new year celebrations. Jewellery makers and merchants tend to stock up on gold prior to the festivities, and tend to push up gold prices in the process,” the report added.

Looking further down the line, Julius Baer’s Menke said it is still all to play for gold investors: “With the U.S. dollar expected to roll over later this year and upside pressure to bond yields easing, medium to longer-term buying opportunities should open up. Sustainable upside should materialise once growth and inflation concerns creep into financial markets, reviving the investors’ demand for gold as a safe-haven.

“An escalation of today’s trade tensions into a fully-fledged trade war, accompanied by a slowing economy and rising inflation would be very bullish for gold, likely prompting some U.S. investors to reverse their assessment and reconsider gold within the portfolio,” he added.

When asked whether investors were turning their back on gold and if the precious metal had begun to lose its allure, Menke believes the metal still has a golden future ahead fo it: “No, we do not think so. Given gold’s history and track record as a safe-haven it would be a very bold statement to say it is has lost its allure,” he said.

Graph below: Spot gold appears to be oversold, according to the Relative Strength Index (RSI 14). The index is a measurement between zero and 100. Traditionally the RSI is considered overbought when above 70 and oversold when below 30. Spot gold had an RSI of 26.851 on Tuesday’s close. Click on the image below to open a high-resolution version in a new tab (Source: Thomson Reuters Eikon). 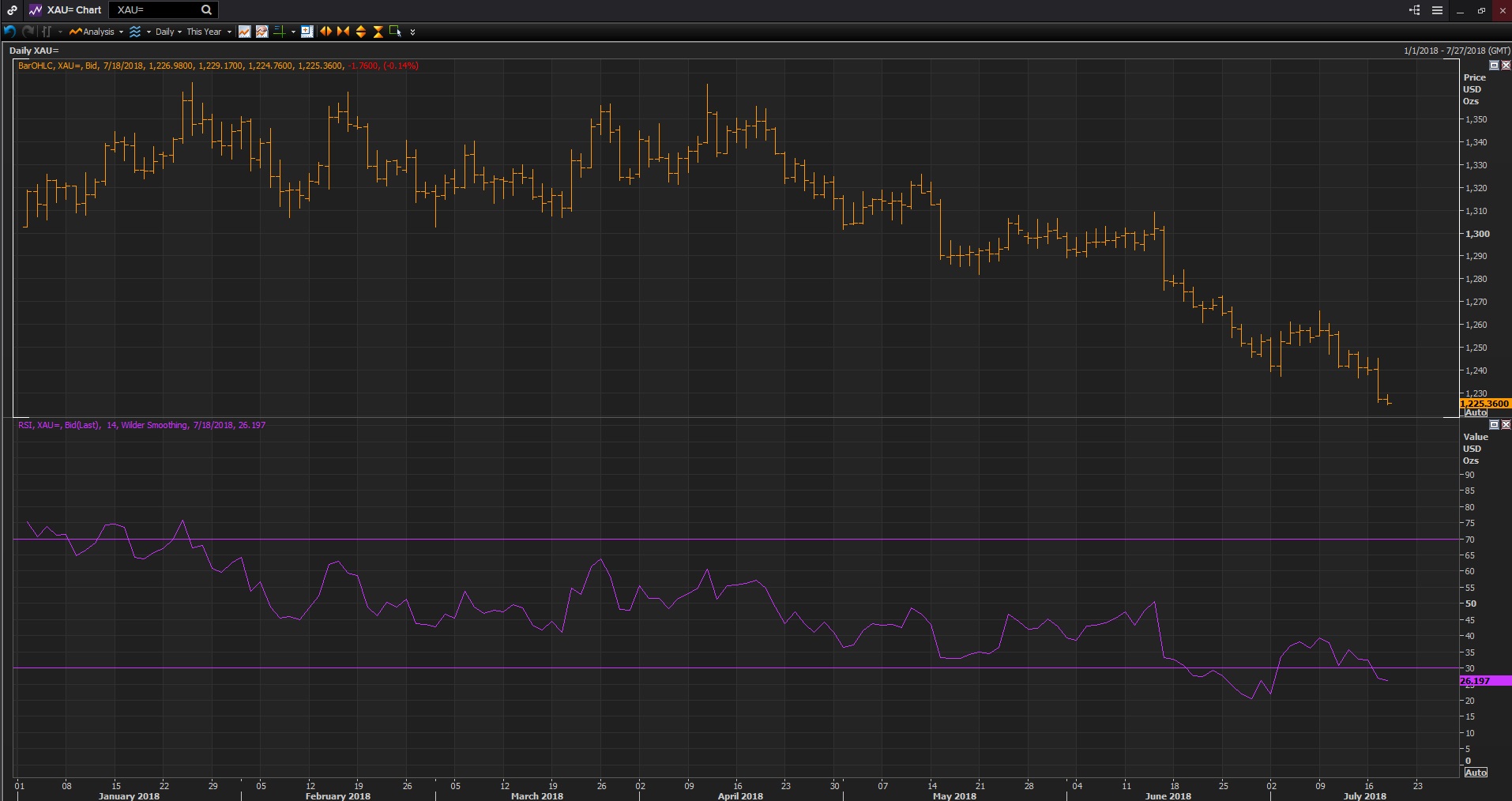 Graph below: Price of spot gold over the last week. Click on the image below to open a high-resolution version in a new tab (Source: Thomson Reuters Eikon). 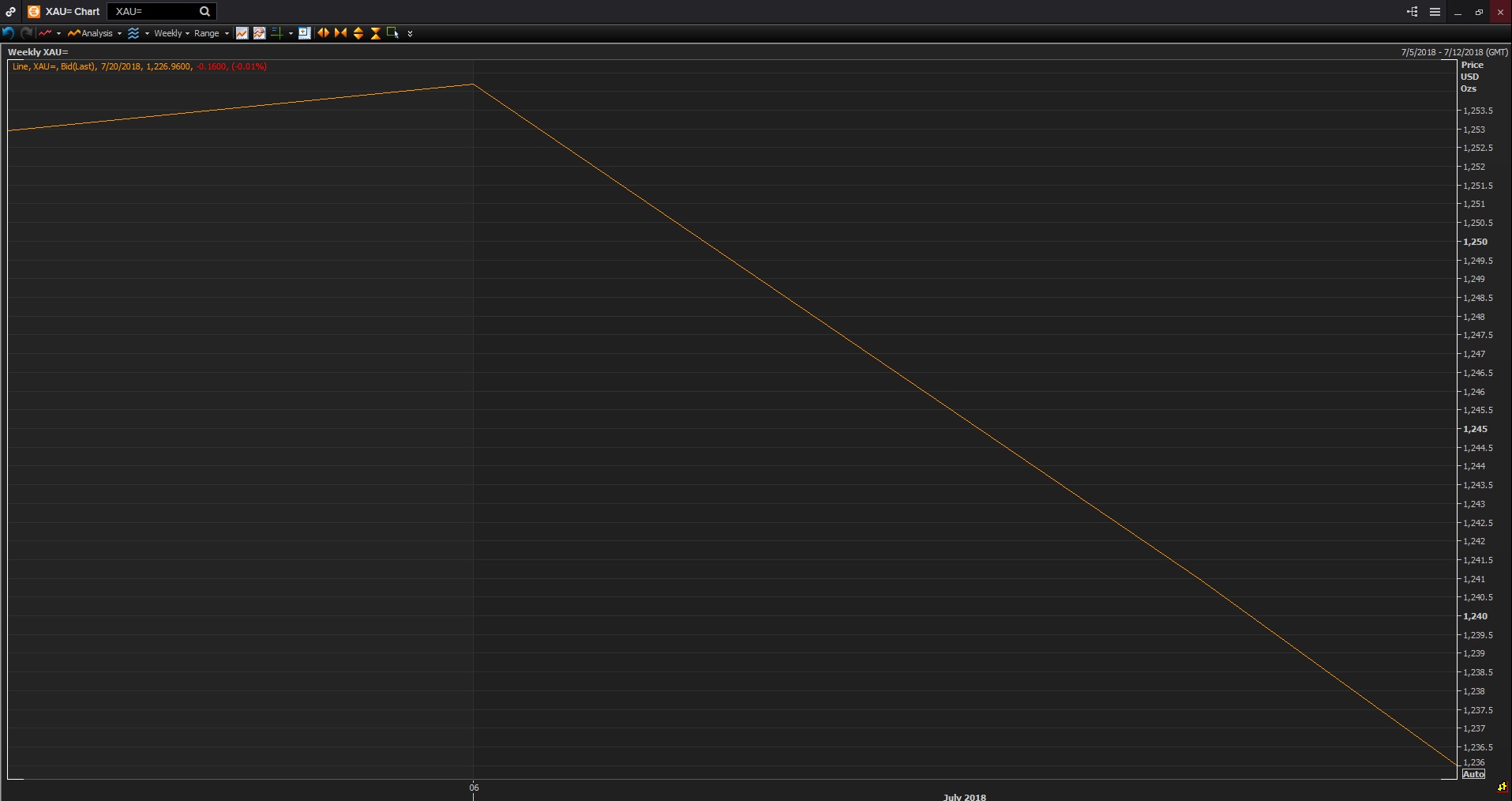 Graph below: Price of spot gold year to date. Click on the image below to open a high-resolution version in a new tab (Source: Thomson Reuters Eikon). 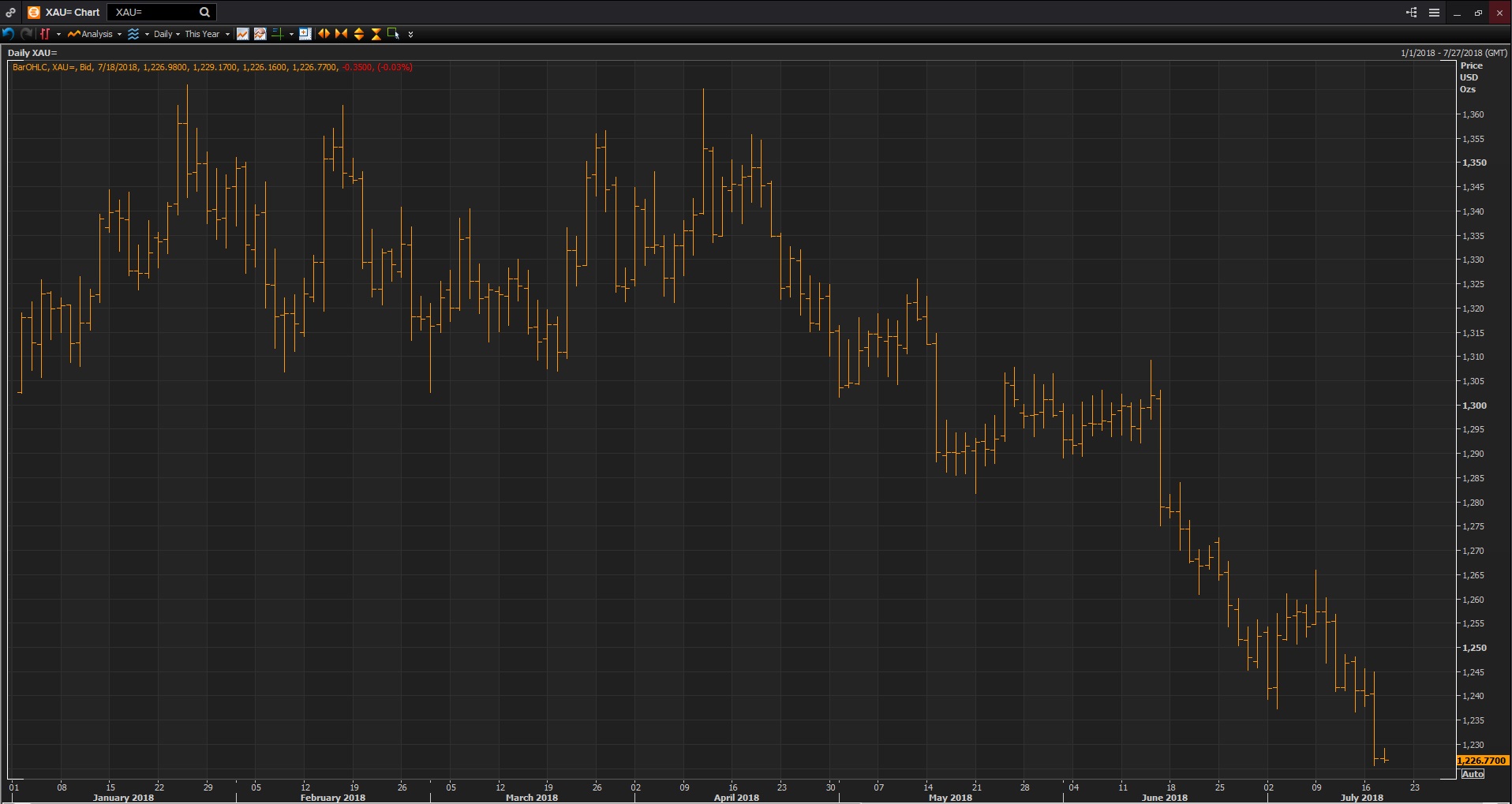