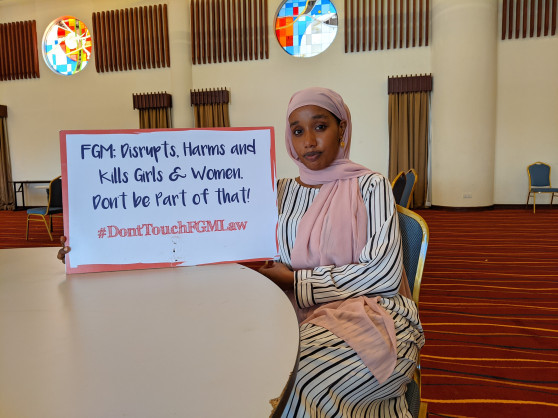 Leading women’s rights organization, Equality Now (www.EqualityNow.org), has called on Kenya’s President and Chairperson of the East African Community, Uhuru Kenyatta, and Ghana’s President Nana Addo Dankwa Akufo-Addo, who chairs the Economic Community of West African States to marshal their peers into prioritizing efforts to end the practice of Female Genital Mutilation (FGM) across borders within their specific regions.

Through a press statement that was issued at the end of 16 Days of Activism on Friday December 10, Equality Now’s Director Africa Office, Faiza Mohamed, observed that cross-border FGM was widespread in East and West Africa where lack of regional monitoring and data mechanisms on the cross-border practice remains.

She pointed out that there was need for high level political commitment from all the Heads of State and Government in East and West Africa in order to collaboratively address cross-border FGM by taking concrete and holistic solutions that would include the prosecution of cases, urging Presidents Akufo-Addo and Kenyatta to steer this process.

Ms. Mohamed added that porous borders, humanitarian crises, political instability, weak administrative structures, lack of laws prohibiting FGM, poor implementation of these laws where they exist and ineffective coordination among law enforcement agents between neighboring countries in the Regional Economic Communities were some of the leading drivers of cross-border FGM in Africa.

“Efforts to end FGM among Member States of the Regional Economic Communities through legislation have not been harmonized. In addition, communities that live at border points share common cultures and customs. This makes it easy for them to move across borders for purposes of FGM and especially in situations where FGM is prohibited in their native country.

We are therefore urging President Akufo-Addo and President Kenyatta to prioritize and include efforts of ending cross-border FGM into the agenda of their specific Regional Economic Communities and in line with the Saleema Initiative that the African Union launched in 2019,” said Ms. Mohamed.

In West Africa, cross-border FGM is rampant in Burkina Faso and Mali, Burkina Faso and Cote D’Ivoire, Mauritania and Senegal, Sierra Leone, Liberia and Guinea. In East Africa, Kenya has witnessed cross-border FGM where girls, women and cutters are taken to Uganda, Tanzania, Ethiopia and Somalia to commit this human rights abuse, as perpetrators attempt to circumvent the laws and systems that have been put in place to end FGM. There have also been instances where women and girls from other nationalities have been transported into Kenya for the cut.

Ms. Mohamed further noted that Kenya has demonstrated the political will needed to galvanize action towards ending FGM, further imploring upon President Kenyatta to apply the same dedication and spirit that he had demonstrated towards ending FGM in Kenya to the entire East African Community. In November 2019, Kenya made a national commitment to end FGM by 2022 – eight years ahead of the 2030 global commitment to eliminate this harmful practice.

She also reminded Presidents Kenyatta and Akufo-Addo that they bore the responsibility of holding their peers to account whilst also living up to the aspirations of the Protocol to the African Charter on Human and Peoples’ Rights on the Rights of Women in Africa.

“Laws touching on cross-border FGM across neighboring countries vary, while some countries do not have laws at all. In addition, only Guinea-Bissau, Kenya and Uganda address cross-border FGM in their national laws. Ending FGM therefore needs  political commitment to drive comprehensive solutions that include education on the rights of women and girls together with community engagement around changing cultural and social norms,” added Ms. Mohamed.

Distributed by APO Group on behalf of Equality Now.

Editor’s notes:
Cross-border FGM entails the movement of women, girls and traditional practitioners across national borders for the purpose of FGM.

In February 2019, the Government of Burkina Faso and the African Union launched a continental initiative to end FGM dubbed, “Saleema Initiative.” The Saleema Initiative is designed to galvanize political action to accelerate the elimination of FGM and is spearheaded by H.E. Roch Marc Christian Kaboré, President of the Republic of Burkina Faso, designated African Union Champion on Eliminating Female Genital Mutilation by the 32nd Ordinary Session of the Assembly of African Union Heads of State and Government. The initiative is anchored on the African Union Plan of Action 2019-2023. Its main focus is to end medicalization of FGM and addressing cross-border practice of FGM.

About Equality Now:
Equality Now is an international non-governmental, human rights organization that was founded in 1992 to advance the rights of women and girls across the world. The organization holds governments responsible for ending legal inequality, trafficking for sexual exploitation, sexual violence and harmful practices, such as Female Genital Mutilation (FGM) and "child marriage". While working through various projects, Equality Now champions for legal and systemic change by setting important legal precedents and exposing barriers that hinder women’s access to justice.