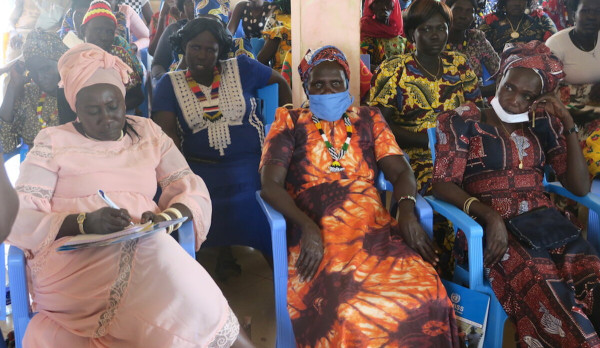 A two-day advocacy forum on women, peace and security has concluded in Kuajok, with discussions having focused on ways to influence and achieve women’s effective participation in governance and the country’s peace process.

Some 60 women from the counties of Gokrial East, Gokrial West, Twic, Tonj North, Tonj South and Tonj East voiced their multiple demands at the event and were supported by a successful “sister”, Amiir Amet Kuol, Warrap State Minister of Trade and Industry.

"We must unite, irrespective of social or political background, as women of Warrap State to fight gender inequality and exploitation. Gender equality is a human rights issue, and it is in the interest of all of us: men and boys, women and girls. Discrimination against women harms us all," she said.

Traditional cultural practices were cited as curtailing women’s opportunities and participation in leadership, leading to females having less education, being poorer and having less access to resources and capacity building.

“Some women don’t have self-confidence. They may be willing to participate in leadership, but they are not 100 per cent sure that they are welcome to express their feelings and opinions,” she said.

Ajok Majok Kuel, on the other hand, stressed the importance of women playing a substantial part in South Sudan’s ongoing peace process.

“What we are interested in as women is peace. We are not fighting but when our children are killed, we feel as if we are the ones who died,” she said, citing the heavy toll conflict takes on women and children.

In the country’s revitalized peace agreement, signed in Addis Ababa in September 2018, women have, in theory, been guaranteed at least 35 per cent political representation at all levels of governance. This stipulation is yet to be fully implemented.

On her part, Anastasie Nyirigira Mukangarambe, Head of the UN peacekeeping mission’s Field Office in Kuajok, called on women and men alike to build networks for promoting equal rights and opportunities.

“I have seen, met and befriended really strong women. They are passionate, committed and qualified to hold positions in government and be real leaders as well as influencers. It is a fact that political and peacebuilding processes are more durable and successful when women are fully involved,” she stated.