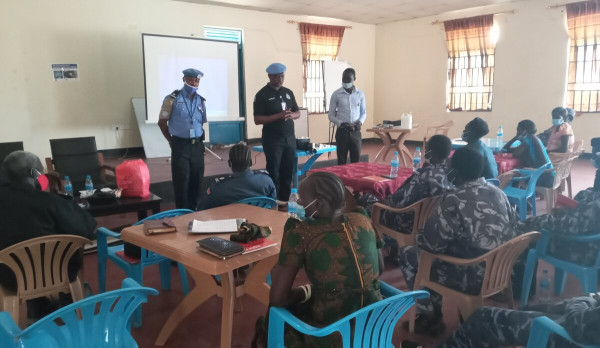 The theme of this training session—preventing sexual abuse and exploitation among communities.

“As a state, Jonglei is spread over a large area,” adds Colonel Alou. “The size itself, coupled with the difficult terrain makes it impossible for us to record every single case. But we are aware that women and young girls are suffering because of this and it is incumbent upon us to do our best and tackle this scourge head on.”

Another factor that is seen by local police as contributing to such issues is the continuous displacement of people from Jonglei into Bor town. Displaced people lack the social protection and support afforded by their original settlements. They are therefore frequently a target of sexually motivated crimes.

Displacement has its roots not only in natural calamities such as floods but also a marked increase in intercommunal conflict as well as criminality in the greater Jonglei region.

The other important factor highlighted by Colonel Alou are cultural and traditional beliefs that influence survivors of sexual violence to not report the crimes committed against them.

“This is a major hindrance to law enforcement personnel, coupled with the fact that majority of South Sudanese are completely ignorant of the protections they are entitled to under our nation’s laws,” remarked the Colonel.

Bernard Norgah, one of the UNPOL officers, facilitating the workshop revealed that participants were taken through rule of law and human rights practices that uphold the rights of citizens who come to them for help or those they arrest. They also learned about how these are violated by perpetrators.

“We led them through these subjects so that they have a better understanding of the factors that lead to sexual exploitation and abuse.”

He confirmed that the practice seems to be rampant in the communities. “We hear of these cases on our patrols all the time. But people are reluctant to report them. So, when women police officers are fully aware of their responsibilities and carry the message to the communities, we will, hopefully, be able to easily apprehend those who carry out such acts,” Bernard explained.

Participants said they found the sessions to be illuminating and helpful.

“We have been empowered by the workshop and hope to be able to spread the knowledge we have gained among our communities and build their trust in us as police officers. Perhaps, this will be the start of a breakthrough for women and girls to report more judiciously on any sexual crime or abuse that they have been subjected to and we can make progress in preventing such occurrences,” said Major Akur Ayom from the Police Social Welfare Unit in Bor.

“Most cases are never reported to the police until someone gets pregnant or health problems crop up. By then, the perpetrators might have left the area and as police officers, we are helpless in meting out any justice for survivors. I hope we will be able to change this mindset,” she added.