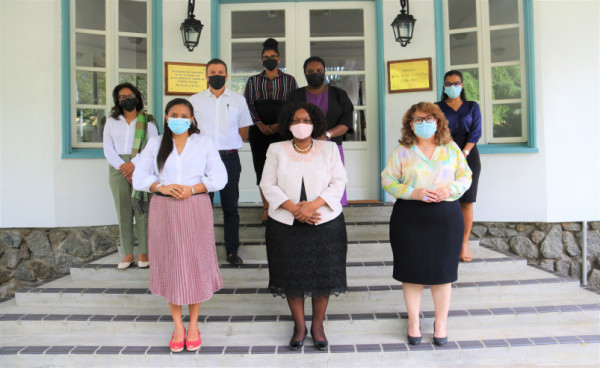 On the occasion of her accreditation to the Republic of Seychelles, H.E. Dr Hlamalani Nelly Manzini, High Commissioner of the Republic of South Africa, paid a courtesy call on the Principal Secretary of the Foreign Affairs Department, Ambassador Vivianne Fock Tave, on Monday 28th February 2022, at Maison Quéau de Quinssy. Accompanying Ambassador Fock Tave was the Principal Secretary for Tourism, Mrs Sherin Francis, and senior officials of the Foreign Affairs Department.

Seychelles and South Africa have shared good bilateral and multilateral relations throughout the years. As member states of the Southern African Development Community (SADC), Ambassador Fock Tave expressed the government’s gratitude for the South African government’s support to Seychelles, describing South Africa as a critical partner. They briefly spoke of certain concerning regional security developments, which affect the whole region and the actions undertaken aim to reinforce the unity and fraternity that bind the area together.

The delegates discussed matters of cooperation and mutual interest for both countries. Amongst which was the tourism sector whereby the Principal Secretary for Tourism, Mrs Sherin Francis, acknowledged South Africa as a key secondary touristic market for Seychelles. Mrs Francis described her exchanges with her counterpart in South Africa as excellent. With the continued transformation of the tourism sector, both parties agreed that South Africa and Seychelles should explore new touristic avenues.

Other areas addressed were to re-initiate collaboration in the health sector, training opportunities for Seychellois athletes, and the importance of strengthening maritime security in the Indian Ocean.

Both countries’ economy has not been spared by the effects of Covid-19, with the aim of responding effectively in the eventuality of a pandemic the diplomats emphasised on having open dialogues to share each other’s knowledge and experiences.

Dr Manzini was also accompanied by Mrs Biswanee Poongavanan, Political Secretary in the High Commission of South Africa and Mr Rod Thorrington, Honorary Consul of the Republic of South Africa.