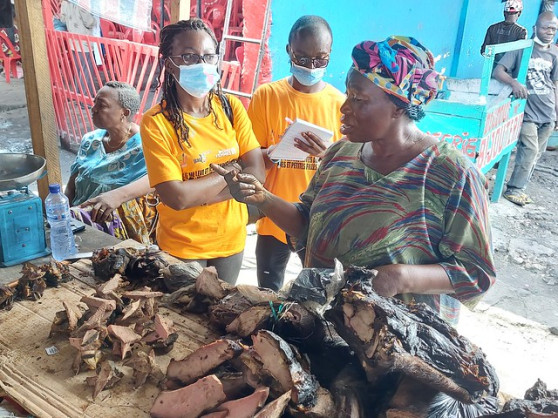 For the 16 Days of Activism against Gender-Based Violence, women entrepreneurs from different economic sectors operating in the formal and informal sectors, decided to mobilize and denounce the violence they suffer and which, unfortunately, often goes unnoticed. Thus, on December 9, 2021, International Anti-Corruption Day, they took over nine markets in Kinshasa, the capital of the Democratic Republic of Congo, to raise public awareness on this issue.

UN Women is already committed to improving the business climate for Congolese women entrepreneurs through the Support to Micro, Small and Medium Enterprises (PADMPME) project: "Women entrepreneurs and traders suffer daily from violence that remains unspoken. There is no mechanism to protect these women, especially since most of them are in the informal sector. It is important to listen to them and to advocate so that the conditions of their activities can be improved," said Awa Ndiaye Seck, UN Women Representative in the DRC. This initiative is timely, as the challenges are numerous.

Lusamba Nsana, a bean seller at the Zigida market, complains about the many constraints faced by women traders, especially the lack of clarity about the payment of various taxes. "Certainly, some taxes are normal, but others are not, and this disturbs us a lot," she explains. She adds that some collectors have a discourteous and aggressive attitude when they come to claim the taxes. "They insult sellers and disrespect them. And when traders tell them that they have not yet sold and ask them to come back, these collectors violently confiscate their goods" she complains. In addition to the plea for clarification on the nature and amount of taxes to be paid, Lusamba also asks that the authorities ensure the sanitation of the markets.

This sensitization is a first step towards the establishment of an advocacy mechanism on the improvement of the business climate, the search for economic solutions, and the promotion of female entrepreneurship. The facilitators also collected the opinions of women traders to include them in the advocacy for the creation of market access opportunities such as AGOA (African Growth and Opportunity Act), and ZLECAF (African Continental Free Trade Area). In the coming days, the networks of women entrepreneurs who participated in this awareness: RENAFER (National Network of Rural Women's Associations), FEFCO (Congolese Women's Entrepreneurship Forum), CNFE (National Commission of Women Entrepreneurs of the Federation of Enterprises of Congo), RAF (Réseau Action Femme), ROFAKIN (Regroupement des ONG et Associations des Femmes de Kinshasa), NCCN RDC (New National Chamber of Commerce), COLETCO (Collectif des Entrepreneurs Transformateurs du Congo), AFEECO (Association des Femmes Entrepreneurs du Congo), COPEMECO (Confédération des Petites et Moyennes Entreprises), MUFFA (Mutuelle Financière des Femmes Africaines) and LHAAPS will submit a memorandum containing the elements collected during the sensitization to the competent authorities.

This action was supported by UN Women and its project of Reform and Dissemination of laws favorable to women's entrepreneurship within the project of Support to the Development of Micro, Small and Medium Enterprises (PADMPME) born from a partnership between the government of the DRC and the World Bank.

Distributed by APO Group on behalf of UN Women - Africa.