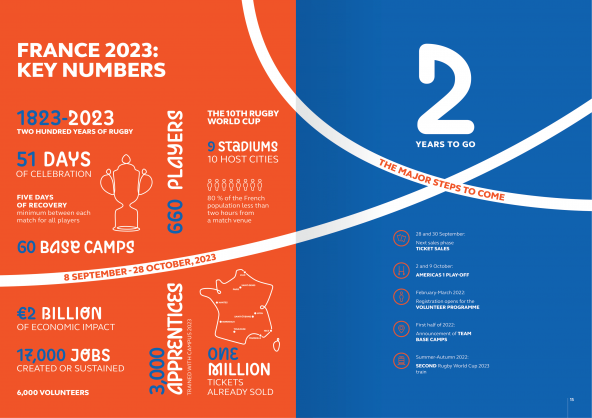 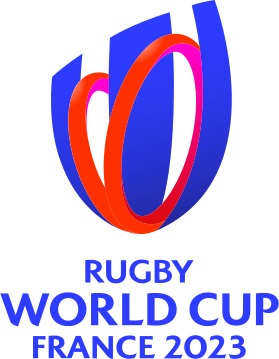 With two years to go until Rugby World Cup 2023 (www.WorldRugby.org) kicks off in France, preparations are on track to deliver a spectacular and transformational event that has players, fans and France at heart.

Action will kick-off on 8 September, 2023 when hosts France take on three-time champions New Zealand at Stade de France, igniting a nationwide celebration of rugby, its values, and France.

Two years out from the opening match, preparations for the tournament, the second to be hosted in France after RWC 2007, are ahead of schedule. To mark this symbolic milestone, fans around the world are joining stars in a special show broadcast live from Paris on France 2023 social channels (https://bit.ly/3hetSqR) at 18:00 CEST today.

France 2023 ambassador Sébastien Chabal, France’s Antoine Dupont, and New Zealand’s two-time RWC winner Dan Carter among others will share their excitement for a tournament that will innovate with tangible social and legacy programmes.

The show will also feature the unveiling of the official Gilbert Rugby World Cup 2023 match ball, which design symbolises the special unity between rugby and the French host cities that will provide the welcoming backdrop to the teams and fans from across France and around the world.

Speaking ahead of the celebrations, World Rugby Chairman Sir Bill Beaumont said he believed that France 2023 will advance rugby and society.

“In two years, France will be the centre of the sporting universe. Rugby World Cup 2023 will be the most impactful and sustainable rugby event ever, delivering a meaningful legacy that reaches beyond economic and rugby growth, and an embodiment of our core values.

“The players are at the centre of our planning and in addition to increased rest days and squad sizes, the world’s top players will have everything they need to perform to their best on rugby’s biggest stage with world-class match venues and training facilities.

“If the players are the heart of the tournament, then the fans will provide the heartbeat, energy and emotion and we want them to have the most incredible experience in stadia, across the host cities and at home watching the drama unfold.

“France 2023 is already shaping up to be the most popular Rugby World Cup ever with more than one million tickets selling within a matter of hours and more to go on sale this month. We can’t stress it enough: everybody is invited!”

France 2023 CEO Claude Atcher said: “In just two years we will kick off this much anticipated event for the hundreds of millions of fans of this very special sport. All are welcome to the French regions both on and off the pitch for this 10th Rugby World Cup. Much more than a match, the opening encounter on 8 September 2023 will be a dream come true.

“France 2023 is getting ready every day for an extraordinary event of exceptional high standard: 730 days to bring an exemplary sporting event into reality, one that will raise the bar in terms of economic, social and environmental innovation.

“Our mission is to leave behind the best legacy we can. The adventure will continue beyond the final whistle. In putting the organisation of this event at the heart of the territories we have taken on an essential challenge: to make sport central to the building of social connections.”

With more than one million tickets already sold, Rugby World Cup 2023 is proving extremely popular among rugby fans around the world. The next ticket sale will begin on 28 September for members of the 2023 Family and on 30 September for the general public. For more information, visit https://tickets.rugbyworldcup.com.

The two years to go celebrations cap a busy week for the tournament following the announcement of TF1 as the tournament’s broadcast partner in France, Capgemini as a Worldwide Partner and Facebook as an Official Supplier.

About Rugby World Cup France 2023:
Rugby World Cup 2023 will take place in France from 8 September-28 October with matches played in nine venues across 10 host cities. The tournament will be the 10th men’s Rugby World Cup and the second to be hosted by France after a memorable event in 2007.

RWC 2023 will take place in a year when the sport celebrates 200 years since Rugby School pupil William Webb Ellis was credited with inventing the game of rugby football by showing “a fine disregard for the rules” in catching the ball and running with it in 1823.

RWC 2023 will set new standards in social responsibility, inclusion and sustainability for a major rugby event, targeting four key pillars for the tournament’s legacy: acting for sustainability and circular economy, supporting education, training and employment, respecting and protecting the environment and promoting inclusivity by being a champion for gender equality.

The showpiece event in men’s 15s, Rugby World Cup 2023 will feature 20 teams – 12 of whom qualified directly by finishing in the top three in their pool at Japan 2019 and eight from a global qualification process – with 48 matches played across 51 days.