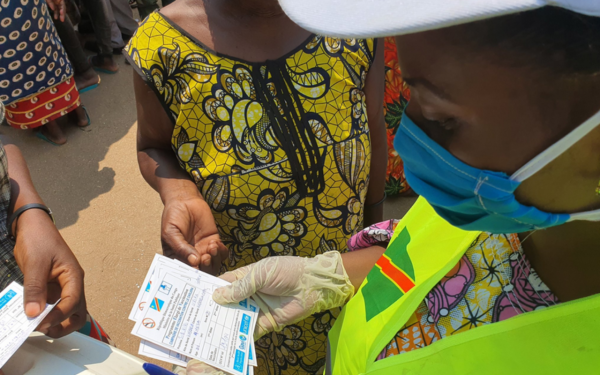 The Democratic Republic of the Congo today launched a massive cholera vaccination campaign targeting 2 million people aged one year and above in three provinces in the east of the country to halt an ongoing outbreak.

The campaign is being caried out in Haut-Lomami, South Kivu and Tanganyika provinces—the most affected by cholera since August—and will cover 13 health zones with about 4 million doses delivered by the Global Task Force on Cholera Control. World Health Organization (WHO), United Nations Children’s Fund and other partners are supporting the health authorities to roll out the campaign. Gavi, the Vaccine Alliance, provided operational funding.

Around 3600 health workers including vaccinators and community mobilizers have been deployed to carry out the campaign which will run for six days. Since the start of the year, the Democratic Republic of the Congo has reported at total of 8279 suspected cholera cases and 153 deaths in 16 of the country’s 26 provinces.

“Cholera is a dangerous infection that can kill within hours if untreated, but it is predictable and preventable. In addition to the vaccines, which are one of the effective measures against the disease, it's also very important to provide clean water and to reinforce hygiene and sanitation in order to prevent the outbreak from spreading further,” said Dr Amédée Prosper Djiguimdé, WHO Officer in Charge in the Democratic Republic of the Congo.

The ongoing vaccination is the second massive campaign in the country this year. In March and July, more than 1.4 million people were vaccinated against cholera in Haut-Katanga province in the south-east of the country.

Cholera is a highly contagious disease transmitted through contaminated water or food. It causes severe diarrhoea and dehydration that must be treated immediately to prevent death, which can occur in just a few hours, and to prevent the disease from spreading on a large scale in a high-risk environment.

Disease surveillance, improved water, sanitation, and hygiene services as well as early detection, treatment and vaccines are crucial in preventing cholera and containing infection spread. Coverage with a full two-round dose of oral cholera vaccine provides up to a five-year protection.

Distributed by APO Group on behalf of WHO, Democratic Republic of Congo.